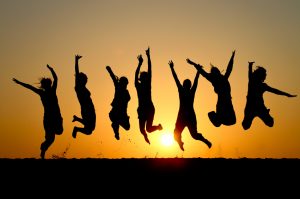 If You Don’t Eliminate This Habit, You Will Never Grow ~ I had to stop doing this to finally start being consistent.

For many years I had a problem that I did not even know about. It hampered me in countless situations.

It cropped up often enough to derail any progress that I made.

And now that I know about it, I see it in nearly everyone around me.

Most people that I meet do this: friends, colleagues, and acquaintances.

I had not thought about it much, until relatively recently.

But if you eliminate this habit, you can crack the code of consistency. You will be able to move forward in ways that you cannot even dream of now.

If you learn this, you will be unstoppable.

The truth is this: most people celebrate too early.

I re-learned this lesson while reading, of all things, a book written for kids. My man Luke Mardigian recommended a book that I should read with my son: The Way of the Warrior Kid, by Jocko Willink.

The book’s premise is pretty simple: a young boy who can’t swim, gets picked on a by a bully, can’t do multiplication tables, and can’t do a single pull-up is visited by his uncle who is a Navy Seal. The uncle teaches the young boy how to improve and change.

It is a great story for kids… and adults.

At one point in the story, the young boy does four pull-ups. He gets so excited and starts celebrating. He had never done that many pull-ups in his life!

The Navy Seal was not as excited, because the job wasn’t done.

The goal was 10 pull-ups. The boy had done four.

No celebration. Not yet.

Don’t Celebrate Until the Job Is Done

“Knowing where the trap is… that’s the first step in evading it.”

Most people have a mental release when something good happens to them. For some reason, the pressure stops and there is relaxation.

And for most people, the tendency to celebrate too much is a habit.

Jocko Willink’s message is powerful: don’t celebrate until the job is done. Small victories along the way are good, but the winning the war is imperative.

Do not let the small victories get in the way of the bigger ones.

While the young boy in Willink’s Warrior Kid is ecstatic that he did four pull-ups—yelling and screaming in excitement—the Navy Seal calmly says “Good” and keeps pushing.

The huge celebration in the moment is not worth the possibility of derailing your chances of success.

Stop giving up what you really want for what you can have in the next few moments.

Violations of the Rule

“The art of being wise is the art of knowing what to overlook.”

Most people do not like doing the consistent work that leads to success. So the first taste of victory is a welcome justification to stop doing the work.

That is a mistake. And I have made this mistake countless times.

“Don’t blame the hunter if you aren’t paying attention enough to spot the traps.”

Many years ago I heard a story about an ancient Spartan warrior who won the equivalent of the modern-day Olympics. For his victory, the warrior received an incredibly valuable trophy. It was nearly priceless, adorned with gold and jewels—a magnificent work of art that symbolized the champion’s victory.

The warrior graciously accepted the incredible trophy. It was an awesome symbol of his victory.

The day after the competition, the warrior sold the trophy. And then kept training.

The trophy was an expression of how other people felt about this warrior’s achievement. But the warrior was focused on his own internal barometer of success.

Do not let the celebration of any victory distract you from the bigger picture.

When someone congratulates you for a small victory and tells you that it is “AMAZING!”—calmly remember Willink’s Navy Seal and say to yourself: the milestone is “good” and keep going.

Consistency Is The Only Skill That Matters

“Consistency is more important than intensity.”

Consistency will turn into excellence. This habit of celebrating too early can derail us. Eliminate it and move forward.

Celebrate when the job is done. Take care of your business and move forward.

It is not about the celebration. It is about victory.