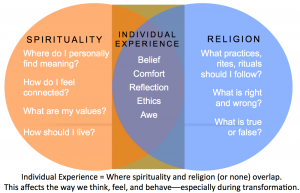 I had a lovely person yesterday on my strategy call. The call was fun with a lot of real laughter, until the topic of spirituality came up. Then it became hellishly painful.

The issue is: what is spirituality? How you view spirituality will have a lot (maybe everything!) to do with everything you do in life, and ultimately will determine to what degree you’ll become all you can become.

To recover from the call, I listened to a podcast, an interview with marketing teacher, Eben Pagan.

During the call I measured Eben Pagan’s vibration, vibration 300, and I measured the vibration of the interviewer, Michael Simmons. Vibration 170. 2

Their conversation made me see more than I had seen before, what vibration actually measures.


Your vibration number measures to what degree you penetrated reality. The more the higher your vibration.

Reality: collective hunch at best, quipped a famous comedienne back in the 80’s.

And you cannot do better than build your whole life on that “quip” if that is a word.

Any sense that you know, any sense that you are certain is a sign of low vibration. And yet, people who diligently work, through reading, through living a life of experiments, make better choices, even though reality is collective hunch at best. 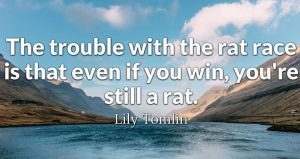 But some hunches are better than others, and you can see that AFTER you chose…

This is the cornerstone of a life lived as an experiment.

People who live their lives differently are perpetually unhappy with an occasional fun moment here and there.

Living life as an experiment has requirements, that most people are unwilling to “provide”.

One ingredient, one requirement is being awake, being aware.

If you watch people, they live as if life is a thing… and things move really slowly. I remember T Harv Eker making us, all 2,000 of us, laugh when he said “sh*t comes at the speed of sh*t” or something like that.

90% of the audience was high on some manifesting idea, where things manifest at the speed of light?

Harv taught some methods that when practiced, make life turn around in unexpected ways. The manifesting people, and maybe all the people, were still sitting around, doing what they have always done, hoping to have a different future.

30 days after the Millionaire Mind Intensive, I was 30 grand richer, but they were the same. 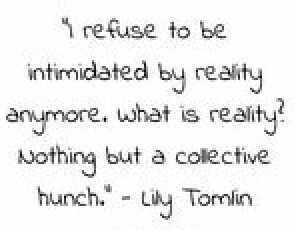 My hunch was to go with what Harv taught. Their hunch was to do what they have always done. That is the ultimate measure: do you go with your hunches, or do you go with the hunches of someone who has done what you want to do, and succeeded, over and over, again and again.

To raise your vibration, to penetrate reality further, you need to study, you need to experiment, you need to look wider and further than you have done… every minute or every day.

If you fill your day with inconsequential stuff to the rim, you won’t have a lot of time and a lot of energy to grow.

On Wednesday I bought a mug that says: “If a woman’s work is never done… why start?” I stood all my 70 year old little self standing in the middle of the supermarket, laughing. Loud…

I shared it on my Talk to me webinar. One of my students said she didn’t like it.

She didn’t laugh. She fills her life, I think, with housework, taking care of others, activity that will keep her where she is. Not happy. Not fulfilled. Not growing.

I have been forming pairs of accountability partners.

Accountability, the way it is used in self-improvement, in business, is a declaration that you are responsible for all of it. That the buck stops with you.

It is, of course, a state of mind, an attitude, an approach to life that makes no sense: meaning the mind cannot wrap itself around it.

There is a Landmark Forum Leader, Angelo Demilio, who is the archetype of accountability. His management style is: make it harder to face you than actually doing what they said they would do.

And your growth in life depends on both. 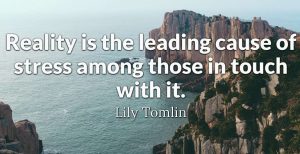 I have known an accountability partnership team, that over almost 10 years, grew a business to 10-fold without breaking a sweat, without campaigns, without ever flailing.

Something happened that interrupted this dynamic, and their company is in freefall.

I was excited about having a coach, a few months ago, because I considered our relationship an accountability partnership. I was mistaken: there was no agreement.

In his mind my job was to do everything HE said, not everything I said.

Some people are shameless, and aren’t suitable to be in an accountability partnership. Their integrity is non-existent, and they cannot be trusted to do what they said they would do.

You need an integrity score of at least 10% to be able to be accountable: i.e. to feel shame when you don’t do what you said you would do.

These and other elements of the invisible reality, what I call spirituality, are what I measure in the Starting Point Measurements, so you know what you need to grow.

Guaranteed to keep you miserable.
.
.
.
.Recommended reading: A universe of 10 dimensions