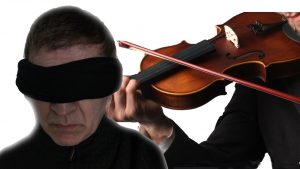 The other day someone posted a comment on my site. I expected it to be intentionally hurtful, and I treated it as such… But in the meantime I pushed it around in my thoughts and reconsidered.

It is a valid question… He asked: How do you know you are an empath?

Really, how do I know?

Now, the question could come from: 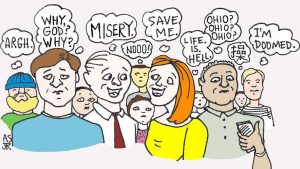 To answer it, I have to go way way back in my personal history.

Then came the dark years… the episodes of depression, the desire to die, where no medicine helped because, as I figured out decades later, the feelings weren’t mine. 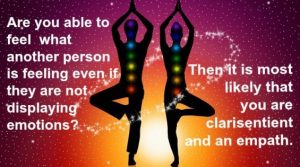 Knowing my feelings, my preferences, my tastes, what I wanted was impossible to know… I really thought I was mentally ill…

Then many years I was just feeling miserable… An ever changing inner landscape with storms of anxiety, fear, disgust, anger, hate, resentment… have no idea how much of it was mine.

I met this dude in the year 2000. He was a medical student much younger than me. But he knew words and worlds that didn’t have anything in common with what I even suspected existed. We shacked up, and he took me where he went. 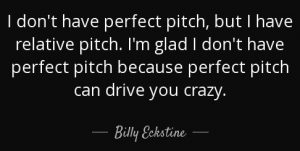 Then I was in the room when he was sent some strong attunement energies by his guru, and I had seizures from it… It was interesting and made HIM think.

Of course because of my innate curiosity, and enormous appetite to learn new things, I had names for things, and I knew what I was talking about… 1

Clairsentience, which means clear sensing, is the ability to feel the present, past or future physical and emotional states of others, without the use of the normal five senses. Psychics who are clairsentient are able to retrieve information from houses, public buildings and outside areas.

What is the difference between an empath and a Clairsentient?
Empathy is an intuitive psychic gift. It is the capability of picking up someone else’s feelings. A true empath who has the gift of clairsentience can actually know exactly what someone else is experiencing. Clairsentience that manifests as sympathy or heightened empathy can cause the psychic some emotional issues.

Clairempathy (clear emotion) – An Empath is a person who can psychically tune in to the emotional experience of a person, place or animal. Clairempathy is a type of telepathy to sense or feel within one’s self, the attitude, emotion or ailment of another person or entity.

All these are hearsay, second hand knowledge, translated with the current state of knowledge of the world.

Only someone who has these gifts, or curses, could tell, but, of course, a true clair anything has too much going on to be sure. If you are sure, then you are either a liar, a con man, or delusional.

Feelings, emotions are not clear cut, their names is mighty confusing, and feeling another’s stuff is unpleasant, or horrible.

Your own feelings, your own emotions cannot guide you, because there is no difference between theirs and yours.

I muscle-test if a feeling is mine or not. Lot of work.

So the feelings that can clue me in who I am, what do I like, what do I want are not reliable… I am forever entangled with others.

I was studying Kabbalah and was supported, weekly, by a Kabbalah Centre guidance counselor. One day she said that you can always connect to “The Creator”… it is like connecting to electricity.

So I did. And then, shortly after that I watched a woman teach connecting to that same place, without the sound, and I knew exactly what she was doing, and could do the same. Inside.

Then I listened to the words, and could hear that the words don’t take you there… hm. interesting.

But I found out that if I muscle test while connected to that place, I have come to call Source or All-Knowledge, I could glean a lot of answers, so I started to spend hours a day to ask questions.

I don’t know what this has to do with being an empath, or any of those “claire” whatevers, but this is mostly what I do today: penetrate the world that underlies the visible reality.

Life is unpleasant for me, lots of pain, but this part, the channeling part is delightful, maybe even joyful.

I am naturally curious, discovery, experimentation, distinguishing are what makes it worth for me to live… even if it is just a small part of my day. When I think of anything to lose when I die, that is what I would regret to lose.

Does this answer the question?

Please let me know. If it is a no for you, it means to me that you were really asking a different question. 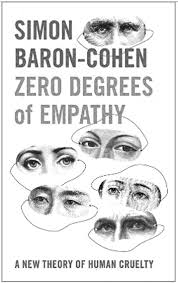 Just one more thing: lots of people write to me, angry, asking: On what authority I judge their guru…

On my own authority… but I don’t judge them, I assess them, I measure them, with the help of All-Knowledge. It is not my opinion that I write down… I often have no opinion. I am a channel, remember? A channel.

PS: lots of people who are empaths write about, for example, empathy…

This is a bad sign, a sign of desire to receive for the self alone… When I measure their Starting Point Measurements, their “about you” measure is sky high, which shows two thing: they are the alpha and the omega for themselves… They are a closed circle… not open.

And because they focus in on a topic that is all about them, the truth value is low… by virtue of their narrow cone of vision, both in width and in depth.

Their desire overpowers their ambition, and they never grow, never evolve.

Another group of “authors” who write about empathy are second-handers, moochers and looters… enough said.

If you have a “gift/curse” and you don’t use it for it was given to you for, you are on the Dark Side. No ifs or buts.

4 thoughts on “Readers ask: How do you know you are an empath?”