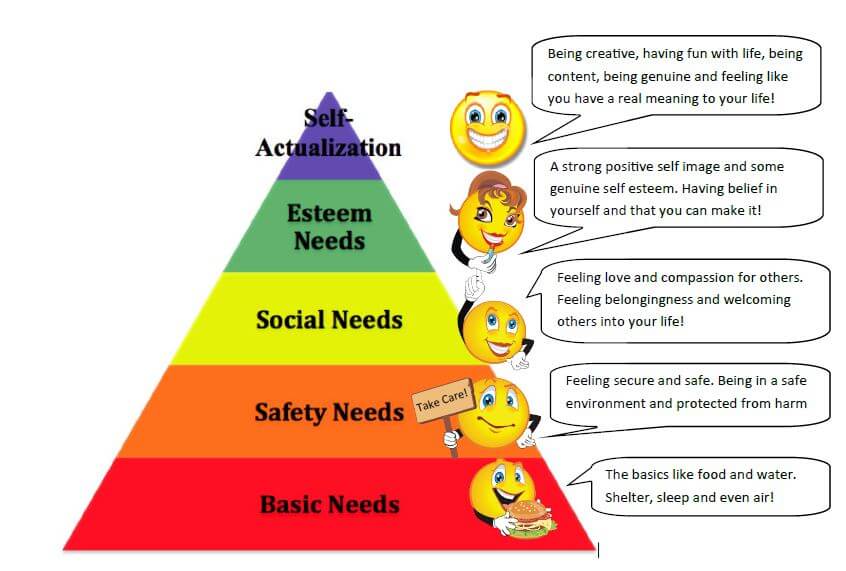 No one looks at Maslow’s Hierarchy of Needs as showing you what you need to work on next.

And given that only a minuscule percentage of the population ever reaches the higher levels of the needs, that is a stupid thing to do.

Ingenuity? You surely don’t have that. You can argue, you can fight, you can yell, you can complain, you can run away… but ingenuity? Not something you engage in.

What is ingenuous? the quality of being clever, original, and inventive

I am originally trained as an architect… In a class of 96 people there was one guy who was clever, original, and inventive. He quit in our second year, and still made it in the world.

And yet, there are some ingenuous people in profession, but there are mighty few who can become that… and be clever, original, and inventive in every area of life.

But no matter where you start, you have to start somewhere.

One of my clients who is under the thumb of obligations, expectations, tradition, etc. wants to develop a Self. The highest level of Maslow’s hierarchy.

But of course unless you bring ingenuity to the issue… it will not happen, it cannot happen.

Steve Jobs is an example. He was ingenious at work, but he was a bruiser at home, and maybe other places too. Never manage to develop an integrating principle, a Self. Died a broken man.

Being able to retain independence and release a leash by family, bosses, clients is an art.

The tool the power person uses is using your tendency to be attached, to take things personally.

As long as your “about you” score is high, you are vulnerable to manipulation, to be forced, coerced, cajoled, and lose your chances to become a person.

You even have a silver bullet… if someone calls you that, all bets are off, and you are as good as gone.

Mine used to be called “selfish”. Being accused that I have a personal benefit in anything… Obviously I am from a communist country where self-interest was frowned upon, but in the 30 plus years since I left Hungary, I have found that the world, even the USA has become tainted with this “socialistic” b.s. driving the parasites, the second-handers, second raters, looters and moochers to have power over others… unless they can deflect the “attack” and stop taking ANYTHING personally.

Working with my vulnerable clients I see that it is easier to talk about not taking things personally that it is for them to act on it. by far.

The other issue is their less of learned skills in deflecting, artfully avoiding biting the bullet.

I will, and probably no one else. My coach kicked me out because I wanted to do business my way. Your spouse, the medical establishment, all of society is against you becoming a person… this is why there are so few in the world.

There are plenty who talk about it, but not from their own experience.

This is the very first job I need to do in any coaching relationship, or nothing worthwhile will happen for you. Money, sex, acknowledgement don’t make up for living in slavery…