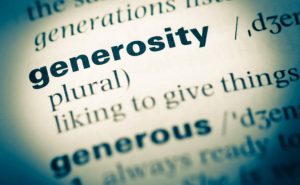 It is a tricky way to be, the full meaning of generosity, because almost no one ever is really generous.

We normally equate giving with generosity. Some give stuff, others give praise, some give of themselves.

Most generosity makes the recipient suspicious: what is the ulterior motive?

And rightly so: culturally, human culture, I mean, generosity doesn’t make sense… only trade does. “I give you this, so you’ll give me that.”

And yet, there are a very few people who are actually generous, and they are happy. WTF, right?

Here is another important question: just like with love, whose experience matters, the giver or the receiver?

I have been teaching that the only way to experience love is to love. That you can only feel your own energy: I, in fact, never ever have felt love from another. Which doesn’t mean no one has loved me, I am talking about the experience.

So is there something similar with generosity? 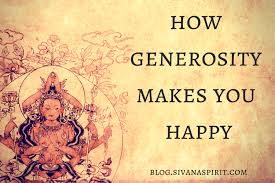 That you experience generosity when you GIVE, not when you RECEIVE?

Real generosity is a life changer.

The moment you are generous, really generous, in that moment, you have overcome ego, or the selfish gene… and you are in a space of abundance, as opposed to scarcity where most people live, where, maybe even you, live most of the time.

Scarcity says that there is something wrong. That you need all you got, and more. Money, love, freedom, liberty, respect, everything. That if you give it away, you’ll have less.

And it doesn’t matter how much you have, the dynamic is the same.

And scarcity is a tough master, it can torture you, and it won’t allow you to breathe freely.

So when you escape it for a moment, or through certain practices, for long stretches of time, maybe hours!, it is a major event.

Because you cross an invisible line, an evolutionary line, between human and human being… however long it lasts.

There are two other ways of being that we talk about frequently, that could be grouped with generosity, because without the leap to abundance they are as impossible as generosity.

These are gratitude and choosing.

Thanking someone isn’t gratitude, just like giving isn’t generosity. What makes it gratitude is the total disappearance of the precious “I” aka ego, for a little while.

And choosing is the same. What you choose is seemingly your enemy: reality. Reality with all its ugly events, bad things happening, etc.

Someone in a comment asked “What were you choosing in this article. …”choose that”, “choose it”

I am talking about nasty things that are happening to me, to my students, to the water, and everyone in between.

The idea to choose that to be the way it is is ludicrous: after all it feels like you condone it, your choosing it perpetuates it.

But that is scarcity thinking. When you resist, fight what is, you get frozen into that mood of resisting: misery. And sometimes you don’t even notice that it is gone…

But that is not the point that it’s gone. The point is to get out of your own way, and just embrace what is.

I have a favorite quote that it took me a long time to fully get… but it was worth it.

I think it’s a mistake to ever look for hope outside of one’s self. One day the house smells of fresh bread, the next of smoke and blood. One day you faint because the gardener cuts his finger off, within a week you’re climbing over corpses of children bombed in a subway. What hope can there be if that is so? I tried to die near the end of the war. The same dream returned each night until I dared not to go to sleep and grew quite ill. I dreamed I had a child, and even in the dream I saw it was my life, and it was an idiot, and I ran away. But it always crept onto my lap again, clutched at my clothes. Until I thought, if I could kiss it, whatever in it was my own, perhaps I could sleep. And I bent to its broken face, and it was horrible… but I kissed it. I think one must finally take one’s life in one’s arms.

Arthur Miller
from the play After the Fall

Embracing what you don’t want, embracing your own life is the generous act of choosing.

Here is an interview with Keith Ferrazzi by Tai Lopez that says a lot of what I discovered in those years, and some.

and here is more on generosity…


and here is another one by James Altucher: