This is part two for whatever day it is. Thursday.

So what I said in the previous segment is that until you can tell the difference between what you say and what the machine says, there’s no chance that you can change your context.

Now, it’s a little bit deeper than that. Because … and that’s why without integrity nothing works.

We humans consider integrity in a very pedestrian way. You don’t cheat, you don’t lie, you keep the Ten Commandments and all that morality issue. But, that is not what integrity really is.

Integrity is that, but it is just the bottom of integrity. The real integrity has something to do with WORD.

And then, with the word, God created the light. It wasn’t a visible light, it was all the light. Everything is light.

Now, what does it have to do with integrity? You are no God; right?

Well, if you really look, you do pretend that you are God.

You say things like, oh, I am a spiritual being having a human experience. Yeah, maybe. The most important thing is that this leg of evolution where you acquire the main and fundamental capacity of God-ness, if there’s such a thing, God-ness, or if it’s a word, God-ness, then

So the wording that Landmark gives it: integrity is honoring your word as your Self. Not yourself but your Self.

Now, you either have a Self or you don’t. Most of you don’t.

The DNA adjustment activates the gene to creatt’s Self… and that gene is not active in 60% of humanity.

Some of you were not created with the capacity on. Why? I don’t know. I read somewhere yesterday, that expecting that different people at different places of the earth would follow the exact path that was described or that created the modern human is a little bit delusional unless it was really 100% in our DNA from the get go, which kind of indicates creation; right? The people who are born this place and that place, are not going to be the same. They cannot.

So anyway, i am going into uncharted territory. I apologize for that.

Not the jumping jack, moronic, inconsistent numbnut that you are being right now. If you are not a numbnut, don’t take it on. Don’t tell me that I told you that you are a numbnut. I don’t know everyone. Lots of people are going to listen to this audio. So don’t get offended.

So there are two kinds of words in your head. Two.

The machine is created by society and just for credibility has added some words from your particular history. Okay? You’re black, you are descendant of slaves, you are Kurd, you are a second class citizen, whatever. Right? That’s all the machine.

You never actually sat down and said,

‘I am going to think that. That is going to make me exactly how I want to be, miserable.‘

No, you never did that. Nobody would do that. Your self interest will not go in the direction of misery. Okay? It’s not. It’s not the nature of self interest.

You consciously, the conscious consciousness, decides to say that. So when I say you mostly never say that, I actually mean it.

Most people have never thought, used their brain for thinking, ever. Not even for a moment. Now, figuring out a mathematical equation; okay? Or whether you are going to have money for a new outfit or not.

Instead of listening to the thousands of voices in your head that act as advisors, and then act on the voices, you are going to actually sit down and look deep and wide and decide who you want to be.

So, if you have never done that, don’t feel bad about it. Nobody taught you how to do that. You actually think you do that. You read a meme and say that’s who I want to be. But then you find out that your actions are not consistent with that.

But that doesn’t mean that you can’t be who you want to be. But not until something happens. Not until you do something. 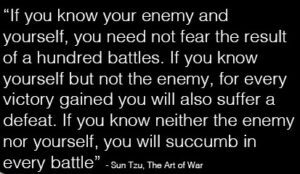 So before you build up your army, which in this instance would be strengthening your voice.

You need to know your enemy. So in the Playground, we don’t learn to create strong statements of self.

That’s not what we do there. We could, but it would be lost in the sea of voices. Instead, we do one thing and one thing only.

We distinguish the enemy.

Declare who you want to be and then hope or be able to keep it in existence alive, operative, working.

Ultimately, you cannot get rid of your default context. I always hoped that you could, but no, you can’t. It’s almost embedded in muscle memory and everywhere. But you can counter it when you have distinguished the art … no, sorry. When you are artful and masterful at recognizing what’s not you and what’s not your voice and when you speak, declare, and bring persistence and insistence and consistence to keeping that declaration in existence, keep it alive.

See, the shelf life of a declaration without all this foundation work is about two and a half seconds.

You see, when you have a strong relationship between your word, your self, and your actions, that’s when you have started on the path of becoming a human being. A human being is the God level of human.

At this point, there is not even one. I am close but not hundred percent consistent; okay? So that’s where we are going. And that’s where it’s heaven; okay?

Now, is it heaven half way through? Yeah, kind of. A lot of the time, yes. All the time? No. No. All the time is when everything that you hear in your head is noise and your actions are always consistent with who you declared yourself to be.

So how do I know I am not there?

Because all this series of illnesses and misfortunes and accidents came to me as a punishment because I haven’t been a hundred percent true to my word. I haven’t honored my word as my Self.

And I was cheating on my diet. I was comfortable. I was this, I was that. Okay? So I said I would do something and I didn’t. Okay? So I am now awakened with a swift, swift kick in the butt and I am getting back on the pony.

All right. So you need to do the foundation work first. You can’t be where I am. This is the result of 40 plus years of work; okay? There’s no jump in reality.

If you want to start, start with the Integrity: the power of your word.