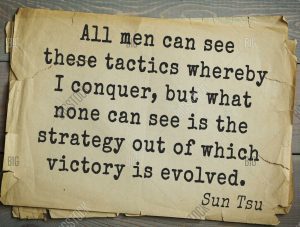 My notes:
If you feel like you want to transcribe this audio and let me have it, please do so. I’ll appreciate it and you’ll learn ton from it.

Miko transcribed this audio: thank you very much, Miko!

So this talk is going to be about the difference between strategy and tactic.

I’m not going to define it for a second.

When you look, you are looking for some help when you come to my site. You want to know what’s your vibration and you ask how to raise it. You look at the Starting Point Measurements, and you say: “maybe I should bla bla bla.” But when I ask you why did you come and what are you up to, you have no answer. And that is a dead giveaway.

So strategy – here’s the definition, MY definition – strategy is the long-term, many-steps plan towards a distant goal.

Now, goal is definite. It is not just a direction, but it has an end state that you can measure clearly, and you know when you reached it and when you didn’t. So, for instance, in any game, you know if you accomplished a goal:
– in basketball – throwing the ball through the hoop;
– in golf – having the little ball, the golf ball, in the well is better than outside of it.

So when we talk about goals, a goal is a final state that you can tell if it succeeded or it didn’t. And when I ask you, some people have a vague definition: “I want to be a billionaire” or “I want to be a millionaire”. And in their mind’s eye they can see themselves having a ton of money and a private plane, but no path. None. And that is one type of person. Which means they have an end vision, but no tactics, no path, no many steps – no steps. And their behavior is that they mostly already enjoy the fruits of their nonexistent labor in their mind, which means they are trapped in a desire trap.

Tactic is the steps. Each step, each tactic, is a unit of its own, but without a strategy, they go and take you nowhere.

When you look in the world, most people who sell information products or courses, they sell you a tactic. Partially because they don’t hang out at the beginning point and at the end point long enough to craft a strategy that is a good fit.

So what am I talking about? First of all, if you don’t hang out long enough in where you are, looking and attempting to define precisely – which means start to see what’s underneath your complaint – you will only have tactics.

So what am I talking about? You are going to live in a world where most people live, of “there is something wrong here.”

That is the fundamental context inside which people live.

That is the bottom line, there’s nothing underneath that. Actually, probably there is: the requirement from the genes to stay alive and look good. So that’s the bottom line.

But right above that, your survival is always threatened, whether it’s literally or emotionally – you feel like it.

Which means that if you really look, you always… unless you start to path towards becoming a human being, because human beings don’t live there. They are still dominated by surviving and looking good, but not that there is something wrong here.

And unless you examine that minutely, you are not going to have a healthy starting point.

In my work with people, who I work with, that sometimes takes a year of coaching, to be able to help them distinguish – distinguish! – where they are at, what’s their starting point, instead of where they think they are.

What you think about yourself is very very far from the truth. It’s all emotional, and there is nothing factual about it. And not mentioning the fact that you got where you are through 20, 40, 50, 60, 70 years, and you really need to see it.

But to be able to accept that… First of all, if you do it too fast, it’s very unsettling. You may even go mad. I did. And even then, just one of those was pulled out of under me like a rug: the “what’s wrong with it,” or “there’s something wrong with it.”

And even just one of those being pulled from under you like the floor, you are going to not be able to handle it. So that’s why it takes so long.

And you may get impatient: “I am paying all this money for coaching.” But that’s just how it is. It is the hardest thing to face. Especially if you want to be somewhere else.

You are going to be impatient that you are not already there. And that is everybody. So for example in the Landmark Forum, the first 3, 4, 5 programs, more than a thousand dollars – and it’s not even 1-on-1 – are going to be all about you being able to define where you are at.

But unless you do that, find out where you are at, you are never going to be able to develop a healthy strategy that can be repeatable and that can stand in the test of time (sustainability).

The second sticky point, of course, is where you want to be. And given that you’re thinking from the place that’s imaginary – “I am here, I’m talented, I’m smart, and I’m this and I’m that” – what you imagine for yourself is going to be standing on a mirage.

So right after we define where you’re at, we are going to start to work with where you want to be. Sometimes I have to do these two definitions concurrently at the same time, because you so resist looking.

So who are the people who are most dangerous for your well being and for coaching and for your vibration?

They are going to be deadly for you.

So, with that said, what happens if somebody accidentally gets what they would like? Like a better job, a beautiful husband or a beautiful wife, or a pile of money – what happens?

Because they have no strategy, because they don’t know who they are, because they don’t know where they want it to be, it is going to bite them in the ass. That is pretty much the reason why there are people who have one book, people who have one movie, and people who come up like a shooting star and then disappear. The 10 minute or 15 minute fame people – that’s what happened to them. They didn’t build on anything, and they’re not going anywhere. So you don’t want to be that, and you want to start doing the work for yourself.

Now, what happens if you can’t afford my not-so-high prices?

You can actually get into my Reclaim program. It’s $15 a week, and if you can’t afford $15 a week right now, you can give up coffee, and buy caffeine tablets instead. I sometimes do that. I make coffee at home, and even making coffee at home is about as expensive as my weekly coaching program.

And there you get to be taken to a different journey every day, and report back to me, and I give you nudges. I nudge you towards looking, and I nudge you towards knowing yourself. I say things like “you are looking through a narrow cone of vision”. I say: “you went to your mind to look for an answer.” “You didn’t actually listen, you immediately interpreted what you heard.” “You are not looking at the vocabulary that Tai uses, you are translating it to your own,” and things like that.

That’s the kind of feedback I give you. And, believe it or not, that little feedback that I give you, is going to start to help you look at who you are and how you are, and what you do, and prepare you to be able to look the tiger in the eye: “I am this kind, because I have these beliefs, I have this interpretation,” etc.

The second most effective method is my year-long Playground. In the year-long Playground, you do almost exactly that, except the frequency of the nudges is going to be much rarer. So you pay $150 for a year, (I don’t know what I was thinking when I priced it, so I may raise it by the time you hear this) You talk to your partner who has a different background, different ethnicity, hopefully, different country even, and different expertise, and you are going to be nudged out of the rut that you are in. It is priceless. I think that the best part of that program is you talking to the other person, EVEN if the other person is not smarter that you are, even if the other person is not more of an achiever than you are – you really get to see yourself. And that is one of the goals.

If you don’t see yourself, any strategy that you build on where you think you are is going to be misdirected. So I don’t know if you see more about the difference between strategy and tactic, but if you don’t, then I request that you send me either personal emails or comment on this post, because this is so crucial. OK? So this is it for now, and I’ll see what else I can see on this topic in another talk. Thank you.

The difference between strategy and tactic

strategy: long term, many steps, towards a distant goal. sustainable.
tactic is a step that without a strategy goes nowhere. not sustainable, not scalable. 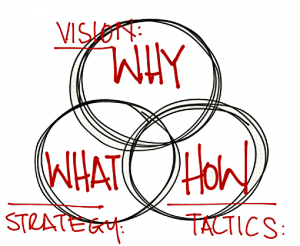 if you don’t determine where you are and where you want to go, you will only have tactics… short sighted actions that feel good but don’t gel into an overarching strategy 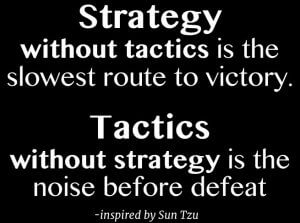 The sticky point is, surprisingly, having to bring clarity to the starting point. Why?

Because of your base context that is always there: there is something wrong here… with you, with them, with it. 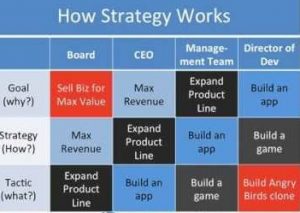 so you don’t want to look at that… you just want to fix what feels wrong. 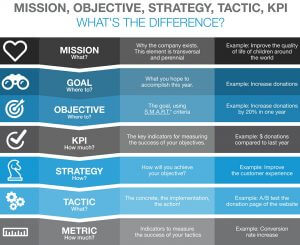 even if you can move, it will bite you in the ass