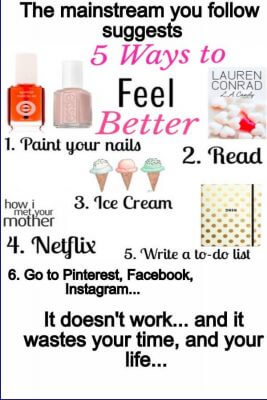 I had an experience this morning that made me look and made me ponder.

The number of times my site is recommended by google has dropped to one third in the past two-three months.

So I looked up my stats software and I found that I had 51 visitors from Pinterest. They stayed anywhere from 1 second to 3 seconds, meaning: they weren’t interested in what I have to offer, not in the least.

OK, why am I sharing this? What is the relevance of this for you and for me?

There is this human need to fulfill others expectations of you, to be well thought of, to be supported, or at least allowed you to do your own thing in peace. Google expect me to fulfill its expectation of what a valuable site is…

We started to need this when we were babies… and we never stopped needing it, to our detriment…

But… do you actually know what others’ expectations of you are?

We think we know, and we are always wrong. Dead wrong. Disappointingly wrong.

One day, one of the Thursdays, she asked her husband: what would make you satisfied that I am a good wife to you?

The husband answered: One home cooked meal a week would do that for me.

I remember crying. It hit me hard, the gap between what I thought husbands wanted and what she said her husband answered.

In 1992, my mother came to visit me from Hungary. One night I took her to see the New York skyline from the other side of the Hudson… The Palisades, spectacular view.

In the darkness of the car, she asked in a small voice: Was I a terrible mother?

I didn’t expect this question. I didn’t answer for a long time… I was too busy remembering all the horrible things she did to me growing up. But then generosity and compassion won out, and I said to her:

You were the perfect mother to me, because, you see, I turned out… And I am OK.

I put a smile on my mother’s face for the rest of her life. She died shortly after her visit.

I had learned from one of my mentors, that parents want one thing from their children: to make it.

It is really the Selfish Gene that wants that. That is the parent’s number one concern.

And as it turned out, my mother was also interested in me doing the dishes from time to time… more than I was already doing it.

All your imagined requirements from others, the way you imagine they expect you to be, are YOURS.

All of them increasing your about-me score, crippling you, rendering you unhappy with yourself because you are not fulfilling their expectations you made up that they had.

When I look at Pinterest: I see women clipping recipes they will never cook… buying clothes, shoes, that only THEY care about, pretending that they want to be pretty for their significant other… but it is a lie.

Cooking one hot meal a week, even if it is the same recipe every week, paying attention to the other, allowing them to speak without interruption is a lot more than any woman nowadays give their husbands.

What husbands don’t give? I am not sure. Maybe pitching in to do chores, picking up the child occasionally from school so your wife can be on a whole webinar they paid to attend? I have very few married students, which doesn’t surprise me.

One of my students, still lives at home, and he reports to me. proudly, every time he does a chore, or helps his mother in any way. It feels like a slap in the face to me.

I live in a big apartment, and I have fantasized about renting one of my rooms in exchange for chores… but I am realizing that people value their time, even if it is browsing Pinterest, higher than doing what would make their lives better, or their housemate’s life better…

We live in a time where it is all about you… Even if that attitude renders you stupid, ignorant, and inconsiderate.

Who I want are people who know that they have everything to do with their own unhappiness, depression, or lack of health. And they are willing to do what they need to do to change that…

OK, so that is what I want.

But what do people say they want who would be willing to choose with one method and stick with it?

You see, as long as they use Pinterest, Facebook, and short articles, and other drugs, they either don’t know what they want, or they hope that those hours, weeks, months, years, will take them where they want to be, happiness, peace of mind, vitality… without them needing to apply themselves…

Every year you spend in that hope makes your brain atrophy more… No kidding.