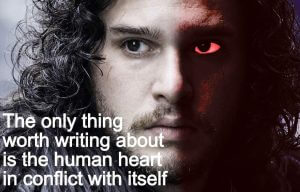 “The only thing worth writing about is the human heart in conflict with itself” said William Faulkner. I agree, even though the language, the vocabulary is imprecise.

The “heart” is one self, and the other self is the precious “I”, the delusional “I”, the lower self.

The conflict, the struggle to make those two selves align, as William Faulkner says, is worth writing about… because it is like a hero’s journey.

I call it “soul correction” because I am firmly rooted in Kabbalah’s view of life. But it is the same thing: bringing the two selves in harmony so they cause synergy that allows living a life worth writing about.

My work, the work I intend to do in all my articles, in all my courses, in all my conversations is to cause people to move their lower self closer to their higher self… to cause their two selves getting closer every day.

It sounds easy, but it is not.

The influences on the lower self, your public self, are so many, so difficult to recognize, that it is neither fast nor easy to bring people’s two selves closer to each other…

The linchpin issue is what we might call a case. What, I think, Dianetics called engram. What Landmark, maybe, called your racket.

The linchpin issue is not easy to identify. It seems that there are many issues… and it is hard to know how to recognize it, how to pinpoint it.

It could be all and neither.

Some people I have known for five years and yet I can’t quite put my finger on their case. Sometimes because it is so simple and yet it makes such a big difference.

Here is an example: I have had two people with the soul correction “Silent Partner”.

Both have an extremely high emotional reaction to the possibility to do something wrong. They only want to do the things that are right… (not wrong!) and therefore refuse any suggestion, any help, any learning that would want to tell them what to do.

Why? Because they want to do what THEY SEE as the right thing, and they CANNOT SEE what they haven’t done yet, whether it is right or wrong.

We could say these are the independents of humanity: they insist to learn only from experience, even if it kills them.

I once had a client like that, before I knew anything about soul correction… I had a big space inside my rental, and to make it pay for itself, I offered it to this dude who was a musician in exchange to a part of his profit.

I had only one condition: he needed to run every idea through me, so I could be sure the space at least pays for itself… about five hundred dollars a month.

He refused. He said: I want to be able to make all the mistakes I can make… So we didn’t have a deal. Looking at his track record, all his successes were due to someone else’s decisions, all his own decisions were losers…

This is your typical Silent Partner.

Now let’s see this case thing, particularly the Silent Partner case in light of what William Faulkner said about the heart battling it out with itself… however schizophrenic that sounds.

The soul, the higher self knows that the way to live life is to use every opportunity to be and become the best you can be. That is the same in every soul correction, by the way. There may be individual flavors, but the individual flavors seem to come from another source, maybe the Zodiac? I am not certain, but that is the most likely source. 1

So the likelihood that an uncorrected “Silent Partner” is going to live a life not worth writing about is near or about 100%.

I have stopped taking clients whose soul correction is “Silent Partner”.

Another difficult soul correction is “Finish What You Start”.

What is their case, across the board?

I have only a few cases to judge from, by my hunch is: they refuse to be the average guy, a human. They decided, at some point, that they need to be superman, superwoman, and they believed their own myth after teaching it everyone around them.

I have never met a successful or happy “Finish What You Start” person.

The strait jacket their self-created myth puts on them is a yoke. They cannot just do things, the have to DOOOOO things… fast, immediately brilliantly, and, or course, that is impossible.

So they live a life of no integrity, appearances, and no authenticity.

I admit, it is very hard to go back to the beginning, to the foundation, that is missing for them all. They never built any: assiduity is inconsistent with Superman. And even when the job requires them to just do it, they are unhappy, because they feel they are supposed to do something big and significant.

I don’t like to coach “Finish What You Start” people because they will lie to me. They will try to sell me the myth, and I am not a buyer for myths.

I have shared with you my two least favorite soul corrections, for one reason only: so you get that it is not an accident that most people’s life is not worth writing about…

Unless they are, of course, in training to learn about their case, and start conquering it.

But if you can’t be proud of yourself, if your two selves are not embracing, at least some of the time, then you live a life, that Wallace D. Wattles calls wretched.

They become intensely interested in their feelings instead of what there is to do. And then seek help for their feelings, as if the feelings were the cause of their misery.

The feelings are not the cause of your misery, they are effects themselves.

Many of you may feel it is some person or persons that keep you unhappy… and although they may be brilliant at jerking your chains, like A’s daughter, of M’s wife, or a different M’s mother, the chain jerking is not the issue. The issue is where you are looking.

I’ll say that again: The issue is where you are looking.

As I said in my last article, yesterday I think, your most important tool of being a person is your attention.

Most people follow their attention wherever it goes… but hardly ever direct it.

I learned during an eye examination that I was one of those people. And then I started to learn to control, direct, restrict, redirect my attention to where I wanted it to go.

Many of the spiritual practices I give to my clients and students are to teach them to control and direct their attention.

Most misunderstand and never become a person… Why?

In some weird and wretched way, it is comfortable to remain a victim.

It takes being a self-starter, it takes having a big enough fire in your “heart” to do the exercises day after day, even though you know how to do them.

I know how to do a lot of things. But unless I do them, day in and day out, my knowledge won’t do anything to me, won’t allow me to live I life worth living, live a life worth writing about.