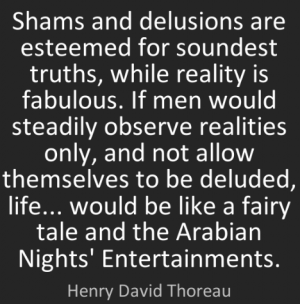 It’s not what you could see, hope to see, it is what you actually see, consciously, that define your actions and therefore your results, your thoughts, your mood…

What you see is called “occurrence” and is made up of a little bit of reality, and an awful lot of words.

Words that explain, words that interpret, words that give meaning of what is actually happening: reality.

What is Reality? Collective hunch at best, but we can define it in a funky way: everything that a just arrived Martian can see! Then stick to that definition, like the seasoned umpire sticks to his… I’ll explain it later…

If I set out a caption contest, everyone would give me a different caption, depending on what they see. And you don’t see things as they are (reality), you see them as YOU are… full of meaning, interpretation, drama, emotions, full of hot air. Reality is simple, a woman standing by the railing of a bridge… or maybe a balcony. No words, no emotions.

This is the job the Playground is about… to carefully peel away the veils (words and marker feelings = emotions) YOU add to reality to make you, ahem… miserable, for the most part.

The three umpires story needs to be told again here… 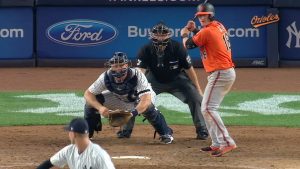 Baseball, an Americall ball game played with a bat, where a player, called the pitcher, throws the ball to another player on the opposing team, and the player with the bat needs to hit the ball in a particular way… There is also a catcher… who catches a ball that wasn’t hit.

The person who calls the hit is a dude called umpire. Umpires have a lot of influence on the game… as you see. But… but… but… there are three types of umpires. 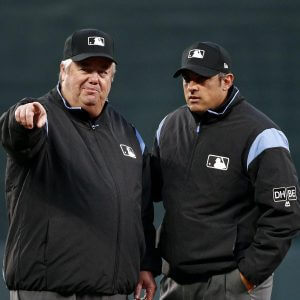 A radio reporter decided to ask one of each types of umpires how they call the ball.

And that is probably the most important principle about life, about happiness, success, health, anything in life.

Yet, 99% of humans live life according to what they see… but they don’t see things as they are, they see them as THEY are.

Now, I admit, that this is the hardest thing to change, because you have to turn fast enough to catch your shadow… and most people can’t, or won’t do it. 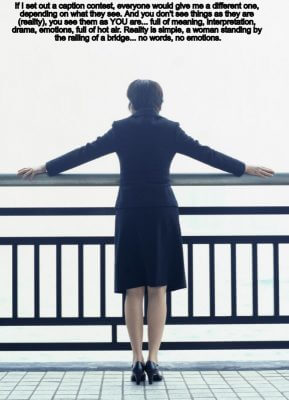 In the partner conversations, I got privy to a few issues that people deal with.

Which means, your interpretation wins out every time, and that is that.

You can see clearly that other people do that, but on yourself… you look and there is nothing to see.

What you cannot see is your attitude, your fixed way to be, most of the time the attitude of victimhood. The attitude that you would be good if all those things didn’t happen to you, those pesky details, those pesky people, that pesky government, or me… lol.

The questions you may want to ask yourself, if you have this issue: what is the “price” I need to pay, if in fact I give up that I am a victim? and the second question: What would I gain if I were suddenly free to be ANYTHING, free to do WHAT WORKS, and free to relate to life as it had no meaning other than what I give it?

Then compare the two, the price and the gain, and start experimenting with transacting this deal with yourself… Eventually you’ll see what you want to choose, and then choose that.

I bet there will be people who will choose to remain victims. And that is OK with me.

My favorite literary characters are like myself: they discount emotions, their own. And at the same time they take care of others emotions the best they can (in this regard they are better than me!)

My way of dealing with this situation is to catch my own resistance, and respond in two distinct way: 1. get that they, your conversation partner, see the world as they are, full of emotions, and have room for that. Don’t correct them! Don’t teach them! 2. in your own speaking keep on looking at what is in the reality circle that is relevant to the conversation.

Life is not a pissing contest, unless you like to be miserable.

So every conversation is not about winning or losing, dominating or avoiding domination. 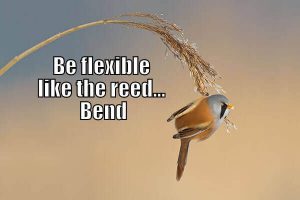 So when someone asks me about my arm that I broke back in September, my arm that hurts like hell and will never regain its full range of motion because of medical sloppiness, I tell them what is a fact about my arm: hurts, lack of range of motion, etc. Not how I feel about it, or not anything that is not a fact.

And they get from what I say what they wanted, without me having to go to the horizontal plane.

By the way, last night my wrist was hurting more than usual, and I had time to have a conversation with myself, if it was worth suing the hospital.

I did a thought experiment and went all the way to the rabbit hole. I saw that the result would be years spent in justification, and misery.

This last thing is also a variant of “don’t even look at the marshmallow” principle. Incredibly useful principle, it is saving my sanity in more ways than one.

Illustration to what degree reality as a collective hunch, here is an essay from the late Bill Harris on the same topic.

I learned the everything/nothing concept in Landmark Education, and for me it was airy fairy… It didn’t give me access to reality. I am a “dogsh*t” type of earth sign… I am not given much to Eastern mysticism, playing with words, religion, and other woowoo stuff…

But some people like it, so I’ll republish Bill’s essay here:

Why aren’t you happy most of the time? Bill Harris explains…

For thousands of years human beings have been asking, “Why are we here? What’s it all about?” Another way to frame this question would be to say, “What is reality?”

So let’s start with a very big picture look at one answer to this question.

Through the centuries, mystics have said that there is but one energy in the universe, that the universe and everything in it is the play, the dance, the unfolding of one energy, and that underneath the seeming multiplicity, everything is made of the same substance.

This energy, they would claim, is everywhere, and even “everywhen,” in the sense that it is eternally behind all the changing forms we see.

This idea of Oneness is sometimes referred to as Omnipresence, or God. The Hindus and Buddhists call this principle, Sat: one energy, everywhere, fundamental to everything, always, past, present, and future.

Quantum physicists say something very similar. They have noticed that on the sub-atomic level, particles come into being, seemingly out of nothing, and dissolve and disappear back into nothing.

These awakened human beings, however, go one step further. They also describe this one energy as being aware of itself, aware that it is everything, everywhere, and everywhen.

This energy, they say, is conscious. You could even say that it is consciousness. Hindus and Buddhists call this awareness Chit.

Chit is not what we typically think of as knowing, in a cognitive sense. This is not an intellectual knowing, but rather an experiential awareness, often without mental naming or commentary. It is an experience of being consciousness, not knowing about it.

This Oneness, then, this underlying unity, is aware of itself being everything.

If you were established in this awareness, having this experience—that there is nowhere to go, nothing to get, and nothing to fear—you would be happy, peaceful, even blissful.

The third characteristic of reality, then, according to those who describe it in this way, is called Ananda, which means bliss in the ancient Sanskrit language.

The mystical explanation of reality, then, is that reality is Satchitananda. One who is aware of being the one energy from which everything comes and into which everything returns, is blissfully happy and peaceful.

This energy, this Satchitananda, according to the mystical view, is who you really are.

Your fears and desires, your idea that you have to get somewhere, and your idea that you lack something, is, in this view, an illusion. You are not a separate ego in a bag of skin, estranged from the rest of the universe and subject to its whims, but, instead…

…you are the very universe itself.

Why, Then, Am I Miserable?

Inevitably, several questions arise:
° If this is true, why don’t I experience it?
° Why am I unhappy so much of the time?
° Why do I often feel so powerless?
° Why does it seem as if I am a separate creature in what certainly seems to be dangerous and perilous world?

To live, I need a constant supply of air, and without it I would die in just a few moments. I need food on a regular basis, or I die. The temperature must stay within a very narrow range or the chemical reactions that keep me alive can’t happen.

And then there are ultraviolet rays, and other dangerous electromagnetic forces, and poisons, and dangerous people who want to hurt me, or at least have an agenda that often hurts me, and if I get just a few miles away from the surface of the Earth, I can’t survive.

This is hardly a perspective of peace and bliss and knowing that I am the one energy of everything.

Awakened teachers have an answer for this: You aren’t happy and peaceful and in touch with the fact that you are all and everything, everywhere, eternally peaceful and blissful, because of your mind.

Your mind is in the way of your experience of who you really are.

Your mind (through what I have called your Internal Map of Reality) is creating a mental reality that acts, in a sense (to use a metaphor from Eastern philosophy), like dust covering a mirror…

…keeping you from seeing who you really are.

Realizing that the mind gets in the way and obscures what mystics would call your true nature, seekers have discovered methods for directly perceiving the reality they describe, without filtering it through the mind.

The most effective and most popular of these methods is meditation. Over time (unfortunately, often after many years of practice), meditation stills the mind. This decreases your identification with your mental map of who you are, your idea of who you are.

When this happens, you are able to experience reality directly, without filtering it through the mind.

As the mind becomes quieter and your identification with it decreases, you begin to see the spaces between what the mind creates…

…like parting the branches in a thicket to see snatches of the meadows and mountains beyond.

This essay was excerpted from Bill Harris’s Oneness Isn’t Metaphysical. To read more, download your free digital copy below. You will need to give your name and email address to the site… and receive on average one commercial email, unless you unsubscribe.

Here is the link: Don’t say I didn’t warn you! lol