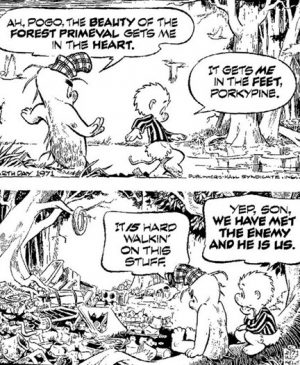 This is a long article, and a work in progress… I am still working out this whole issue: I guess it is my life’s work. So if occasionally I don’t make sense, cut me some slack, will you? If I jump around… please just know that eventually I’ll say what I need to say, and I’ll make sense.

The reason humanity (and your life) looks the way it looks is because you are a coward.

I am talking about humans’ delusional nature.

It takes courage to have a world view where you are responsible for what you do, who you be, what you get.


But, it seems, that even caring comes easier to a human, than being responsible.

And caring is open for only a tiny fragment of the population!

Even though responsible simply means seeing (and taking on) your role in the cause and effect continuum, seeing your role in what happens, the feelings, the attitude, the illnesses. And gain power from that.

When you take on being responsible for whatever you can see you caused, you immediately see how you can un-cause it… Personally.

It all began with natural catastrophes. The cunning delusional mind said: it is the gods. Other minds said: “it is punishment for greed and abuse of power… but not mine… I didn’t have greed and didn’t abuse my power: I had none.”

The ruling elite, as powerless in the face of catastrophes as yourself, declared themselves the saviors, created a go-between between you and the gods, and the process of organized duping of humans began in earnest.

With the creation of Christianity the job of creating a ruling elite seemed finished, and humanity, now completely severed from the inner divine and the All-of-It, the vibration of humans started to get lower and lower.

Theories of why and how, and who is the enemy, who to blame abound, but from where I am looking, the statement “We have met the enemy and he is us.”

In Christianity everything is called sin, and if you sinned you’ll go to hell… Simplistic? Hell yeah. To make it even more guilt-evoking, they declared that even your thought is a sin if it deals with anything pleasurable. Now, you are completely locked in. You dream, and you are condemned. Very convenient to the ruling elite: unhappy people that try to suppress their fundamental nature are fodder for the church, government, because guilt makes you a coward and weak.

So what do you do if being you is so bad, if all you think and do is a sin and you’ll burn in hell for it? You lie. You pretend.

But not just to others but to yourself. And thus developed the breeding ground for a humanity of blaming, superiority, victimhood, sheepdom, fear and looking outwards.

The deepest desire people have, as far as I can see, is to connect to themselves and to a higher paradigm. Being cut off from yourself and all-of-it is painful, no matter how successful or unsuccessful you are in your worldly endeavors.

But you can’t seem to be able to inward. Why? Because of all that religious indoctrination that made you a guilty person. Because of the Parental Disapproval Syndrome, that frowned upon you making the slightest mistake. Because you expecting people to love you the way you are, because you expect to have unconditional love… not understanding that mere mortals are always in survival and therefore unconditional love is a myth… but you feel guilty about that too.

Now, let us talk a little bit about the self-deception that is the other side of the coin, the mirror effect:

When you hide from yourself, your nature, your “sins”, your real self, you still need to see it somewhere: and you will see it in others.

You will go around judging other people for the exact same actions, feelings, attitudes, and thoughts you yourself suppress knowing about, or lie about.

You will find someone who is worse than you to feel better about yourself. You’ll even make us shit, like aliens, and Organic Portals, psychopaths in the midst of us, reptilian beings, to make yourself feel more human, less imperfect, more, and better than them. After all you are human, you say so yourself, and those, THOSE beings aren’t… they are feeding on your soul! They are the cause of all the troubles. They… conspiracy… 1

“But I am good” a woman who used to be my friend used to say. I answered her every time “But you are not!” so our friendship got ended by her.

You want to surround yourself with people who agree with the lies you tell, and help you blame, project, complain…

But the world is going out in a wastebasket, and things don’t go as they should, and… and… and…

So go and find your scapegoat, someone or something to blame.

I am in the middle of reading another of Laura Knight-Jadczyk’s books, trying to mine the 5% that is gold and have patience for the 95% that is not.

In digging for gold in Laura’s book I found something I wasn’t looking for, but I needed to find.

I wrote in another post that to fight evil, to be good, one must know evil intimately. Not because knowing evil will ever feel good, but because you need to know it, or you’ll mistake it for good.

In that book Laura states that there are two races that look exactly alike. Both look human, but one race, exactly half of all human looking creatures is pre-human, lacks soul and has no capacity for empathy. In addition to that lack, this half of all human-looking-creatures feed on the souls of the other half…

Of course Laura and her group belong to the “unfortunate half” that have souls and therefore they feel like fodder for the soul-sucking other half with which they interbred. It is also hinted that the good looking half of human-looking creatures is the non-human… That I find the funniest bid… lol.

According to Laura and her trusty ouji board, all Jews belong to the pre-human breed… even though they are not very good looking.

These non-human, pre-human, unfeeling, discompassionate 50% is to blame for all the ills of society, the ills of the planet.

I have been muscle-testing people’s vibration for about two-three years now. I connect to All-of-it or Source, I connect to the person whose vibration I want to measure. I muscle test if I am connected to either. Then I ask permission to measure their vibration. From time to time I get a no.

If the answer is yes, then I start with “Is their vibration above 200?” and depending on the answer, I start going up or down. When the muscle test first says No in that’s where the person’s vibration is.

I’ve measured hundreds of people’s vibration. When it’s low (which is only a degrees issue, because all the vibrations I have measured have been low) I sometimes take the time to feel why. The feeling I feel in them, through being a true empath, is often a clue to why their vibration is low.

Guilt, shame, greed, hate, holding their breath, tight shoulders, etc. are all clues. I know exactly how each Bach Flower Energy feels, and what it “means” so I glean a lot of information about the person and their dominant “misery” from that few-minute long visit.

The most troubling are the ones that have no feelings… I guess those are what Laura calls the psychopaths.

I have always been troubled by the fact that expecting the best from others is such a two-edged sword. Magical thinking can make you blind… negative thinking also makes you blind.

The only attitude that has worked for me is being awake, being aware, and be like a marshal arts warrior: be ready for anything.

Most of us live on the periphery of our being, identifying with either the body or with the mind. We are cut off from the inner sanctum of our being. The separation is not total, and the soul nudges at us, wants us to return home, which is inside. 2

We use the tools of the periphery for everything, and we can feel that we are somehow ineffective: it is as if we ate soup with a fork… we stay hungry, unfulfilled, dissatisfied.

Going inward to be a fully functioning human being, an adult, is scary. Although it is talked about everywhere as a good thing, in reality it is discouraged by the powers that be: only a hungry, unfulfilled, scared humanity will behave like sheep. Once you start to become effective at using the tools from the vertical dimension of being, the tools from within, you won’t be sheep, or scared, or unfulfilled. Guaranteed.

All the questions you have, what is my life about?, what’s my purpose?, what is my life’s work?, can only be answered by you, and from the inside. The outside will pull you in thousands of different directions, but a life suggested from the horizontal will be a borrowed life, lacking energy, lacking you.

With the DNA upgrade, new capacities, like caring, like compassion, like feeling another’s pain as their pain, being able to act while afraid, certainty, seeing the big picture, seeing things from a different vantage point, from your opponent’s vantage point, being able to stop for a moment and reflect if what you are saying is your truth or accepted without any thinking on your part…

You have these capacities, dormant, in your DNA.

Not thoughts, not visualizations, not dreams. By actions.

Even if you practice hours, days, months in your mind, in your imagination, unless you take the action in the real world, the action that activates the capacity, and then continue taking actions using that capacity, your capacity will be dormant, and you will be still only a half-baked human.

My main job is to invent new ways to get you into action. Invent new ways for you to get a transformational insight and then act on it. Or give you a homework that doesn’t make sense to your mind but will make you take actions that activate the capacities you need to become who you were meant to be.

Everyone has their cross to bear.

PS: I wrote this article when I didn’t know, yet, that DNA capacities need to be activated individually. Now I know. You can read all about it.

It’s not automatic, but now it’s possible. You need to learn to do it, to do it often, the triggers to be pulled down… so it’s a great idea to do a workshop instead of trying on your own.

Go to the article where I talk more about it, or just register here:

Get the recorded workshop plus the DNA activation session ($25.00 by itself)

Get your Detached Workshop and the capacity activation ($25 by itself)