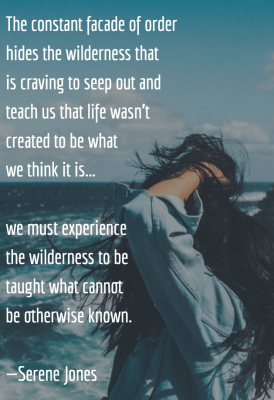 Confession: You can never get a cup of tea large enough or a book long enough to suit me

One of your most defining characteristics as a person is, whether you are an optimist or a pessimist.

But the common, and ordinary way to look at those attitudes is inane… 1 as in stupid and near-sighted.

Most words are defined with unreality as their focus… when you’ll start to see it, that is when your vocabulary start to hit the level where you can actually see some of reality, not just the “map” of reality. 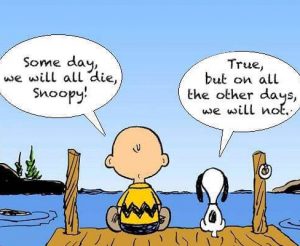 Positive thinking has been a plague that is destroying humanity… and so is this inane definition of what it means to be an optimist.

I offer another view that is firmly rooted in reality, through the observation of certain choices that tell more of the story. 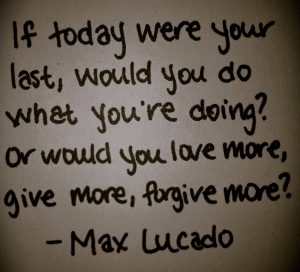 Optimist, if we want to make the inaneness visible, is someone who believes that the future will be better just because they believe it will be so. 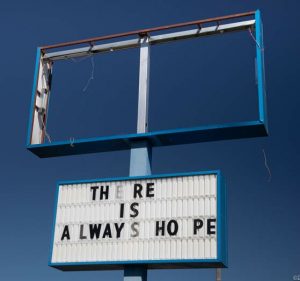 Half of my clients are optimists. They are the ones with the desire trap, they are the ones that are afraid to let go of the rang of the ladder to go to the next level… because their dreams are so juicy… they don’t want reality. They quit, if they feel forced to face reality. Reality is a bitch for an optimist… to hell with it! yeah… lol.

And then there is this group of “it’s not worth it” pessimists, these are the ones who work the hardest.

I have this “it’s not worth it”, or at least a version of it.
This is how it goes: I decided, early on, meaning in early childhood, that I was on borrowed time. I decided that I was not wanted and that I was going to have to die… or have to live in the street… somehow… and that has made making long term plans very difficult, occasionally impossible.

Consistent with this “I am going to be thrown out of the garden of Eden, so the only thing that has value is what is inside my head… what I can take with me… what no one can take away.

And I did lose everything, on average every ten years… and have started from zero.

I have even called myself the Phoenix… that burns periodically, only to rise more beautiful from the ashes. 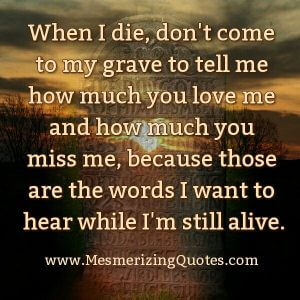 My hunch is that I am unconsciously following a script: I am at the 10-year burn it all phase… and my health has been (predictably) suffering: I am wondering how much of it is self-induced… The high and secret drama unfolds again… lol… not that funny, by the way. 2

I am now 71 years old… but this invisible dynamic has been a constant companion: who knows how long I’ll live…

Dynamic is an important word that has also been largely bastardized in the English language. Something that is dynamic means: there are forces… forces at work, and those forces cause, stimulates change or progress within a system or process.

I am an engineer, but in my learned profession, architecture, the forces are much less visible, than in mechanical engineering, where the forces move stuff in predictable ways. 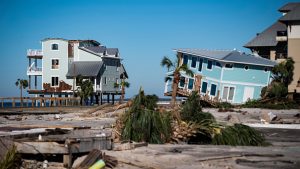 One part of the invisible, for most people, is this whole world of dynamics: an near impenetrable world of the unexplained… and your lack of curiosity, and your lack of squeamishness renders you, forever ignorant and stupid when it concerns anything that moves, pushes, pulls, jerks, pumps, fuels, shakes, levels, rocks, tears, cuts, or rotates, to just use a few of the words that unless you know they are dynamic words meaning something really specific regarding to forces, you have no idea what’s going on.

For you the world is still flat… 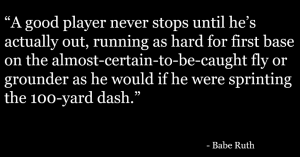 And yet, if you have enough desire to live the life where you can win, where you can experience your power, your magnificence, you’ll summon the courage and the brain power that is needed to comprehend, appreciate, recognize and use the hidden dynamics of human interactions, the hidden dynamics of the human “psyche”… that once known, it is like the sun came out in the dark forest and you don’t have to stumble over roots and branches any longer.

The whole world is teaching you the shadow-works of Plato’s Cave… my job is to teach you what casts the shadows. 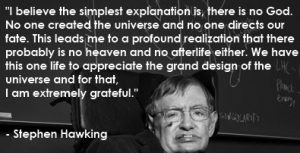 I remember my first Forum, (It wasn’t the Landmark Forum yet… back in 1987) this was one of the biggest issues that came up: that we, humans, live as if we lived forever, as if we never died… and yet we are always in a hurry. 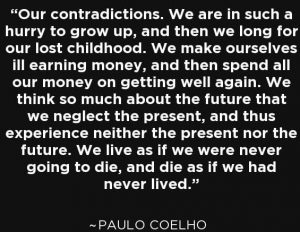 > “Our contradictions. We are in such a hurry to grow up, and then we long for our lost childhood. We make ourselves ill earning money, and then spend all our money on getting well again. We think so much about the future that we neglect the present, and thus experience neither the present nor the future. We live as if we were never going to die, and die as if we had never lived.”

And if you look, that is true for you. True whether you live on borrowed time, or whether you believe that the world will give you all you want, just because you want it. 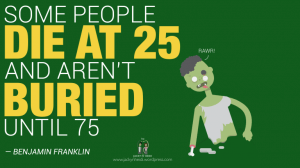 If you don’t want to waste your life… what has remained, you’ll need to learn a new way to relate to life, to reality, to what is going on.

Earnestly. Not to the shadows, but to what cast the shadows. Reality… including the dynamics.

You need to learn to value what matters, what is important, and de-value the stuff that is not real, that is someone’s fancy, even if it is a whole country that believes it, or a whole church two billion people strong.

You need to, finally, stand on your two feet, think with your own brain, and learn how reality is, how unreality is created by words, and how you can learn to live while you live… instead of being a puppet on a string, being jerked this way and that.

99.3% of all humanity sees the world through the shadows inside Plato’s Cave (the mind)…

The shadows are interpretations of reality… creating fear, anxiety, anger, frustration, and other emotional reactions.

All or most of the books and articles stay in the same world of shadows and interpretations… leaving you powerless, clueless, pontificating, and losing.

By coming out to where the sun shines… you learn to see reality as it is, dynamically…

Reality is something that you maneuver, adapt to, manipulate, shape to your own image… but you cannot do that from the cave.

All the manifesting teachings, law of attraction, most of making money teachings relate to you in the cave… and don’t teach you the parts that can only be taught to be seen and recognized from outside of the cave…

99.3% of humanity relates to the world through the shadows… not to what casts them.

I teach this in the Playground… It’s a program…

It is, although enjoyable, not for the wimpy and the sissy… It is probably not for you… 99.3% certain… lol.

You know who you are… or if not, the Starting Point Measurements will tell the truth about you…

And here is a little common knowledge bordering the invisible, maybe even overlapping a little:

What that quote does, is touch on, hint on the order in the wilderness that has been undiscovered by you…

That is what I teach… that order.