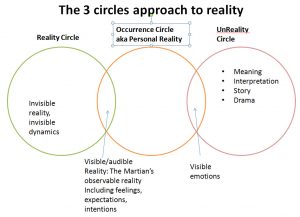 Things were falling apart on me. Both my computers misbehaved, and threatened me with a situation of no computer… not good, not good.

Two partner calls I listened to showed me that half of my students didn’t, don’t get what is supposed to be done in the Playground.

You can only imagine how it felt…

My home page, using the terminology from Transactional Analysis, is devastated… So I felt devastated… as if my life were destroyed.

I have a devastated/discouraged machine

This kept me in the game… I didn’t fall apart… I just kept on looking what caused both computers to misbehave all of a sudden… a gremlin in both computers? Weird. I found both this morning, by the way.

I wrote articles, I wrote emails, but from the response I saw that I am shooting blanks. I was puzzled.

Then on the Day of Power download webinar I had three of the five students who weren’t getting it and we had a conversation. And finally I got what I didn’t teach well, what didn’t go through, what has sounded to my students exactly as important or exactly as casual as the rest of the course.

So I am going to teach that part, the part that is 90% of the course, the part Landmark Forum gives only 30 minutes, even though it is the most important element of a life you live powerfully: telling reality apart from unreality.

And even though the entire Landmark Advanced Course deals with what is real, it never actually goes back to the basics, so graduates of the Advanced Course still don’t consider it, don’t do it, to the tune of 99%.

So here is what I haven’t been teaching effectively to 50% of my students:

You don’t see the world, things the way things are, you see them the way YOU are.

What does this mean? This means that you add your personal flavor, meaning, agenda, past grievances to what you see.

But because you can only be powerful if you interact, interface with how the world is… i.e. reality, 99.99% of the time you aren’t powerful, you cannot be powerful, because of all that “personal reality” stuff, the meanings, the agenda, the emotions. All words, even if they are largely unconscious. All words that color and distort reality, and make life hell on earth.

So in the circles part we dig out, separate out reality, and put it in the left circle, with regards to everything that we see. In the partner calls we largely deal with incidents that cause us grief… but you can do that with anything, like myself with the computer troubles, or student troubles… lol.

Why do we go to the left circle, the reality circle?

This is the crucial question. Why not just deal with the sexy, seductive invisible dynamics, that are, by the way, also in the reality circle… part of the yet invisible reality?

Because unless you start from reality, you’ll end up in unreality and in hell.

In reality there is nothing wrong

Yeah, in reality there is nothing EVER wrong. In reality things are as they are, blue, dead, wounded, talking, walking, sleeping… and none of it is wrong… so there is no need to fix anything.

But in the reality circle, the left circle, I can see what the computer is doing instead of what is expected, and there are no emotions. I can look, soberly, what it is that I have done recently that can cause the trouble, and one by one, undo what I did.

And lo and behold, that is exactly what I did, and found that an audio component I installed cause the rest of the computer to stop working. I uninstalled that part, and voilà the computer is working.

So what am I saying? did I practice the law of attraction? Manifestation? Not at all.

What I am saying is this: whatever is going on, if you can and do separate out reality, what even an unemotional Martian can see of hear, your power can increase as much as 99%… because you leave the meaning where it belongs: the right circle.

But in the left circle you can be 100% responsible, maybe even 100% accountable for what is happening.

And responsibility is your access to your personal power to do what you need to do to have a great life.
You can look at Hillel’s little poem that asks the questions you can’t answer in the right circle:

And use it to advise yourself.

In the left circle you can see clearly what it is that you are not providing for yourself, even though you could.
You can see what stands in the way to provide it… and do it now.
And you can take responsibility for your about-me score that wants everything for yourself and nothing for others, your attitude towards the world.

They are just what they are.

Why? Because we don’t drag the good and the bad and the evil, all fruits from the poisonous tree of the Tree of Knowledge that destroyed humanity… and keep destroying it, mercilessly.

In the left circle there are no having to, needing to, wanting to and should either.

Those belong also to the right circle.

Instead in the left circle you can see what would work. What is needed. What could be there, what you could do, so life works powerfully for you.

In the left circle you are also not wrong. You can let go of your tendency to avoid domination: there is no domination there, unless you say so, and the moment you say so, guess where you are: in the right circle.

Domination doesn’t exist without words… it is not part of reality. Just like freedom, and dignity, and smart and stupid, and confused, and clumsy, and meek, and the rest of the words you habitually use: they all belong to the right circle.

What makes you angry, uncomfortable, meek, etc. is all in the right circle, not in reality.

Even love is in the right circle. There is no love in reality. There is behavior that looks smooth and productive to the Martian, but not love. Not kindness. Not niceness.

The Martian can see that you tighten up, that you react to something, but the Martian doesn’t see it as wrong, neither sees it as justified… it just sees it as it is, tightening up, or reacting, and there is nothing wrong with that.

I remember when I first experienced the Martian’s view (I could tell you that it is the same as the Witness view, but I don’t think it would make sense to you).

Between the zip line course and the vertical rappel my group had to wait for the previous group to finish the exercise. So we sat down, and were instructed to close our eyes and think of nothing.

I did what I always do: what I wanted to do. So I decided to go back to one of the defining incidents of my life, when I was six years old, or maybe five, and my father made me perform oral sex on him.

I normally remembered that incident as myself, but this time I looked at it as a third person, the sounds turned off… And I saw what I saw, and it was funny. Much like a silent film where they throw the cream cakes into each other’s face… funny.

And what I got is this: looking at anything from a sideways view, the Martian’s frees me from the suffering, the interpretation, the drama.

I tested it: after seeing it from the side, I went back to how it felt to the little girl, and the drama was gone from there too. There were feelings, but they were words… not the drama. Not the “horrible” thing that happened to me.

Later, over the years, I went over all the hurts and “bad” things that happened to me, and took them through the circles… and today I am sober, I am effective, and I am happy.

And when new things happen, which are rare, then I immediately take them to the circles, and in a few minutes I am free, back to being a person instead of the wretch I was heading towards.

I am present, I am curious, I am alert, alive, and I have fun. Fun was not even in my vocabulary until I brought most the incidents into the left circle. But today I have fun, and maybe I can even say: I am fun.

Most people like me. Which is nice… It used to be the opposite: most people didn’t like me… lol.

So this is what the circles do.

And in the Playground you have a chance to bring all the current incidents to the partner calls, and run them through the circles, and the invisible dynamics that reach back to the past incidents, and clean them up. Bring sanity, sobriety, clear eyes, fun and happiness back to your life… where nothing is wrong, and nothing needs to be fixed.

Warning: If you only do the invisible dynamics and don’t bring everything to the left circle, you may indulge in telling the story, but you remain wretched.

Or, alternatively you distinguish all that isn’t real: you didn’t take the incident to the left circle where there is nothing wrong…

The circles is the magic wand that fulfills on the promise of the course: Playground: it is never too late to have a happy childhood.

Hell yeah… a happy childhood and a happy life. That is something, isn’t it?

PS: I just noticed that I didn’t say why yesterday was one of the best days of my life… In the conversation with my students I discovered that I didn’t make sure they got that the goal is to live life in the left circle where there is nothing wrong.

Now that I know, I can make sure I do make sure… whatever it takes.

When you take responsibility for what you did or didn’t do, you can correct it.

So yesterday put me back to power… and that makes yesterday the best day.