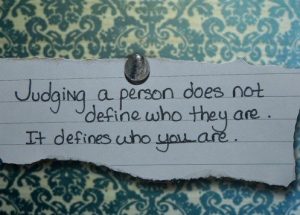 But it’s so “normal” to be a small thinker, that many people think they are big thinkers because they have big pie-in-the-sky desires.

What is a pie-in-the-sky desire? It is an end goal to which there is no ladder and there is no intention to build one.

The easiest “test” to find out is to ask them to do the skill-finder process from the book “What Color is Your ParachutE” that has been published, I guess, for 50 years? OK… I just checked, for 49 years.

That means you can find used copies of the book: that section hasn’t changed much… maybe a little with the introduction of computers.

How does the skill test go?

In any project your actions belie the underlying skills, the ability to do something. Flip a pancake, change a diaper, dig a hole in the garden, convince a cop to not give you a ticket, hold your tongue until it is time to speak, accept support, speak when afraid, listen well, prepare a meal plan, follow a recipe to a T, make the same recipe with a different ingredient and make it still good.

There are thousands of skills. Each need to be learned to be able to use them successfully.

The skill finding process asks you to write up seven incidents/stories/projects where you used skills, the project was successful, and you enjoyed the process, not just the result.

The words that communicate a skill are “what YOU DID”, and HOW you did what you did. So when you attend a class, for example, what they taught isn’t telling anyone what you did, only saying what YOU did will do that.

By age 18 I could have written 40 of those stories… but most of my clients can’t come up with more than three.

Why is this a good test?

How do you add to your skill set, you ask? I’ll tell you.

Create projects, and take them to completion.

I have an average 3-4 projects going on at any one time.

Get a new computer, set it up, transfer the old stuff on it, repair the computer desk, clean up under it, discard the old computer responsibly… that is one project, not six…

A project can be fast… or it can take work over months.

Skills like muscles, they atrophy if you don’t work with them.

Two students are currently working on acquiring the skill of gratitude. That learning will take some wild twists and turns, because they don’t know what they are really learning…

I have a student whose project should be to increase his inspired level. When you are inspired, inspiration advises you, instead of your friends on facebook.

In the What’s Missing workshop we come up and agree on a skill/ability/attitude that you don’t have… but if you did, your life would become sunshiny… because of it.

Learning to be that, to have that skill often needs another skill: seeing the opportunity. Turning around on a dime. Letting go. Looking again to see if you saw reality when you first looked. It depends on your inner architecture what other skill you need before you can even dabble in the skill we invented.

Why? Because my programs are training you to become all you can become. And you cannot become… with small thinking.

And nobody can do it for you. YOU need to do the growing, the projects, the experimentation, tirelessly, consistently, or it won’t happen.

People who are afraid that I’ll kick them out know this about themselves. But instead of facing that fear and start growing, they keep doing the same things, small things, being afraid.

They have another thing in common: they blame, instead of own what makes them small thinking.

So you see, often the world view is at fault for being a small thinker, and owning what owns you is the first skill to learn… that unless you do, nothing else is coming… no ladder is built.

You remain on earth and the pie in the sky stays out of reach.

So what is there to do? you ask.

You should find out really where you are at… “spiritually”, most of it is mindset, and physically.

It’s a snapshot of where you are at, who you are, and where to grow yourself.

And then, when you are done with that, maybe you’ll be accepted to attend the What’s Missing workshop. It takes skills, by the way, to be at the workshop, and be set up correctly, so I can work with you.

If your skill level is too low, and I see examples for that, then you are not ready for the workshop.

OK, here is the link to get your Starting Point…

Get your combined health and spiritual measurements
and once you are done, I’ll give you the link to the What’s Missing Workshop.

There is one scheduled this coming Saturday, so if you want to come to that, make sure you get your Starting Point Measurements.