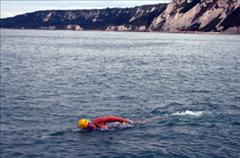 In Part 1 I introduced the issue: You want something, you have a little bit of success, you share it with people, and all the success disappears.

I have done a seminar, called “Money, from concern to freedom” three times, maybe more. Every session there is a homework, and at the beginning of each session people stand up to share. They share all the unexpected money that came to their life in the previous week.

But when you tally up where people started, and where they are at session 10, the numbers don’t lie: people don’t make more money, and that is what happened. All that sharing, no lasting results.

In part 1 of this article I talked about the Israelites, and that jumping into the water opened the support from above.

This second part is to answer why the support seems to stop, seems to jinx you when you share your successes… Here it goes…

My friend called me last night. He told me that he invented himself to be passionate. “Why passionate?” I asked…

I am not fond of passionate, but that is my problem, not his. “What issue are you dealing with that in your desperation you turned to a weapon like being passionate?” I asked 3

“The issue,” he said, “is that I am blah at work. I am just going through the motion.” “Now, that is something I can sink my teeth into.” I said “I am going full out in bed. I am also excited when I get to my seminar. But everywhere else, I am blah, I am just getting by.” He continued.

So I suggested that he takes on putting himself on the hook. Inventing that the only way to be in that part of life, work, driving, anything, is to be on, to be perky, to be 100%, or there will be consequences. That is what I call “being on the hook,” by the way.

It is a wonderful way of being, when every moment counts, your actions count, your life count. Living any other way is not worth living, though most people live that way all of the time. 4

The next thing that happened: this morning he called to tell me that he gave a ride to someone who didn’t look like someone he should give a ride to… but he did it anyway.

And he expected me to celebrate his success, after all that sounded very alive to him.

When you truly engaged and have thrown yourself into the water, you don’t stop in the middle to celebrate, you swim! You swim, you see it to the end.

When you only pretended to do something, when you just prayed, when you thought about it… then you have all these “successes” to share with people.

So, surprise, the original question was wrong (this is what you get when you mix with Higher Authority, lol, you find out that even your questions are wrong! lol.) The correct question would be: When someone is up to something and right from the start he seems to have great results to share… how come that the big results don’t come?

Now, stop pretending, stop praying, stop bragging, and, if you want what you claim you want, jump! That is the only way to get what you want.

1 thought on “Are You Jinxing Your Success? Part 2”