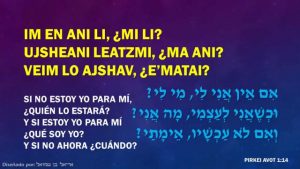 So you want to be important… liked… relevant… belonging.

This issue is coming to the forefront… This expectation of be made important, liked, relevant, belonging by other people, or by some job, of by association, or by some success.

Or to be liked by behaving in a certain way, be liked by other people because of something you do or don’t do.

It is an aspect of being an effect… not a cause. Little explored by anyone.

I feel important because… I feel liked because…

This what Hillel the elder said:

But how do you do it? How do you provide yourself with what you need?

Yesterday in a one-on-one call I demonstrated it to my student who badly needed it: she is having a presentation this morning, and she would like to be liked by the top brass who will be there.

But have you noticed that when you want to be liked you behave weird? How your weird differs from others, but it is weird nevertheless.

Her weird is to be stiff, rigid, both her posture, her sentences, and her voice. Totally counter-productive. 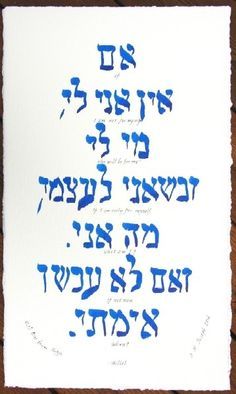 My recommendation was that she spends some time giving herself the liking, the love, that she always hopes to get from others, like from her mother when she was little.

It’s a technique, and it works only temporarily… the unsatisfied craving (the ITCH) is what triggers the racket, the main machine that is running our lives, running our behavior to never get what we truly want.

But if you make the technique a practice, like I have, then the incidents will be few and far between.

I once knew an introduction leader who sold 80% of the room repeatedly, predictably, without any effort. Her technique was: before she lead a sales event she sold herself first on the idea that of course they’ll register… and they did.

That of course caused her to not effort, to not be pushy, worried, to not be needy.

Needy is the enemy of any influence you’ll ever have on others, on your work, on anything.

I have noticed that when I am not that ‘of course‘ I get all afraid, I get all needy… and I may even blow what normally is of course like getting support, or a ride from the person whose job is to provide rides.

I resort to begging…

Same is with importance, relevance, being someone who is listened to, respected, validated, paid attention to…

My hunch is that your NEED is the source and the trigger of your racket, and once you identify it, own it, and see that you can fulfill your need, and you fulfill it, the racket will not have a trigger.

A racket is a machine move that lands you in misery. So you don’t want it… you shouldn’t want it, unless the payoffs are more important to you than getting what you want. Or alternatively, unless the payoffs are the only way for you to get significance, attention, notoriety, importance, by making others wrong, dominating, winning at all cost, etc.

If that is you, I want to bring to your attention that this kind of victory over others comes with a high ticket price: love, money, health are all sacrificed on the altar of desire to receive for the self alone: The second sentence of Hillel the elder.

Certain soul corrections engage in this high cost way of getting what they want, at the expense of others, and the expense of everything that is dear to them. 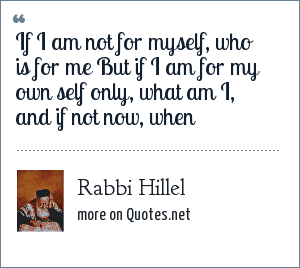 As you can see, Hillel was a smart dude… some 2100 years ago. You cannot go wrong with heeding his advice.

Oh, I promised to share how I provide myself with what I need.

Who I was at the time is needy. I needed a job to pay my rent, to buy food, I was desperate.

I invented for myself a new identity: I am brilliant and I am a contribution.

I had heard of declaration before, but I didn’t quite know how to declare.

Declaration is a way of speaking where you know that what you are saying isn’t true at the moment, but becomes true, as a possibility, the moment you say it, the moment you declare it, because WHO YOU ARE is a commitment to make it true.

This is the complete opposite of affirmations. The language is similar, but the attitude, the context is very different.

When you hear yourself affirm something that isn’t true, you know you are lying, and your mind also knows it… You are lying. You consider truth and falsehood independent from your will, effort, etc. Affirmations erode your self-respect, because what was a lie remains a lie.

But in a declaration you are not blowing smoke up your own arse… you know what you are declaring isn’t already so. You know it depends on you, your actions, your attitude, your effort… and you are willing to put all that into making what you declare so.

If any of what you are declaring is up to fate, other people, the weather, or luck, then it is not a declaration, it is an affirmation. So beware: don’t declare anything that is not up to you. 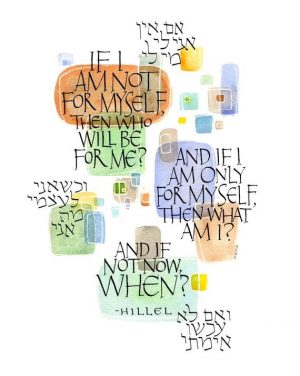 Had I declared that I’d get the job, or that they’d like me, or anything not up to me, I would have been a liar.

And yet, it took me all night to get the right tone of voice, the right attitude, but in the end I succeeded. I became that. So much so that suddenly everyone knew who I was: and when people talked about me they never failed to mention that I was brilliant, and a contribution, even though I never shared my declaration with anyone.

2. A whole decade earlier I was depressed and lacked self-confidence. A doctor offered to hypnotize me. I don’t know if the hypnosis worked, or I just didn’t want to let the doctor down, but starting the next morning, the depression lifted and I was able to do the things I had found impossible before, namely do presentations of projects to clients. I was an architect at the time.

So from these two examples you can see that it is possible to give yourself what you need to do to get the results you want to produce, to become independent and not needy of others… to become a cause, instead of a because person, an effect.

Want to feel loved? Love yourself.

I still, occasionally, hug myself heartily and whisper to myself: I love you.

Want to feel important? You can give yourself what an important person would give themselves… Notice that all those needs come with an unconscious opposite, an unconscious behavior to prove the world wrong for not giving it to you.

You want it, but you sabotage what you want…

That is the racket.

Where can you learn this?

You can buy my 53 invisibles course, but with that you’ll be pretty much on your own: it’s a recorded course.

You can add email coaching to it, but only people who are intelligent enough to have questions will succeed with that.

Your best bet would be to sign up to the Playground… In the Playground we learn these distinctions, and you have plenty of time to practice recognizing it with a partner.

I have to tell you, so you don’t expect fast results: it takes at least a year with 52 weekly partner calls with an audio feedback from me, and 12 classes, to even get to the place where you start to get clear.

But if and when you do, life can be smooth, or smoother sailing from that point on. With a whole lot more joy, love, happiness, and success than you ever thought possible for yourself.

I don’t accept everyone into the Playground. So I screen people. How do I do that?

Let me know, in the comments section, if you want to be tested by any of the options I listed.

The Playground’s promise is to take you to the Promised Land… where you become a Human Being… instead of a homo sapiens, plagued by the nastiness that governs our world now. Where dissatisfaction, frustration, depression are the rule, not the exceptions.

5 thoughts on “So you want to be important… liked… relevant… belonging.”