How Self-Awareness is the Key to Happiness, Effectiveness, Intelligent Decisions… The Sideways View 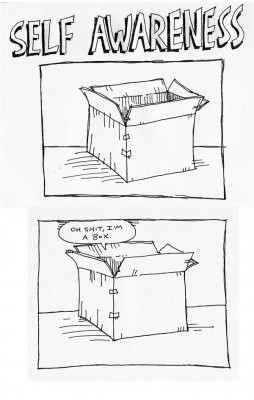 I thought I was going to have a domestic day, you know laundry, dishes, stuff… and watch myself, my emotions, and have a good old time.

The weather is gorgeous. My neighborhood is even prettier in the fall than in the summer: you can see far and the contrast of the blue sky and the rusty color of the leaves is really beautiful.

The thought: ‘I could actually be happy‘ cured and hung in there for a few minutes. I made myself a nice cup of tea, and checked my email.

There was a note there from Youtube that I have a comment on my ‘Why are Jews smart?‘ video, so I went to check it out.

I found hundreds of comments. All talking vile, adolescent hate talk, Jew-haters, dumb comments, irrelevant, about how Jewish women are good at oral sex… and that’s what I should do to them: I leave it to your imagination what specifically.

Now, I had some emotions to observe. Despair, the desire to get off this world and leave it to exterminate itself, grief, shame, hurt pride, hate back, contempt, a whole colorful and interesting cavalcade of feelings, none pleasant.

And then there were the thoughts to watch, the muscles to contract, resistance, anger, gulping, jaws tightening, face slackening… very interesting.

The tea still tasted heavenly, the sky still blue, the leaves still rusty, and the birds still happily chirping: the weather hasn’t been this nice in weeks.

Other species just are, always in the middle of the drama of life, but humans can locate their selves not in the midst, not in the hubbub, that is why they have survived… but just barely.

Having a capacity doesn’t mean having the habit of practicing it.

Having the sideway glance, the point of view, the vantage point outside of the cacophony of feelings, thoughts, and emotions, is a skill you are equipped to learn, and you are advised to make your number one priority to start practicing.

Why? Because unless you are apart, unless you look from the outside, you are part of the sheep: your emotions and your thoughts are determined and manipulated by the masses, the media, the family… everyone but you.

I used to be like you: everything happened to me, everything meant something about me, and I spent my years in reaction, in depression, in despair.

Just look at yourself, watching a movie, or television, and you so identify with the characters, the story, that you get all bent out of shape, angry, or weepy, or depressed.

How do I know it? Because I have observed myself doing that. That was the last thing I expected: allowing some fictional character jerk me around at the will of the writer… ridiculous. But it is how you are, this is how you are in your life as well.

Jerked around, your feelings, your actions, your whole being: not yours.

It’s fun to live vicariously through others, in a movie, in a TV show… but it’s exhausting!

It is much less fun to live in your life if you are in the middle of it: it is boring, it is nerve racking, or it is horrible… depending on your circumstances, but consider that it is neither. Consider that for the real self, the observer, it is neither.

The observer can watch it like it is a soap opera, and not get involved. With emotions your intelligence gets lowered: clear head is synonymous with no emotions.

And to make clear, intelligent decisions you need a clear head.

I watch people be reactive and stupid. I know they are not stupid, but they are reacting to emotions, and that makes you really stupid.

Learn to create the sideways view, the vantage point of the observer, and you will become intelligent: as intelligent as you can be. You won’t get smarter, sorry, that takes work, that takes sharpening your intellectual faculties, but you will be at least as smart as you are when you are not being stupid. And that is a big difference.

You see, those people commenting on my ‘Smart’ video wrote those comments, those people live jerked around by their hatred. They are inefficient, dumb, lazy, stupid, lame, and unsuccessful in their lives, which makes them feel strong emotions. They don’t know what to do… so they find the easiest way out: blame it on someone else: the Jews.

I could have compassion for them, but compassion without showing the way out their misery is wasted, is just a feeling.

I don’t think those people read my blog posts, they are too simpleton to comprehend, but you, my dear reader, if you can comprehend, you now know what to do so you can alter your life dramatically by withdrawing your self from the drama.

I teach techniques, I give homework for individual practice. I don’t know if I could teach a course that would make YOU more effective: some things can’t be learned by getting information, only through doing it.

Try to play the violin after reading a book, or watching a lecture on a video. You need to feel the strings under your fingertips, need someone to adjust the angle of your wrist… Getting a sideways view is like that… like learning the violin.

I may create a little course, I am not sure yet, maybe a webinar, but in the meantime, the only place I can teach you is my coaching calls… they are frequent enough to be considered practicing.