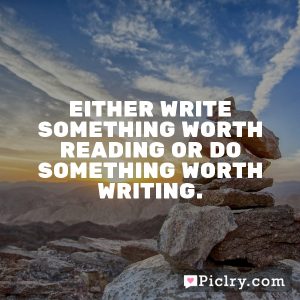 Actually, the original Ben Franklin quote is: Either write something worth reading or do something worth writing (about). Leave the world a better place than it was before you were born, because of your actions.

I didn’t think it was in me… so I settled for something small. I decided to plant a tree every year… there are too few trees in my humble but accurate opinion.

Then my landlord cut them, not all but most… and I got disheartened.

Luckily this happened around the time when I discovered that I have a unique talent in coaching: I can feel what you feel, and that is very useful: you can’t fake me, sweet talk me, etc.

So I redirected my energies to make a difference, to do something worth writing about, to my coaching and teaching.

Same principle, only the size of the action is different. 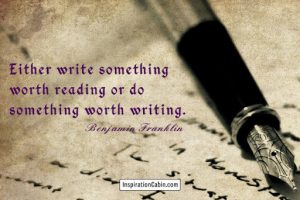 We would still have our eyes on the front of our heads, like predators do, but instead of preying on the other, on our fellow humans, we use our eyes to look forward and create a life worth writing about, do something worth doing… instead of what we are doing… which is, for the most part, for most people, is neither.

I have embarked on a series after reading the first brilliant volume… and bamm, the second book is horrible.

And the rest of the series got 10 times less readers than the first book did: what a waste. Source says the series is good. Worth reading.

In the second, he gets impatient, confused, distracted, and just does things… things that make no sense to do. He becomes a true predator… not someone who uses his eyes to look forward and create a life worth writing about, but for preying. 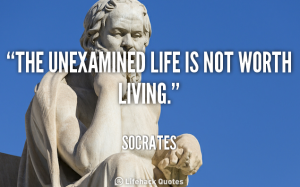 Worthless, in the extrinsic value domain means: produce something worthwhile. Leave the planet better off because you lived.

But for that you need to have forward looking eyes that look into the future, instead of at the other person who is wrong, and stupid, and in your way… like you look at them now.

One of my students considers himself my equal, maybe even my superior. He takes it on himself to advise me on how to live my life. All to cover up that he himself lives a worthless life in a worthless way. 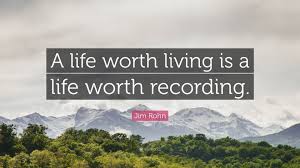 That is what HE uses his life for: predatory purposes. Preying.

We all come from predatory animals. According to my muscle testing, the maximum number of genes that are predatory is 10.

People with 10 predatory genes can’t help themselves but spend most of their energies on competing, comparing, and on other wasteful activities…

So Source has been, through me requesting it, adjusts people’s predatory genes down to 3… I get paid for it.

But bad habits die last… this dude, even with his predatory genes adjusted, is still doing the comparing thing… Why? Because it is easier to do than to actually start living a life that produces. Making choices where you gain your power from your actions, not over other people.

I have two students like that… and a third who is halfway out of that mode.

They play the ‘powerless’ card… as an excuse.

Power is the speed at which you make something happen…

Their lives are like that second volume of that series… Not worth writing about. Worthless.

Until and unless you use your predatory genes to conquer yourself and conquer a topic, a business, an idea, you are jerked by those same predatory genes, like a dog is wagged by its tail.

This Saturday I am running a course/workshop to see what is making you this dog wagged by its tail, specifically, you, and to see how to eliminate that one thing.

No refunds on workshops and courses… all sales are final. If you can’t show up, you can get the recordings…