I have been having problems with my right leg. The pain, the frequent inability to walk, stand, or even to rest was extolling a price.

Life occurred to me this way: it would be perfect if only my leg healed.

Chiropractors didn’t have any answers.

Then I saw a Youtube video about upper cervical adjustment. It was about a procedure that is directed at a 2 ounce tiny bone at the base of your skull that is frequently out of alignment. Birth trauma, whiplash, fall, your mother slapping you hard you always from the same side of your face. 2

My father had it, my brothers have it, and I have it.

When I looked in the mirror, I saw that my head is slightly tilted.

This is it, I thought. But… I KNEW it was going to cost more than what I had. I KNEW I could not afford it.

My leg didn’t get better. But one morning I woke up and looked at the same video, googled the method, found a chiropractor 140 miles from me, called and yesterday I got my adjustment.

Did it work? It is too early to say. My head is straight. My leg hurts a lot less. But whether all the symptoms were from this tiny bone being out of whack… we’ll see. I think so, but I don’t know.

You see, before the frequent connections that replenished my empty reservoirs historically. Historically means that all my previous incarnations, and all my ancestors as in bloodline.

And the incarnations… the soul on those stages.

What I see here is that all of your misery is perpetuated by you.

The solution to this issue has existed for a long time. The chiropractor I saw has been using it since 1989. 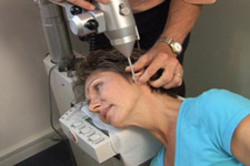 I have known about it for about a year now. I even heard about a guy who went from cripple to being able to see patients again. Now, the story came without the interpretation I give you now. But I saw that he was a cripple, about to lose his family’s home, and suddenly he was practicing chiropractic and starting to earn money.

But I wasn’t ready. I could not see that I could have that. That it was affordable (never called!) and that I could go for it.

I was locked in to the circumstances that seemed set.

Really? I hear the same thing from people that get the hang of connecting.

But as you see, both have a trick to it. Why? beats me.

One thing I can tell you: there is an eerie similarity between chiropractors and spiritual teachers.

They are both protecting of their turf. The chiropractors I go to regularly both knew that sick chiropractor, they knew that after that procedure he started to practice as if he had never been sick (he was deadly ill for 10 years!) and even to my persistent questioning they weren’t willing to admit that there was something in the world of bones they could not do.

Like the spiritual teachers I have examined claim that there is nothing in the world of connecting that they don’t know.

But all these doctors, chiropractors, healers are not doing that. They don’t know how, and they don’t want to find out. Because if they did, they would not be the only game in town?

Because they live in a scarcity mindset?

Because they are threatened?

The world is designed to be abundant. When you need more, more will unfold from the invisible world.

And even if this procedure really healed my leg problems, I will still go to a regular chiropractor! For maintenance. Because Life has a way of beating up on you! You sit wrong, or you eat the wrong stuff, or you walk to far, or you lift something too heavy… I may not need my Atlas adjusted, but I need everything else a regular chiropractor can offer. 3

Though I connect to Source regularly, I will still want to learn breathing that calms me. Processes to get to issues that hold me back. Learn a great visualization meditation. Learn to command strong energies…

You see that scarcity mindset and the desire to receive for the self alone is there, in every hidden nook and cranny.

And there is no way to ferret it out and let it go without gaining energy for it from Source.

It takes a lot of energy, a lot!

And what could a spiritual teacher do if they didn’t feel protective of their turf? They could say: let me check out that Tangerine Method of connecting to Source! And experience the connection, and experience the power. And add two sentences to their own process: “OK, look up and look backwards, and put your attention on your tangerine spot… ok… you are connected,” and then continue like before.

And suddenly they would be REALLY agents of the Light. They would stop being fakes and frauds and cheats.

And people who like them would continue to like them and, gasp!, they would get the REAL results from their programs, not just the placebo, feel good parts.

3 thoughts on “What Does Your Atlas Have To Do With Ascension? With Spirituality? With Connecting To Source?”