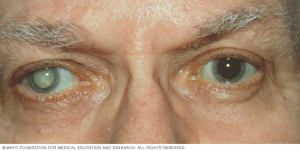 In this article I’ll explain how the high about-me score (low humility) works, and how it manifests in real life… like a spiritual cataract: prejudice on the basis of race, gender, nationality, social status, sexual orientation, or religious affiliation… and what concern me most: against Jews. Not pretty. Sign of a spiritual cataract and low intelligence.

The other day I started to watch a Hungarian Holocaust movie… Son of Saul, and managed to watch a whole 23 minutes in six or seven little ‘installments’.

Very graphic, the most graphic movie I have ever attempted to watch. 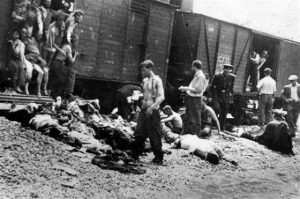 What he was assigned to do, with other Sondercommandos, was to herd the prisoners just arrived on cattle trains to the camp, straight to the ‘showers’ where they were told that they were going to take a shower, were warned to remember where they left their clothes, and other b.s.

The showers were the gas chambers. After the new prisoners were all herded, naked into the showers, the doors were locked, and the murder gas was opened. A minute of screaming and yelling then silence. The people locked in, were all dead.

Then the valuables collected from the clothes, paperwork burned, and the naked bodies dragged into the crematorium via an elevator, and the floors scrubbed clear of the dead…

One time a young boy, around 13 was found gasping for air, in the heap of all the dead.

Our hero, Saul, decided that he would give this boy a proper Jewish burial… and supposedly that is what the rest of the movie is about: I don’t know if I can watch it or not.

So, this morning, I am sitting here pondering why he would want to do that: give a proper sendoff to the boy, who, I forgot to say, was killed by a Nazi, manually, so he finally joined the dead.

Yesterday I shared with my downstreet friend that I can see antisemitism rise, and I may have to leave the country if I want to live and work.

I have seen that in my long life, and I don’t want to see it again.

Her response surprised me. She said: if they dare to come to my house, I’ll kill them. To HER house…

She is not Jewish.

She said: I am a good person… but I am going to kill them.

All the millions of people who stand by while other people, different color or different persuasion or different religion are killed, annihilated, I am sure, all think and have thought through millennia that they were good people.

This dude, Saul, in the movie, had to do the dirty work of the Nazis, and he did. But, I say (this is my personal opinion, I haven’t even seen the whole movie) wanted to save his soul by doing what he thought he could: give one other person the kavod… the dignity of being put to rest as an individual. As a person.

I don’t expect anyone to come to my rescue when they come for me.

Humanity has been trained for a long time to

The actor who played the role of Saul in the movie says: real hunger, starving, is when you start to look at other people as food. Shocking statement, but if you look around, the people who entice others, for example, to storm the Capitol, (and it is just a visible part of the horror that is going on,) those people are enticing a sense of starvation, where the other person shows up, looks like food. Fodder.

Homo Sapiens don’t care. Can’t. Caring gets activated in the DNA at 540 vibration… Just above love.

In the Third Phase activators, I recall, nothing really worked until the participants managed to activate humility.

Humility is the reverse of the about-me, the self-concern, that acts like a spiritual cataract, a cloudy or opaque area of your eye lens, so you can’t see through it, so you fill it with your imagination. 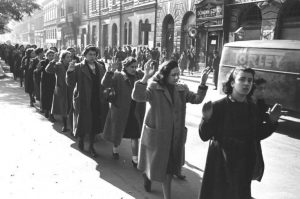 I understand, being blind and not seeing is ultimately a way to maintain POSITIVITY, which is dancing on the dead bodies and the graves of others, rejoicing that this time it wasn’t you who was killed.

…they came first for the Communists,
and I didn’t speak up
because I wasn’t a Communist.

Then they came for the Jews,
and I didn’t speak up
because I wasn’t a Jew.

Then they came for the Catholics,
and I didn’t speak up
because I was a Protestant.

Then they came for me,
and by that time no one was left
to speak up for me.”

History is repeating itself. It sneaks up on you, slowly, and ‘innocently’ so you don’t catch it, maybe even can’t catch it.

I was nine years old when the 1956 uprising, or whatever you want to call it happened in Hungary.

The instigators stormed the jails and let out the prisoners. Armed them. Then they stormed the Hungarian Radio building. And shortly after that they started to kill people. Jews, of course.

They stopped men and boys in the street and pulled their pants down. If they were circumcised they hung them, alive still, from lampposts from their feet… They didn’t live long enough.

Seeing those pictures in the dusty attics of our house later the next summer was a defining moment in my life. My brothers weren’t as inquisitive as I was. Seeing those pictures made me really a Jew. Made me start putting out like a Jew. There was no way I was going to be less than a Jew.

Why do so many people hate Jews? My opinion…

Later I realized that one of the reasons people hate Jews and believe all the things they, the inciters say about them, say about us, is because Jews are harder working, more educated, more thinking, more discerning, because that is the culture… the culture of Jews.

Jewish children are encouraged to think, to have their own take on things, read and discuss… It’s not the genes, it is the habits that create who you are.

Both my parents were Holocaust survivors, consequently none of the three children got Biblical names, and neither of my brother is circumcised… We didn’t eat kosher, we didn’t light Shabbat candles, we didn’t observe anything.

And yet we were Jews through and through. Reading, discussing, learning. Languages. Music. Professions.

But being hated is not pleasant.

Even if you are not a Jew, if you try to be smarter than others, you’ll be hated… because people want to be left alone in their ignorance, in their non-thinking bliss, and you are bothering them…

OK, back to what the Humility capacity awakened can do for you:

I get it. But please know: consciousness sees. The spirit suffers in you… the soul makes you miserable until you become all you can become… that is the job of the soul.

So if you are comfortable but miserable, now you know why.

I fully expect 90% of my readers to unsubscribe from my mailing list. If that is you, nothing wrong, please do so.

Just remember, you are on more than one lists… so if you still get emails, just diligently unsubscribe until you are wiped from all my lists. How many lists? Really only two.

If you buy the Humility activator or all 12 before tonight, Tuesday, January 19, midnight, you can use the coupon code ‘COMPACT’ and get 30% off.

Choose what you want