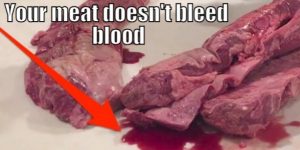 Yesterday’s article was about how inciting one segment of the population against another or others… and how this division has one purpose and one purpose only: to make more money for the 1% and impoverish the rest.

And it doesn’t matter which party wins the election, or the house, or anything… not one single politician isn’t it it for those 1% and for themselves, no matter what they say.

Here are some aspects of this, in the somewhat visible reality, visible for those who have eyes to see:

Nowadays most every food you can buy in a grocery store is bastardized in some harmful way.

In addition, the water they pump into the meat stuff,  is tap water… ugh. At least they could filter it, but they don’t.

It is, by the way, called plumping, and contains a dangerous nerve toxin, that makes the water not leak out of the meat… but can kill some… like me. I have the fragility of a yellow canary. It can kill me… and before it kills me, it makes my whole body hurt. It is, interestingly, the same chemical in many products, like chocolate… a binding agent they call it… I call it killing agent.

2. I muscle tested. Goat cheese has regular cow’s milk in it. Even the exorbitantly expensive Sheep’s yogurt in my area is doctored with cow’s milk.

I am deadly sensitive to the protein in A1 cows’ milk, this is why I am so interested. That kind of milk has almost completely destroyed my heart, my pancreas, and my thyroid… so I can’t afford even a little of it.

Whatever we are fed through social media, and the press, the fake news channels, is just as bad for us as grocery store foods… somewhat enjoyable, and that is where we are.

When I came to the United States my biggest bone to pick was: the food is tasteless, unimaginative, sloppy, everything goes, just like in clothing. Frumpy.

I had an elegant mother, and that forced me to be somewhat elegant too… but here I stood out like a sore thumb and not in a good way.

America wants you to be the same. Take sides, and consider everything different from your side as ‘them’. Not even people.

Eat the same… slather everything with some sauce, Ketchup, barbecue sauce, salad dressing… by all means, don’t taste the actual food… no, don’t taste that!

In this regard I have the same disdain for some other cuisines too, like Indian…

But what is, maybe, appropriate in a dirty hot climate where food is teaming with unfriendly bacteria that can only be checked by lots of spices, the United States is not one of those places.

No, The United States is a place for tasteless food… and that’s that.

And there is a heavy price to pay.

When I came to this country I weighed 96 pounds. I kept thin until I tried, and experimented with pancakes… then I tried the Whopper… You eat that cardboard tasting hamburger for the mayonnaise, the pickle, and the ketchup…

Weight that is now all on my midsection… so I look like a balloon with thin arms and thin legs. Ridiculous.

Most Americans have never tasted food that has taste.

I grew up in Hungary, was born two years after the end of World War 2.

We walked to the market and bought our chickens live, our vegetables and fruits freshly picked, drank milk that was still warm from the cow, eggs that were still also warm.

And my mother also knew how to cook, although she didn’t know how to bake… so I never acquired the taste for cookies or cakes.

No sauces in my house. No salad dressings. No covering the taste of the food.

I still love everything raw… and cooked, of course. When my mother made any of the vegetables, the three kids fought who can get a piece of cabbage, or the trunk of the cauliflower, because it tasted so good, and it crunched too.

Not in the United States of Merchants.

None of the vegetables taste any better than cardboard… And to my utter surprise, even local vegetables don’t taste anything… WTF? Did I lose my sense of taste in the long decades I have been living here?

But no. In my health measurements report I pay special attention to loss of taste and loss of smell, because they are early indicators of some big trouble brewing inside.

If for no other reason, this makes it a bright idea to order the health assessment:

When something is only brewing, it is not ready to kill… yet, but it will be unless you change something.

So for the next few days… till Tuesday midnight, I’ll do a special on my health assessment report… not machine generated, not questionnaire based. No. I connect, intimately, to you if you ask for it, and measure all 20-ish numbers… even though you may not be fun to connect to.

Yich… most people aren’t, to tell you the truth.

This is why you are paying me the big bucks… for my suffering… lol…lol…lol.

I am laughing, not just doing lol. I think it is funny to call what I make ‘the big bucks’, but that is just me…

OK, with that said, funny or not funny, what do I want you to do?

Why? Because my muscle testing can tell stuff that your doctor’s methods will only be able to tell you when it is already incurable, or almost.

And also, my testing is a whole lot cheaper. You pay for a whole year’s worth of monthly testing the same as for just one inaccurate test with the medical establishment.

There is also another benefit: no false positives…

Muscle testing while connecting to Source says that a whole 70% of cancer diagnosis is false positive.

When you hear of those people who were diagnosed fourth stage breast cancer, or some other cancer still living years later, you can be sure that the diagnosis was inaccurate.

You’ll also hear of people who died because of the diagnosis: placebo is a powerful medicine or a powerful killer.

Why can’t their tests do things as well as I do?

OK, if what I have said so fair didn’t convince you, then another few pages of stuff won’t either… you are a true believer in what… authority? God? Keep on keeping on.

For those who have been saying: stop teasing, Sophie… where is the link… here it is.

PS: oops, I promised something special… I almost forgot…

OK, how about a discount? Or prefer something for free?

Go and get it. https://www.yourvibration.com/1/your-health-measurements/