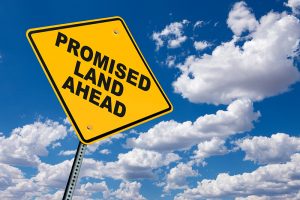 The Promised Land… what the F…?

Yeah, I expected this reaction. And no, I am not some religious cult, and the Promised Land is not somewhere physically, like on Mars.

The Promised Land is embedded in our DNA… a new Man, fully godlike, and fully equipped to live in productive peace that was foretold, the thousand years of peace.

I don’t remember the source, and I am not willing to dig it up for you now, but the six days of creation and the seventh day rest have been interpreted differently by different schools of thought. One of them said they are evolutionary periods, not days, and the last day, the seventh day, the Shabbat, is going to usher in the long awaited, long longed-for period of peace where man is not man’s wolf.

And when I say The Promised Land, that is what I mean: The new human. Man.

For that to happen, man has to change. Inside.

Outside he has been outwardly ready for tens of thousands of years, but inside he is still an animal, and not a nice one at that.

So the work of how to cause that self-alteration gets experimented with in my core group, and it goes the way it goes: often disappointing… sometimes hopeful.

Yesterday was one of those hopeful days… no reason to rejoice yet, hopeful is not a result. 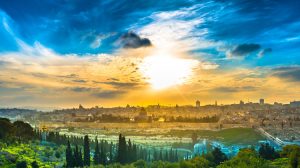 Hopeful is not a result

In fact that is one of the errors of thinking of a normal homo sapiens: they settle for hope, not for results. Normally, once hope is there, no actual action is going to follow… when something is built in the mind, the body is reluctant to confront that the mind is not reality, and confront that nothing has been built other than a vision.

There is a lot of talk in certain circles about instant this and instant that. Prayer that changes your brain, magical process that alters your DNA, and other utter B.S.

The current humanity, a full 70%, believes in miracles… god and angels. witchcraft, and Harry Potter.

The remaining 30% is undecided… Maybe it is the ‘who you know’, maybe it is entitlement, but only 1%, one percent, one in 100 people is willing to earnestly work for what they want.

And this is why taking anyone to The Promised Land is such a challenge. The actual one percent is busy doing what they do, and are not interested in changing anything. And the 99% has a track record of unfinished projects, failed dreams, work they do because they have to, they need to, they want to, and they should, literally never have worked earnestly for what they wanted… They may have worked towards a degree, or some other result, but never for something that they said they wanted… I do not know anyone who wanted a degree… do you? They wanted what it got for them, not the paper.

Work is the saving grace of humanity. Work is what takes a homo sapiens to human being. Work done willingly, joyfully, instead of a having-to.

And not just occasionally, but consistently.

I shared on the call yesterday that I don’t always feel like doing the work either.

So what do I do then?

What I do may surprise you. I sit. And do nothing but sit. Or play Freecell. I wait for the tightness, the aversion, the reluctance to pass.

And it does, every time.

What you allow to be allows YOU to be.

That is the principle. I don’t resist it. I don’t try to fix it. I allow it. And it goes away, and I can do the work: merge with you and see what I can see. Or transmit energies to that water container on the other side of the world…

I hear that my attitude, my behavior is not the norm. I hear that most people end up not doing what they said they would do, because the reluctance, or the fear, or the aversion says: you feel me, therefore you shouldn’t do it.

I am not sure if this is ‘universal’, but if it is, that would explain why my students got so excited by what I shared.

I first had the opportunity to watch another do what I do back in 1971. I lived with a philosophy student in a one-room apartment, and his desk was smack next to my bed.

Many nights I pretended to sleep while he was supposed to write his dissertation. He would sit there, organizing his little desk, sharpening his pencils, getting some water to drink… and do that for about three hours before he would write even just one word.

But he did write the whole thing, I typed it up for him, and he graduated. He immediately got a staff job at the same university. He got sh!t done… and that was how he did it.

He went through what you have to go through to get things done. Normal.

And upside down system that builds a track record of you being someone who doesn’t get sh!t done. Or picks and chooses what to get done.

My job is to help people turn this around, and become the kind of person who gets sh!t done… and eventually makes things happen. But even to get people to get sh!t done is like pulling teeth.

Regardless, yesterday was a hopeful day… and we shall see if all that hope was groundless… or not.

Soaring is another way to change who you are for yourself… albeit temporarily.

Can everyone learn to soar? Muscle test says 70% of people can. Chances are good that you can.

It is not complicated. It is a very simple method: you learn a few ways you can get yourself into an inspired state long enough for the world to catch up.

Nothing woo woo… you change yourself, temporarily, and the world can change with you.

Millions learned from a book, I hear… so it can be almost guaranteed that you can.

Go to step 2
PS: My health services are still on sale till Monday night… Read the related article