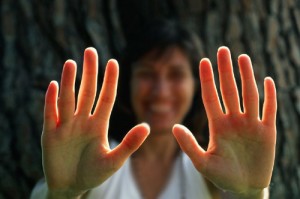 The question is, really, if the Light can heal.

The answer is a little complicated. and very controversial.

Can a person, like Jesus, lay his hand on you and the lame will walk, the blind will see, etc?

Unless the impediment is caused by a mental block, I don’t think so.

What is a mental block?

I am going to share an example: I am scared. In my 64 years I have been scared a lot. And I have been giving up mental blocks.

One of them was that nobody loves me. At some point in my life, about 40 years ago, my then boy friend caught me in a lie. He found out that there are people that love and appreciate me.

Which makes the “nobody” part of my steady statement a lie.

It was hard to give that up. My whole identity was vested in that to be true.

Once I gave it up, I felt exposed, I felt that if someone liked me or not liked me, I somehow had to do something with it. Whereas before it was just how it was: people didn’t like me.

So I had to give up protective statements like that, and each time it was harder.

This morning, as I am preparing to see the Atlas chiropractor again, I have decided that for the Atlas correction to do what it’s supposed to do, I probably need to give up something.

I connected and the “what” came fast and furious.

I need to give up being brutal, and give up lying about not being able to be all I can be for outside reasons. Because “they” don’t let me.

I see that most of that, brutality and being blocked was in many generations, and both my father’s and my mother’s side, so this seems perfect to give up on the history level.

This morning I prepared an activator for them, I downloaded the activator for myself, cried, experienced the fear and the nakedness, but it’s done.

I that was all that was blocking the “healing” then I am going to be healed.

If it wasn’t, I’ll ask Source again, and will do what is still there to block me, to hold me back, to “protect” me from being all I can be. Inside and in the world.

The Planetary Ascension is in Phase 3, at least the activators I am preparing are Phase 3.

I will test these activators on the Daily Connection by downloading the into the participants, on all four levels, including their history level.

I am expecting spontaneous healings… I do.

5 thoughts on “The Question Is, Really, If The Light Can Heal. Can The Source Heal? What is Doing The Healing When Healing Happens?”