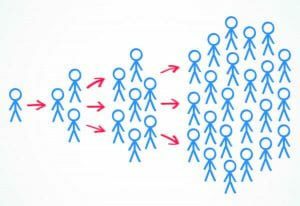 What is the evolutionary difference between homo sapiens and human being?

Homo Sapiens is the evolutionary level where current humanity is. There is no one at the present time beyond that level.

I guess the famous and made up story of the 100th monkey is about an evolutionary leap, but it hasn’t happened.

Or more simply: from where a person views themselves and the world.

Does the person find themselves on the horizontal plane?

What is the horizontal plane? It is the plane of survival, scarcity, competition for scarce resources.

And even if a person, a single person can move themselves onto the vertical plane, like myself, like you when you use the Avatar State audios, the rule applies: a single sparrow doesn’t make spring.

For an onlooker that state change, vertical plane, is a mystery. Or a miracle. Not something they can emulate like washing a potato in the stream (in the 100th monkey story).

Something more profound has to happen.

Now, knowing oneself, knowing the place you are is incredibly useful, albeit humbling.

Current homo sapiens is arrogant, self-delusional, pompous, and pretentious… belying the fact that self-awareness, self-knowledge is either lacking, or is over-ridden by lack of humility. So where we, as humanity are isn’t conducive to an evolutionary shift…

We need to be humbled.

A pandemic, a real (not manufactured) pandemic could do it, but evidently we are not there yet.

This leads to the question: what is the main difference between homo sapiens and human being?

The invisible part is that the current all-encompassing motive energy from the Selfish Gene is overridden by WORD. The power of word.

I have had the opportunity for the past 36 years to observe people who were given access to WORD… and for fleeting moments their beingness, their attitude, their focus was given by that WORD… but not very long. I could feel, I could hear the WORD dropping like a thing… and the Selfish Gene took over, every single time. And then it took a lot of work to re-establish the WORD… if one’s position depended on it.

One could say that I am a product of Landmark Education. A onesie…

At the moment my ‘vibration’ is 960… that allows me to BE MY WORD, i.e. my attitude, etc. to come from my word for about three hours… and I am very skilled at re-establishing my WORD when I drop it.

Landmark Forum Leaders seem to be able to reach 30 minutes… And need a long clearing conversation with a coach standing by to re-establish the WORD, in the breaks.

When you are in WORD mode, you don’t just spout words from the mind: you are present, and the words come from the Tree of Life, from your own present experience, they are created in the moment.

If you are skilled in hearing the difference as I am, you can hear exactly when the Landmark Forum Leader turns into a spouting words machine.

No beingness… just a torrent of words, from memory. Nobody home.

I am in the middle of the unpleasant task of recording the 48 Bach energies of all the feelings that I have been able to identify. There are two or three suspects for duplication… but that is not the point I want to make.

I had the insight that all feelings are a certain combination of survival pressures of the Selfish Gene.

All living beings are vehicles for the Selfish Genes… and all the Genes care about is survival now and survival forever.

For survival now the Genes need food, shelter, water, sleep/rest, homeostasis, a place to poop… and maybe even other people’s support or non-exclusion. And when I look, I would risk adding items that don’t look or sound necessary for survival, but they are: attention, play, and feeling good about oneself.

It’s all for survival now.

And for survival of the gene… i.e. offspring, a whole lot more… we could say that for that a person may need another layer or two or three of Maslow hierarchy or needs.

Even my favorite Hungarian engineer turned author, Margoczi, when he talks about the ‘software needs’, his truth value drops to 20%… Which is still higher than Maslow’s 7% truth value… but still doesn’t get to the root of things: it is the Selfish Gene that needs… on the homo sapiens level there is no person yet. Person will come with the human being level.

When I ran the Validation Challenge last year, the challenge was to grant beingness, grant personnes to singular others in your environment. See that they are a person.

And, of course, you can only see what you have, what you are… so every participant failed that experiment. Not even for single moments were they able to see a person.

The same is true for seeing value… homo sapiens cannot see value in themselves and in others. Use-value: yes. But intrinsic value? No.

Intrinsic value is not useful, and the Selfish Gene is all about useful: useful for survival, or useful for procreation.

That is all the Selfish Gene is concerned with… and although it sounds really bad: it is what it is.

If you fight it, you beat yourself up bloody, and yet nothing will happen.

When you manage to look at the world from the vertical plane, you can see, temporarily, things that are of no concern to the Selfish Gene, beauty, honor, dignity, and many of the myriad intrinsic values… but your ability to hang out on the vertical plane is very limited… a Landmark Forum Leader with thousands of hours of training can only manage maximum 30 minutes… and you don’t even know how to train yourself, do you?

So back to the 48 Bach Energies, or Bach Feelings, the insight I had is that every one of them is a certain combination, or derivative and combination of Greed and Fear.

Either wanting, or complaining and grieving that it isn’t given.

Greed wants survival on both levels… now and forever.
Fear wants to avoid all threats to either survival levels.

Humans are simple machines due to being a vehicle for the Selfish Gene.

When the next evolutionary level reached… if ever… then there will be a higher order ‘need’… the need for creation… the need to use one’s time and resources to be a creator.

When the Bible says, paraphrasing: god created Adam to its own image, the Bible talks about the potential in the DNA… not the actuality of Adam… or homo sapiens and its previous evolutionary levels.

The Bible means the species that fully activated the spiritual capacities in the DNA… the DNA that was already there with Adam.

An ax murderer and the Dalai Lama, Jesus (if we decide that he lived), Moses, Buddha, Einstein, Martin Luther King, Nelson Mandela, Lao Tzu… they all have the same DNA… with the spiritual capacities differently expressed.

But the DNA is the same.

I have 70 of the 160 spiritual capacities active in my DNA… but you cannot be a human being in an environment of homo sapiens.

The single monkey would have gone back not washing his potato, had not all the monkeys followed suit.

Of course it is still just a story to demonstrate the Tree of Knowledge idea how evolutionary shift may happen.

My job is to create a blueprint, a process map, a step by step method to turn a single homo sapiens into a human being.

And while you cannot turn yourself into human being, using the technology I have developed you can climb higher on the ‘vibration’ scale, spend more time on the vertical plane at will, create with your word… and altogether have a better life experience… by far.

It depends on where you are now.

And how would you know that?

My Starting Point Measurements is a snapshot of where you are now. How much access you have to the vertical plane, how much you can trust yourself to actually do the work that it takes to become more, to become someone who can.

It is a mistake to enroll you into a program that you’ll suffer in, because you are not where it starts… and it is also a disservice to the others.

How do I know? I have students who sign up to everything and then suffer… The higher your pretense level the more you are likely to do that.

So I recommend that you get your Starting Point Measurements done… And if it is bad bad bad… don’t despair… you are not doomed. No one is. Just ask me if I have something for where YOU are at…

Many have aspirations, desires, ambition for which where they are at now is not a match… and if you are in this category, you are especially suitable for my programs. So make sure you embark on matching where you are with where you want to be, so you can have what you want.

Get your Starting Point Measurements
PS: I go into more detail about the same topic, in today’s Sunday Call… you can get it if you are interested in going deeper into the topic. go to https://www.yourvibration.com/1/sunday-rant to get it. You’ll have an option to buy this call, or subscribe to all the calls.

2 thoughts on “Are you homo sapiens or human being? Let’s look…”