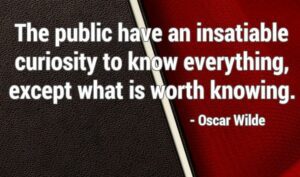 Let me start with a joke:

How to have a million dollars in business? Start with two million

How do you make a million dollars in the restaurant business? Start with two million

This is the joke that is making the circles in my brain when I think about how to have clients who have ambition, motive power, and actually accomplish stuff?

You should start with students who already accomplish stuff…

It is important to ferret out what is the one characteristic, of capacity, or habit that will make someone willing to expand, to grow, to be guided to be all they can be.

My hunch, currently, is curiosity.

Curiosity is the INNER desire to expand. No matter what I throw at someone who is curious, they will grab it and run with it, sniff it, test it, and likely will succeed with it.

So if and when someone’s curiosity score is higher than 1%, and to the degree it is higher, to the same degree I can succeed teaching, training them. 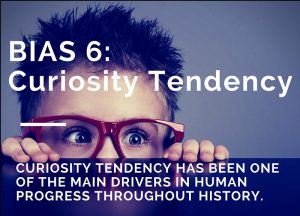 You’ll find that if you opened this article because of the title, you probably just wanted THE answer to that question… idle curiosity…

If you, like most people, scan the article for interesting tidbits, then you are still only curious… You are only interested in what you have been interested before. Nothing new can reach you because you don’t want anything new.

But if you READ the whole article you actually may have ‘real’ curiosity, something that is as rare as .25% of humanity… That is one in 400… or one or two among all my readers. I know both of you.

Some mornings are like this morning: the insights pop like popcorn… almost too fast to be able to appreciate the beauty of it.

This happens on Thursdays a lot. I have an appointment with Bonnie tomorrow to record our weekly ‘Distinctions’ podcast.

The name focuses my brain on distinctions… and…

nothing make the popcorn pop faster than looking at the world through distinctions.

I am finding that a few weeks old baby bear is more intelligent than as a five-six year old human child.

When the baby bear finds something that can roll… it immediately gets the essence of it: hey, it rolls… Let’s roll with it. A young child, instead, is bothered by the fact that it rolls.. it wants it to do what it wants it to do. OK, I should have said ‘he of she’, I apologize… I just couldn’t see he or she.

I posted an answer in Quora some time ago sharing that I raised my IQ from 110 to 160… and it brought a lot of naysayers, and a few curious ones. One person, already intelligent judging from his attitude, asked me to share how I did it.

I shared an aspect of it, not the whole thing…

I am starting to see that the most important aspect of human intelligence is the desire and consequent (resulting) ability to see patterns.

But I can also see that without curiosity, that will not happen. 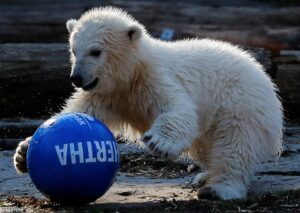 So what is underneath of the child’s lack or curiosity? Why would an animal be more curious?

It could develop later, but because today’s style parenting excuses a child from the need and necessity to look… it won’t.

Thus 95% of all people NEVER look at anything in a way that would poke the box and awaken curiosity and pattern recognition, even for a moment. 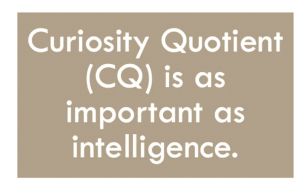 So humans, children and adults keep on trying to put a square peg into a round hole… never quite seeing the problem.

I feel like a one-eyed person in the country of the blind.

A little aside: the conspiracy theorists are incurious. They eat what they are fed. They never ponder, never research, they are satisfied that they got the answer.

So if CQ is as important as IQ, or if curiosity is the foundation of intelligence, now it seems obvious and clear why the average IQ has dropped to 70, while it was 100 just a few years ago.

Comparing an incurious person to a blind person is not accurate: the blind has the touch, the hearing, the taste, and smell… But whatever cannot be detected or distinguished with those: he or she, the blind, will not believe it exists.

Now, if we add thinking as a ‘sense’…

…it is a tool just like the other five, you can observe yourself and other people and notice that thinking is not present. I mean thinking as in ‘critical thinking’

The people who must invent reasons to hate Obama, Hillary or Biden, liberals, etc. are not able to think critically, and they swallow without chewing what they are told.

No chewing, no digestion, no elimination. Just swallowing and regurgitating.

The young child doesn’t distinguish the roundness, the sphericalness of a ball and is annoyed that it rolls away.

Making up or repeating tall tales about what is going on, is the same thing as not seeing that the ball should roll… it is its nature.

And how many percentage of humans can’t tell, can’t chew, won’t chew? 99%. Tragic.

So you see in the world of the blind a one eyed person sees stuff the blind can’t even imagine. 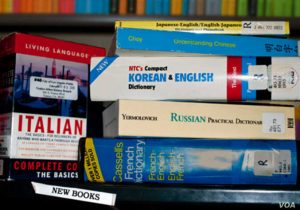 Seeing patterns and recognizing them is high IQ…

I am working on distinguishing what one could do to raise another’s motive power, another’s ambition, another’s whole world with regards to achievement.

The world seems to agree with me, because in some of my ‘classes’ where I am a student, this issue keeps coming up, both in the ‘teaching’ and in the questions.

One person keeps on asking what she could do to stop procrastinating.

The ‘teachers’ keep on repeating: get clarity… know what is yours to do and do it. Day in and day out.

But, unfortunately the person who asks the question has low vibration and low IQ… and for the answer to be useful, she would need a higher IQ, a higher vibration, and a lower ‘about-me’ score.

And the willingness and the courage to look to see what is hers to do. 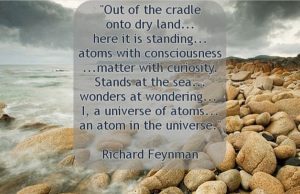 To her detriment, she is pretty…

Only responding to challenge with curiosity will dislodge her from her comfortable ‘but I want to, that is why I am asking questions!!!‘ place.

I discovered this morning (I told you, Thursday mornings are popcorn-like!) that I also want to just ask questions and get answers… I ask my questions of Source (muscletesting).

I asked this morning: shall I take a shower? And the answer was no. But I have b.o… body odor…

And then it dawned on me: this is a question I need to answer myself. I am humbled… I can see that the pull of getting answers without looking is strong even in my DNA…

The other day I had an unusual last session of a workshop (integrity). We had a conversation about power, having power, and how to have it. 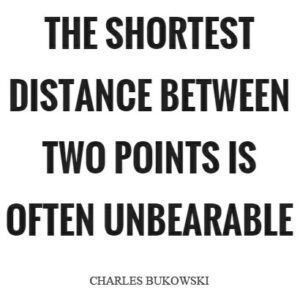 My recommendation was to distinguish powerful by finding all occurrence of what is powerless, what is not powerful…

That is, by the way, the proper way to distinguish… while the whole incurious world scrambles for definition.

One of all the students took up the challenge. And has started to look… OMG… I hope he won’t stop looking.

I am starting to see that maybe looking to distinguish is the secret sauce. The ‘secret sauce’that turns a useless turnip into someone who has some motive power. 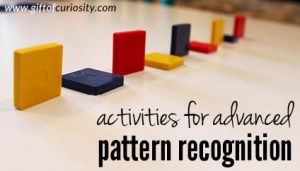 A turnip or a ball… equally lack inner motive power…

And 99% of humans are a lot like a turnip or a ball… they are moved by forces outside of them. and they settle when something stops them, an obstacle, a flat area, whatever doesn’t give them a slope to roll on. 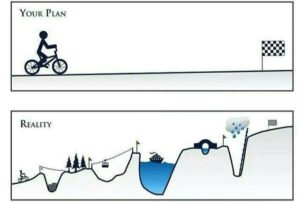 during the class I am the ‘slope’, and they have an experience of being alive… But no matter how much I am present, even if we lived together. even if I were a seeing eye dog. it would not transfer the motive power to them… even then I would have it and they would not…

I activated The Sight capacity the other day to the people who showed up in my What’s Missing class. But the capacity doesn’t do the looking, the person needs to do it.

And if you don’t have the habit of looking, you will never see.

One of the people in that class has the capacity open but doesn’t use it. She is the ball that rolls down the hill… and stops in the valley… No inner motive power, other than for survival… Pure Selfish Gene… nothing beyond.

So the questions, the intelligent questions you would ask if you were curious: how do I look? What do I look for? How do I know when I see it?

For now, do what the guy in the Integrity Course is doing:

find something that you want to distinguish.

Powerful is a great idea, but you may have a more personal question. 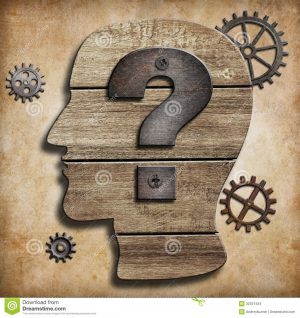 For example: you could distinguish healthy…

Just remember that distinguishing only concerns itself with what it isn’t… not with any part of the definition.

For most of you even the instructions sound stupid, or sounds Greek… but nevertheless, please try.

The more attempts you make the more of the cobweb on your brain will fall away, the more the cataract on your eyes will dissolve.

It is a long process, but it’s worth it.

This is exactly what I did the past 40 years, to distinguish 70% of the crucial distinctions. The distinctions that can make one to be an Expanding Human Being.

Unless your life expectancy is just another few weeks or months, it is worth it.

Even if your IQ is the current average of 70, you can expand yourself. and your intelligence by doing this exercise (distinguishing) in earnest. 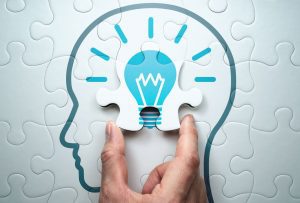 It’s a place, a private place, to document your progress… to make promises and keep them. On the long haul it increases your integrity, your experience of yourself, in additions to increasing your intelligence by forcing you to look.

Get access to the hero system…
The system also includes a conversation with me. on the phone/web or in email, to get you started and decide on the exact kind of process that matches where you are at.