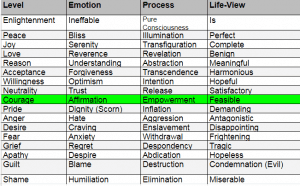 When you look at the consciousness level chart, as much as I don’t like David Hawkins, he is right about some things… And dead wrong about many others.

In raising your consciousness, the highest and ultimate target is what is called ‘enlightenment‘ which doesn’t mean anything. So instead of enlightenment, in the work I do with clients and students, I endeavor to take them to the next evolutionary level, which is human being… So we’ll call our call: human being, or fulfilling the Original Design encoded in the DNA.

It is not easy to notice, because it is hidden in a top right corner of the chart… but if you look and set your life at the furthest and highest consciousness, you’ll notice that it says: no emotion… and life occurs, on that level as it is what it is. Not how it should be, not how it shouldn’t be, not right, not wrong, not sad, not happy, not good, not bad… it is what it is.

This is a recent video by a dude, British accent… but it is OK… I have never made a video on releasing… maybe I should.

In the same chart he is absolutely and totally wrong about ‘ineffable’… an ecstatic state that is incompatible with enlightenment.

On that level, and that is what you should work towards, the mission is: the emotional state of no emotions. Feelings? yes. but emotions? driven by words? no. None.

I have been climbing the consciousness level scale for a few decades now. And the things have changed for me are this:

Imagine a scenario: it’s a major intersection, and two vehicles collide. You are standing on the street corner… No compare the feeling you have when you look at it from an airplane… no sound, no gore, no emotion.

That is one of the big changes when you climb the Tree of Life, or the consciousness level scale

When you climb higher on the consciousness scale, you say less and less about what you see… so your personal reality and reality are more alike… As a result you are more astute, because all the emotions that distort your view come from the words. All of them.

So in essence, these are the two differences in experience between low vibration and high vibration.

From how high you look at things from… so they don’t threaten you personally, and how much you say about things.

Now, some people who teach you know that what keeps you miserable is what you say about reality. Your meaning.

These are the people who encourage you to change what you say… But unless you see more, and not just wear a filter, your astuteness suffers: you are an idiot who refuse to deal with reality.

On a lower level of vibration these words cause a cognitive dissonance that is unbridgeable… so it is not useful.

Other people yet try to help you to release the emotions, the feelings you have as a result of the meaning you have given.

I haven’t much seen that working… Despite the fact that I have known quite a few people who have done the release technique, letting go, the Sedona Method, blah blah blah.

What I have found works, what has worked for me, what seems to be working for clients of mine who are doing the work, is taking responsibility.

The act of taking responsibility is 90% of distinguishing what you said that caused an emotional reaction and a behavior and result in life. This 90% is what removes the reaction, and allows you to see things from a different vantage point, emotionless. Meaning: it raises your vibration, at least temporarily. Often by a lot.

And the other 10% is used to change your behavior by looking to different options that belong to you.

How to allow emotion to be… so it can go away:

On a certain level of consciousness you’ll realize that a capacity is always coupled with skill.

One of the biggest shortcoming of our species, homo sapiens, is that it over-values comprehension. It lulls people into believing that comprehension is what is important, and it is also enough.

And, of course, it is a bunch of huey… meaning, it’s not true.

It is not enough, and it may not even be important… there are a lot of things I can do, exceptionally well, that I don’t understand at all.

Astuteness is seeing what is the right action in a situation…

You cannot learn astuteness from books. You actually cannot even teach astuteness. It grows only from the person’s self-directed observation, the kind that reveals the inner working of things, patterns, whether they are visual, behavioral, emotional, numerical, language, politics…

What increases a person’s intelligence most is pattern recognition… When it is not you who is looking, it is consciousness that is looking.

Einstein wasn’t thinking up the theory of relativity, he climbed to the level of consciousness, locked out of interruptions, and worked his way up to 5-6 hours of being able to stay with it, so he can translate what consciousness already knew to a human level, to language.

A good mechanic, a good doctor, a good massage therapist, a mathematician, etc. don’t figure things out: they work with consciousness… and often cannot explain how they got to the solution they got to.

But without intentionally learning to recognize patterns consciousness will never engage… it will stay, aloof, on the side, uninvolved…

If you hope that you can do what you do, living unconsciously, mechanically, and DNA/capacity activation will do anything for you, it won’t.

You don’t need to understand what the heck I teach… you need to DO what I teach. And do it as long as it takes to get good at it, to get to unconscious competence. That is when you can start learning to do something new… because consciousness has taken over for that skill.

As long as you have to remember what to do, you are not using consciousness…

The biggest problem I see with our education system, is that it doesn’t seem to acknowledge that this is what it is supposed to teach… skills, competence, patterns in certain areas.

Mathematics, physics, algebra, chemistry, biology, geography, history… all the subjects in school are supposed to teach pattern recognition… and if you look, they don’t… although they could.

Without paying attention and enjoying seeing the patterns, these subjects are boring, and it feels that you will never need what they teach… but the real truth is: you won’t be able to use what they teach, because without patterns they are useless to you.

And if you look… they have been. Every person I have spoken with has told me that…

It happened in the last 100 years, by the way, that neither the teachers, nor the students have their DNA capacity to see and recognize and use patterns… The superpower of most anyone who has made a name for themselves.

Interestingly, some of my students who haven’t done well in life are able to see patterns in some areas of life and not in others… Some see patterns in humor… some in redirecting efforts to muscles that are not injured… repairing machines… music… poetry.

What is the experience when consciousness is doing the work for you?

It feels like you have a feel for something… not words, no way to explain… you just know and do. It is joyful.

But it is not automatic. It takes work, and a lot, before you get to unconscious competence…

What is in the way? Your overvaluing knowledge and understanding. There is a saying that understanding is the booby-prize… the Teddy bear you win at the county fair.

What you want is a great life you can enjoy, maybe even love. Isn’t it?

I do, however short the rest of my life may be… so I am still learning new things.

I want to learn to create courses where that skill building is natural, and more people will engage than at the present time.

I attended part one of an online sales presentation to create courses that are more impactful than traditional courses.

I am sitting here with what should be familiar to many of you. It is an internal conversation, between me and me… saying: I can see that they can… but I can’t. Probably can’t. I am probably not smart enough to do what she teaches.

So let’s see if I can overcome this tremendous resistance I have to try something new I can fail at.

So let me see my objections… and see if they are valid.

Too much compared to what?

If I can make a more valuable course for people, and more people will want it, more people will do it happily, and I can charge more for it… am I willing to exchange my time and effort upfront for a lot more money? Yeah… I guess. lol.

That is not certain. I can start doing one out of the 10 elements she says a good course should have… so I can start with one, one that is easier (relatively) for me… How about the mission of the course? I think I can do that.

Then once that is done, I can look for the second easiest… and I will be done in no time.

#3: I have too many courses already

That is true. So maybe I can rework old good courses and add the 10 elements… and do them again. I won’t have to worry about the content, only about the new elements. I can do that.

and so on, so forth.

I am going to, maybe, rework the Soul Correction workshop with these ten new elements… Watch out for announcements (hopefully!)

In the meantime… I am going to teach what I learn as I am learning it. All ten elements. It starts with mission… your mission.

My mission is that you get your mission… so it is mission creation… for you.

If you want to partake in this class, let me know. I’ll schedule it if I have enough students raising their hands.

You can have a vision of any sorts… business, intellectual, spiritual, health, accomplishment… whatever excites you enough to spend a few hours developing a mission for it.

If you have just had your DNA adjusted, child genes, permission gene, responsibility gene, I’ll have a class for you where you can create your mission… I hope it’s not late for you. I’ll send an email with the time and the date.

So what should you do now? Other than start thinking what could be your mission for the next few months?

If you are willing to be generous and post a comment, anonymous if you wish, with what you could take on, I’ll reward you for it. I reward ‘good behavior’ and I’ll email you or mail you something valuable. What? It’s a surprise.

If you send it to me in email, I’ll read it, but no reward. Good behavior means do it the way I ask you to do it.

Now, start thinking and posting. I can’t wait to know what you are up to.

9 thoughts on “Levels of consciousness and other important distinctions”