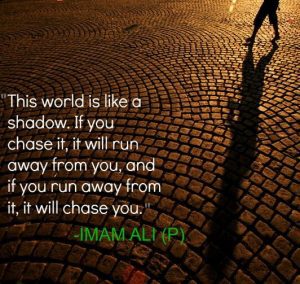 There is a misunderstanding of how things work that clips a lot of people’s wings.

It comes from the ‘goalsetting culture’ that has proven itself a misery-maker. Being motivated with what you want…

You commit to a result.

But results are outside of your power. They will either happen if you do the right steps or they won’t.

Life is a lot more complicated than boiling water. You can promise that water will boil if you manage to give it enough heat that it reaches its boiling point. But if your promises are in that sphere of predictable, then you are not going to amount to much: you probably live a life of quiet desperation.

Anything you pursue is running from you.

The reason that of all the people on Earth the people of the United States are the most wretched is because of their pursuit of happiness. 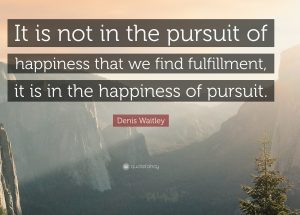 The same with any goal…

Even when you achieve it, it comes with disappointment, because it doesn’t get you what you wanted to begin with.

In the DNA adjustment experiment

This is the first time we are doing this exact challenge.

The first issue I am seeing is that about one third of the people somehow turn back one of the child genes, the entitlement gene… and expect things done for them… again.

The second issue is the pursuit.

Some people look at themselves through the filter of never sticking with anything. They cannot see that everything is a process… I mean it, they cannot see it. They see through the eyes of a 3-year old mesmerized by magicians who create something from nothing, and they decide that they can’t do it.

And they never actually see that ever single person who has ever achieved anything went through a process, keeping their eyes on the process, minute by minute, hour by hour, and not on the ‘goal’, not on what the process is designed to accomplish.

Nothing, literally nothing under that big blue sky of hours can be attained unless your attention is on the process, and not on the result.

And when you do, you live a life worth living… because the purpose of life, the meaning of life, is doing the work you are meant to do… not the result.

And at this point, every single person I know would be better off focusing on one thing, have it as the context of their lives, to become the best they can become… through practices…

We are practicing becoming responsible for all of it, becoming cause, and we use the questions, the racket process, and other processes I haven’t introduced yet.

But the underlying ‘one thing’ is to become the best you can become… so you can do good work.

But you can’t do good work if you are focusing on the ‘prize’… you’ll quit, you’ll cut corners, you’ll hate yourself.

Yeah, throughout this I had one superpower:

Although I like to be right, I am willing to be wrong… and not beat myself up about it.

When you are wrong and you don’t like it, or suffer about it, you give precious energy to it… and I never did of that any longer than a few minutes, or occasionally a few hours, but rarely.

What gets you stuck, and stuck in a rut, or stuck in a godforsaken place, is making yourself wrong for having been wrong, or try to prove that you are right… and make another person wrong, or the circumstances wrong.

But you only have power to change things in reality and reality is right now… not in the past.

So you look and see where you are, and take a deep breath and say… OK… f… it, I am here. Now what?

Ultimately it is this conversation with yourself that puts you into the driver’s seat in your life. And in that seat you can sit and look at what is going on,

I call this process: ‘responsibility’ and the more all-encompassing this is, the more likely that your next move will take you out of the stuck place to a less stuck place…

It is magical, but it is not magic.

It won’t transport you all the way to stardom, or riches, or eternal bliss.

Responsibility, the process, and the racket is an invisible machine, and they are connected intimately.

To the degree you master responsibility to the same degree you are victorious over the machine.

I have been listening to Werner Erhard’s Relationship seminar, and I feel like in the comparison I should just shut up. Werner is many degrees more brilliant than me.

But if and when I am willing to ask some questions, I stop being overwhelmed by his brilliance, and start feeling confident, and valid in my work.

So maybe being THAT brilliant is not an asset, not an advantage, maybe it is a hindrance.

I had listened to this same audio a few times before, and I am still not able to implement what he teaches. Great theory… no bridge to the other side, where the implementation lies.

And I even have more capacities, spiritual DNA capacities than you can sniff at… and I still can’t… can’t really make the ideas mine.

Does he? Muscle test says: no… He can’t and doesn’t either.

So wanting to be like Werner is suddenly off my ‘goal list’… I want to be me, the best I can be, with what I have. And if it is not brilliant… so be it.

OK, I think this is enough for today. This article made quite an arc… to anchor it all, I recommend the Racket Course… and if you can swing it, the live ‘Create turning points in your life’ workshop.

Once I am done with this current group of people, people for whom I have (OK Source did it at my request) adjusted their DNA and turned off the entitlement genes, turned on the permission and the responsibility genes…

…I’ll open up DNA activation again. I already know more than I knew on September 14 when I started. Whoa, a whole month has passed? Time is running when you are having fun…

Get the Racket Course
The next Turning Points workshop is on October 30, Saturday at 4 pm. I can make it earlier, but I won’t make it later… Ultimately the time needs to serve most people… but you can buy it and get the recording in my Mobile app.

I have one person registered who hasn’t had her DNA adjusted. I am going to see if that can work: my hunch is that it won’t… But I haven’t decided yet. I have taken her money… but may cancel her live workshop until she can get her DNA adjusted.

And an interesting observation: certain soulcorrections’ entitlement gene keeps on turning back on… they are doing it themselves… says Source. If they committed to keep the adjustment alive, I adjust their genes as soon as I notice that they futzed with them… hoping that at the end of the 30 days they will accept that they actually need to do what theirs to do… or remain victims. Their choice.