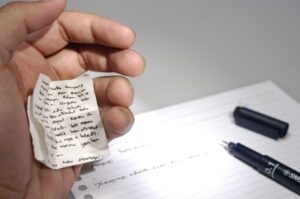 One of my students is working on creating a cheat sheet for people who have difficulties in life.

Why a cheat sheet?

Because when you have difficulties in life you find it hard to even think, let alone look at the issue with sober eyes. Without emotions. Look at it like a math problem, or if you are not good at math, a missing ingredient problem in the kitchen.

And if you are normal, if your DNA is what 99.99% of people’s DNA, then you have many difficulties in life, even if no one knows about them. Sometimes even you don’t know… oops.

What kinds of difficulties are we talking about?

I am going to talk about difficulties I have helped my students overcome successfully or not successfully.

One that came up again after being in hiding from my view for about a year was what I mentioned yesterday in my article about Alex Jones.

Even those it is a killer, only a few people ever complain about it. Unless you are a student and we talk almost daily, I won’t know about it.

Because you’ll even lie to cover it up.

It is the retained gene, a child gene, that was supposed to turn off at age 3 but didn’t.

One of those genes considers your fantasy reality. And makes you spend most of your time there… When you do, we also call it a ‘desire trap’. It ultimately makes you miserable. How? Why? because you build castles in the air the like of which there can be no castles in reality.

And because it is so easy to build stuff, success in your imagination, but it is so a lot of uncomfortable work in reality. And dammit in reality you need to know how to do it.

And in reality other people don’t like what  you built, or don’t want it.

As a child it that gene had a purpose.

But from age 3 on, you should have gone off, experimenting, discovering, getting into trouble. But because the gene remained on, you keep doing most of your life in your head, not in reality.

No matter what anyone says to you, until that darn child gene is turned off, you are not going to do what is yours to do. And you will be unfulfilled, unhappy, morose, and at best dutiful at being alive.

This child gene is especially ‘deadly’ to your aliveness if it is coupled with the second child gene, the entitlement gene.

Under age 3 the job is to keep you safe, fed, and clean. Manageable.

Ultimately human babies are born with no knowledge. They mostly even have to be slapped in the butt to start breathing.

They need to be taught to suck. To burp. The only thing they do without learning is cry and scream… Whatever comes from wanting.

And it is good that they do, albeit unpleasant, otherwise the parent would forget about feeding or cleaning them.

If that second child gene weren’t on, they wouldn’t cry, they would just wither and die.

But at age 3 the child is able to walk, able to talk, and the second child gene is supposed to turn off, so the child learns new ways of getting what they need…

Some of you still whine, cry, shout, scream… to get attention, to get what you want.

It’s not working very well, is it?

Now, the biggest price a person pays for having one or both of their child genes still on is their tenuous relationship with reality.

On one hand they can’t tell truth from fiction. On the other: they don’t even want to look. And when confronted they argue, they justify, they explain… and NO TALK makes a difference.

They are ENTITLED to see the world and themselves the way they want to. Reality? That is not for them.

So you can see that they will have a lot of trouble, lot of heartache, lot of conflicts.

It is like driving on the wrong side of the road certain that everyone else is wrong… deadly.

If you look at the United States right now, you find groups who demonstrate clearly the effects of the child genes: they are JUSTIFIED in their opinion, they KNOW how things should be right, they are butting heads with everyone else… and there are tens of groups like that… whether it is about

Take out entitlement, take out ‘What I think is true’, the two child gene behaviors, and all the arguments stop… and people put their attention on work, on enriching their lives, family, etc.

But instead they argue… And if you don’t argue there, you argue where you are…

Don’t forget, only about a million people have their child genes off… out of nearly eight billion.

I have a number of acquaintances over 90 years old. 100% of them have the child genes off. I know some, interestingly less 80 year olds. They all have one of their child genes on… the entitlement gene.

I have been pondering why the child genes keep on popping back up for some people.

It seems that the responsibility gene is the ultimate adult gene.

Adult means being willing to live without leaning on, counting on, expecting, maybe even demanding crutches from others, from government, from god, from family…

When you are squarely in your personal power, not a victim, not run by the racket, then you are an adult.

It is attainable, but obviously one needs to give up all the crutches… the crutches that make life unfulfilling but comfortable.

We call that responsibility. When nothing and no one will do what is yours to do, neither in reality nor in fantasy.

The experience that you are on your own… and guess what? It’s wonderful.

As long as the idea that you are on your own is horrible… your access to the adult capacities, including responsibility is either off, of limited in scope.

Last night I noticed that I am demonstrating improved health. I earned it. I was curious what I did that earned me that… I sleep better, I go to the bathroom less frequently, I feel better too.

And Source says that my vibration went up only 10 points shy of the maximum.

I have no idea what will happen when I reach the maximum. Source says I won’t die because of it.

I guess vibration signifies to what degree you’ve become a human being.

Year by year I owned more of my power… That is how it works.

It starts, unfortunately for humanity, with a DNA adjustment.

Turning off the child genes, and turning on the responsibility/adult gene.

I have opened the DNA adjustment shopping cart a few days ago… and to no one’s surprise no one has asked for it yet.

What is there that stops them from asking for it? To put themselves at risk of knowing that they are weak, and that they don’t trust themselves to keep them on… so why bother? source says this is 70% or the excuse people have.

Or maybe as I suspected, the holidays are coming. 10% says Source.

or this, by the author of The Four Agreements: We only see what we want to see; we only hear what we want to hear. Our belief system is just like a mirror that only shows us what we believe.

Both are true. Both are deadly.

I have had some compulsive liars as clients. They never did anything that would keep the new capacities on, the capacities they paid real money for, because they never believed a word I said. So why bother… right?

Anyway, if you want the link to the DNA adjustment, look at yesterday’s article.

Instead I’d like to give you something that is easier for you to wrap your brain around: The activator that turns on appreciation and thankfulness for the coming Thanksgiving holiday, eight days from now.

Abundance is not just about money… it is also how you feel… loving, appreciative, peaceful.

If your vibration is above 200, you can get the audio. Or if you are willing to go to the trouble to infuse the audio into water or milk or juice, whatever you drink throughout the day.

For that you just wrap a pair of large headphones to a container that is flimsy enough to transfer vibrations to the liquid. Bottled waters are the best for this. And then drink it all day…

It works. The audio (and the bottled remedy) have 192 energies last time I counted them. Likely more…

But if your vibration is at or under 200, the audio won’t work for you: you are too rigid in your worldview to respond to some audio.

So your solution is the bottled remedy, or the audio to make your own. Drinking it. minimum 10 times a day.

Did you think yesterday’s transformation will last till today?

Get ready for Thanksgiving
PS: DNA adjustment is not like taking out a splinter, it is more like cutting out cancer, or organ transplant… The body needs to re-organize itself into a new entity.

Cancer, like the child genes, claim all of your life… and reproduce not what you really want but itself.

PPS: I just got an email claiming that I bought something through paypal and my invoice is due. This in addition of 200 emails claiming that money was deposited in my account… or due to me… or whatever.

Why are these scams and fishing emails keep coming? Because people are stupid.

What causes their stupidity is the child genes…

So children fantasize about getting money, maybe because of the law of attraction scam, and they fall for it.

Don’t be one of these stupid people. But with your child genes still on, you will fall for scams that promise stuff you have already fantasized you’ll get.