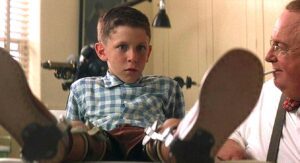 Forrest Gump again… to clarify some of the most important distinctions a person can have to live a life worth living.

Some of the most important, and most life altering distinctions one can have are coming up nowadays daily in questions, in podcast… and I am happy about that.

The two that come up and will come up every session is choice and of course context.

Choice is easy to see…

…the person who selects something to do, they select themselves. Not some reason is doing the selecting.

In both cases YOU didn’t select, the reason selected, whatever came after the word ‘because’.

Most people, literally the eight billion, never or almost never chooses. They decide.

Deciding is cutting away the alternative…

And the choice is made by some reason. So the person abdicates responsibility in their choice and gives it to some reason.

And then they feel powerless. And for good reason: they gave away their power.

Some people, although they are not yet part of the 1000, because they lack distinctions, are making choices in certain areas…

Yesterday I listened to a long conversation between Tom Bilyeu and Robert Greene. Greene is writing a new book, and has also had a new book just come out.

They had this conversation to promote the published book… but yet it was mostly about the not ready book.

Greene had a devastating stroke a few years ago that left him in pain and barely mobile.

Drive is a force inside that chooses. Obviously Greene has drive… In spite of his difficulties, physical and emotional, he chooses to write meaty books that require a lot of contemplation, self observations, and observation of others. both to write and both to read.

The reason he isn’t a 1000, yet, is because he doesn’t have the responsibility gene on. He still blames…

I have a theory that the worse things happen to you the closer you are to become a person. Then how you handle the misfortune that befalls you will determine your future.

He has an opportunity to use his stroke and daily struggle to turn on responsibility, the gene, and he isn’t, he hasn’t done that.

He is still in blame mode.

Now, If you look, you’ll see something very important here: the important question is: can I be responsible that this happened to me? That this is happening (whatever it is).

And suddenly you’ll see that the answer to that question depends on the context.

If your context is: I am an object in a world of objects, and things can happen TO ME… done TO ME… and I am not responsible… then again: your future is set… at least for the moment.

It take astuteness and courage to own what is yours, to take responsibility what belongs to you.

Astuteness because it is not easy to see what you did, what you thoughts, what attitude you had that was instrumental in bringing what happened about.

Those are almost always inner stuff, and invisible to you and others. Invisible dynamics.

And courage because you have to LOSE FACE, you need to look bad, you need to have been wrong… so yeah, it takes courage.

And both astuteness and courage is in very short supply in humanity.

Doctors need to learn hundreds of diseases (I think) to be able to diagnose. They need to be able to recognize them by some symptoms the patient can verbalize.

Accurate diagnosis is 90% of the POWER to heal.

If you look about yourself, most common ailments aren’t diagnosed at all… no one knows the cause… so they are, at the present time, are incurable.

The yet invisible dynamic is not revealed (or covered up in some cases), so there is not help available, the market is open to shysters, and crooks, and ‘energy healers’, and what have you.

I would say Robert Greene is like that… I am not saying he is my client… If he were he would already be a 1000, guaranteed.

Oops, so what about Forrest Gump?

He is practically an imbecile…

But you can tell what context he has for life… from his actions.

This is true everywhere… You can see the context if you have the distinctions down pat.

Forrest Gump, if he had the brain to consciously create a context, or speak a context, he lives inside a context: ‘do everything as well as possible‘

You see it from his actions.

So you may want to master some other distinctions, invisible dynamics before you attempt to master them.

Like you would go on daily hikes in your neighborhood tall mountain before you’d set out to climb the Matterhorn in the Alps (14,692 feet).

Oh, you think you know a lot because you can say the words? Or make believable sounds?

Anyway, if you EVER want to get ease and clarity in any area of your life, you may want to start to learn in earnest the 53 invisible dynamics.

Not just about them. Not just enough to be dangerous like Eddie Murphy in a conversation, but a ‘pussy’ in reality.

If you have NEVER taken the time to become fluid at something, you shouldn’t spend your hard earned money on that. How you do anything is how you do everything.

If you are a rank amateur in most things, you’ll bring the same ‘attitude’ to my work, and it won’t buy you anything… Guaranteed.

If there has been one area where you were willing to go deep, like languages, look what you did there… you have a flying chance to get good at my work too… but only if you bring the same attitude to it.

The attitude of Forrest Gump. I’ll do it as well as possible.

You can. And for a limited time you can use a half-off coupon. the coupon code is INVIS

It expires on December 15.

You can use both on the desktop and on my mobile app once you buy.

Get the 53 invisible dynamics at half price