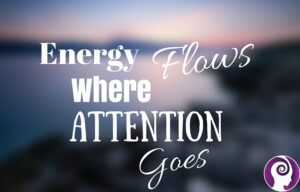 The question is: are YOU causing your attention? Are you causing what you want to cause?

I always thought I was curious, but I am finding out: you cannot be curious if you are not open.

One of the issues of my soulcorrection is not being open. Self-protection, personal-reality protection.

Looking back to my past… all the way back to 1966 when I went to architecture school up till almost today… I have been curious inside a tunnel, but protected myself from what was outside the tunnel.

When I was participating in Landmark, I didn’t want to hear about any other programs for fear that I would find out that I was in the wrong program…

About two weeks or so ago I signed up to one of my teachers’ Virtual Summit University and watched all the interviews that it entailed.

And had this feeling that ‘I could do this!‘ Interviewing people.

And the feeling also said: ‘I could be interested in what they have to say EVEN if I don’t agree with them. I could be curious, and put my distaste, put my self-righteousness aside, and be INTERESTED.‘

Something I have never done, never in my life.

Please remember that my soulcorrection is ‘Forget Thyself‘

The only way to have a good conversation, the only way to be interested in anyone or anything they have to say is by ‘forgetting myself‘.

What is insisting that I stay closed, not open, is the fear of losing myself, losing me…

…the art is to not drag myself, my opinions, into everything… To allow myself and my precious opinions to sit in the cloakroom… where I can pick them up when I want to pick them up.

OK, long story, but it was needed for background.

Yesterday or the day before I watched a video on Metamorphic, which is a coaching program by a dude who sent me an email with that video.

I checked, I obviously somehow I got on his email list about two years ago… I had never read any of his emails, and they were all in my inbox in the email I use to check people out, people I don’t intend yet to follow.

Most of my ‘valuable’ relationships have started in that inbox… the fake me box.

Anyway, I went and watched the video, because his subject line said: the most valuable video of 2021.

Like any shiny object junkie, I went and watched it. I was a little bit intrigued, enough to measure his vibration. 100. Ugh. He believes 100% in the law of attraction. He has a coaching program, where he promises what I promise, essentially.

But, remember, I had seen that I could be curious, and here was my opportunity to get curious. Leave my opinions at the door, and stop being so darn afraid to hear something different.

So when I got his next email today, I went and watched his sales video.

I listened till the end and felt pulled to apply to his program. He sold it well.

But I said: let me see what I can see AFTER I heard it all…

Can he actually deliver what he promises: A complete shift of the identity, so people can become their version 2.0, and start having more of what they want?

The answer Source gave me, through muscletesting (that is how we talk!), the answer to that question was yes/no

LEVEL ZERO is where you ask yourself: why did I sign up? What would I really want to GET out of this program? The answers come from the 1.0 version of you!

Then you start the process… that can take you to your 2.0 version.

You start with digging deep so that you hopefully get to the root of the 1.0 identity.

I call it the ditch, I forgot what he calls it. Landmark calls it your ‘case’. Or at least used to call it that. I haven’t set foot to anything in Landmark for a while.

Then the second phase is to set a new identity to step into, and do intentional actions, a lot, regularly, to anchor yourself in this new identity.

The new identity’s anchor is not the WHAT, it is the WHO and the HOW.

In my Hero program everyone has a WHAT to do. Depending on where they are in this process, they will do it the way they have always done things, or they will shift into the way the 2.0 version of them does things: with intention, causing, consciously, purposefully. Knowing that it is them causing, not the action. That the action cannot cause anything by itself.

As long as you look in the WHAT to give you what you want, you’ll stay in your 1.0 identity: being a taker, not a CAUSE.

OK. I see that I am muddying the water… I have mixed in my own stuff. Sorry.

So let’s separate the wheat from the chaff… no disparagement meant, honest.

Everything they do in the Metamorphic program, judging from what the dude says, is good, I don’t do much of anything different.

The problem I see is this: even if the process manages to shift people, it only shifts 10% of the participants, according to my muscletest. And even they didn’t really change inside… so you’ll need to feed the heat all the time.

If I turn off the heat in my apartment, the thermostat doesn’t matter… I manually turned the heat off.

The moment you don’t do the actions with intention, you return to your default 1.0 persona.

Unfortunately this is the same in my programs, unless.

What is this mystical ‘unless’ you ask?

It is the energetic component of my programs.

Now, confession time: I ask Source to activate a spiritual capacity, a dormant gene in your DNA… and that is the energetic component.

This is now your new thermostat setting, this new capacity. But it will not matter, unless you have the heat on… feed the heat. Have the furnace on.

And in my experience even 10% result is high without the energetic support. He picks his clients carefully. I haven’t…

The activated genes turn off if you don’t use them. They turn off when you act counter to what they enable to do. So for the past three months I have had to adjust and re-adjust people’s DNA… Do it day again and again, in and day out.

Hard work for me, not comparable results from clients. Spotty.

I tried the DNA adjustment remedy, but it turned out to only be able to keep the adjustment on. The moment it turned off, the remedy became ineffective.

I guess I needed to become desperate, like Korra in the Avatar: The Legend of Korra, when she lost her avatar capabilities.

She goes to the edge of the ice to grieve. As soon as the tear drop appears, the past avatars appear, and Avatar Aang presses his finger into her forehead and re-activates the avatar capabilities.

It happened to me… my power is turned on by Source… and the power of the DNA adjustment (5 genes) get turned back for people each time they play the new 14 second audio I made.

I have tested. It works.

The secret is to own that it is not Source alone that is doing it, it is also you, your intention to cause your own power that turns it back on.

And, of course, you need to recognize that your power turned off… or you won’t play the audio.

If I didn’t have a direct connection to Source, I would put the audio on my phone and like most people, I would never let it get further away from me than three feet… I would take it to the bathroom with me too… because I would never want to be without my power anywhere, any time.

All the people I expected to bid for the 14 second audio have bidded and I accepted their bid.

The lowest bid person is afraid to use it… I should have never accepted her low bid… she doesn’t care about herself enough. She cares more about what people think of her, than herself. Ugh.

I won’t make THAT mistake ever again.

Bidding remains open. Don’t expect me to sell the idea to you, I don’t need anyone who needs to be sold.

I recorded the screen of the video of the dude, Clark Kegley, to be respectful.

Why? Honestly, he explains the process better, although it is HIS process he explains… our overlap is only 10% but when did you get more out of anything than 10%?

Watch it. It’s educational. If you want his program, I am OK with that…

…I have an upcoming free workshop, smack in the middle of the holiday week, so maybe you’ll be off from work?

It’s 3 hours long, unless there are only a smattering of attendees, then it’s shorter by a little.

Be prepared to take a hard look at an area of life that isn’t to your high standards, where your results aren’t as good as you would like them.

I’ve used that exact workshop over the years to pull myself up by my bootstraps, from misery to doing life well…

Every time I attended I found something more to SHIFT… shift towards, or shift out of…

Not change… The more things change the more they remain the same.

Shift, instead… slide out of…

Clients who grasp the idea of shifting move rapidly. Clients who still think of  change, are stuck.

OK, here is the button to register in the workshop on the 29th.

Go to step 2. The workshop is not a sales pitch