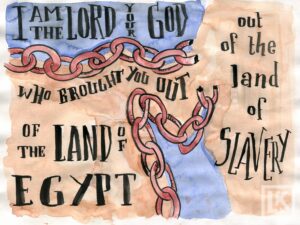 My new job is to take you, to lead you, to help you come out of the cave of the mind.

A prison break. Not unlike to the Exodus the Bible talks about: the Jews leaving the shadow world of Egypt for the Promised Land…

What is that cave? It is filled with words… filled with interpretation of facts, but it contains none of the facts.

It is a shadow world…

It is only as colorful as your language… not very. It has no time… no past, no future, no place to get to, nothing to achieve…

Contrary to what sages teach: it is always in the present seems forever, fretting from a future that is predicted by a past.

One could say that living in the mind you are mentally unhinged playing with your own poop. No, scratch that. Playing with the IDEA of your poop.

Why? Because intelligence needs to deal with facts, and there are no facts in the cave, only interpretations, meanings, stories. No facts. Not any.

So there cannot be intelligence either.

The mind, the cave of the mind is an impoverished world.

We are all born with the whole world available to us, but with self-imposed or accepted restriction, we gradually reduce our world to the size of a jail cell.

How do we do that?

By words. Our words and our caretakers’.

Here is what I read today in my horoscope:

…you have limitations.
And it’s important for you to identify them and take them into consideration.
But I want to make sure you realize you also have fake limitations; you wrongly believe in the truth of some supposed limitations that are, in fact, mostly illusory or imaginary.
Your job right now is to dismantle and dissolve those.
For inspiration, here’s advice from author Mignon McLaughlin: ‘Learning too soon our limitations, we never learn our powers.“

Freedom is recognizing your limitations…

I don’t know who said that, but I have found it true.

It says: don’t smash into them, don’t injure yourself. Limitations are good. Without limitations we are like a puddle of water… with limitation we are like a rapid… We can go somewhere. We have the energy and the direction.

Going somewhere, becoming, exploring, accomplishing are joy for a human, while being a puddle are slow dying of a human.

I read this story yesterday in Michael Senoff’s email:

One day a physical education teacher at Fairleigh Dickinson High School in Teaneck, NJ., was watching an intramural basketball game.

And he saw this kid playing basketball.

He could not shoot.

In fact, he didn’t do anything well other than dunk the basketball.

He could throw dunk

He could reverse dunk.

Even he could do a one-arm dunk.

Dunking was the kid’s thing.

After the game, a teacher had a conversation with The Kid.

Do you play any sports?’

‘No. I’m not good at basketball. I’m good at jumping. That’s the only thing I am good at.

‘Are you on the track team?’

The teacher said, ‘I want you to meet me in my office tomorrow.’

The next day Franklin went to the physical education teacher’s office, not quite knowing what to expect.

And the teacher introduced Franklin to the Fairleigh Dickinson University track coach.

Although that record has been since broken, one other record stands.

Franklin Jacobs remains in the Guinness Book of World Records for jumping the most inches over his height.

He jumped 23 inches higher than his height.

Franklin had the talent he didn’t even know he had.

And So Do YOU!

What is your talent?

It’s going to be hard reinventing your self.

It’s going to be challenging to change some of your habits.

And it’s going to seem strange at first learning something new you know nothing about.

But, being fruitful in new ways to come up with the money to keep the lights on, to pay the rent and to keep food on your family’s table does NOT have to be hard.

Now, why do I share this story with you? Because this kid, Franklin Jacobs had severe limitations… Most things sport he could not do… and it took an expert observer to find something good about him: he could jump and that jumping can be good for something.

Had he been good or decent in everything, he would have NEVER amounted to much. I guarantee it.

He would have been gray as a big gray bunny… No color… living a no color life.

So limitations are your friends…

I have some clients, ex clients to be exact, who had some serious one thing they were good at or at least showed promise at.

But instead of choosing that one thing, and considering all the other areas a restricted ‘no entry allowed area’, they remained dull, gray bunnies.

Your limitations are the guidance you have. They show you where to move…

When you try to do everything then you are going to be good at nothing. Guaranteed.

You can also look at the energetic restrictions as blessings and guidance.

They are, the energetic restrictions, potentially, gifts that keep on giving, even after I manage to pull the anchor.

Your doom tells you: you want to consider it a no entry field… and instead of circling the doom indefinitely, you can take off and swim away from it.

If you manage to re-calibrate your attention, if you re-calibrate your reticular activator (your heat seeking missile), to look for restrictions to consider guidance, you can start living a whole different life.

Hey, I am even including health problems, money problems in the restrictions!

What is a life worth living for me can be utter misery for you, and vice versa.

I had a miserable night last night. I was in and out of nightmarish worlds, and yet I didn’t want to get up.

It felt like a restriction, much like handcuffs. I used it to get glimpses into altered states, into the work of the Dark Side, into the nature of the mind. All new to me. And although I don’t understand yet what happened, I have started on that track.

But my job is to bring you out to reality where things are happening, where facts are instead of morphing vague shapes creating fear and anxiety…

But unless I understand what is happening to you, I can’t help you.

So having a series of bad nights… hey, I don’t mind. It’s all in a day’s work.

This afternoon, really lunch time, we’ll have a workshop, the first of many, to accomplish this never before feat: take you out of the cave… at least 30%.

Your personal reality, what you consider reality is a combination of facts from the actual reality and the interpretations from the cave.

Muscletest says that if you manage to squeeze into that personal reality 30% facts, you can actually become productive, self-sufficient, and intelligent, way above others, if that matters to you.

You may even become a winner.

So far no one has done it, while many have tried.

If you want to participate or get the recording of my first bumbling attempt, you can sign up now.

Hell, I will get better… but it will never be the first again.

Let’s see what we can do to set you free