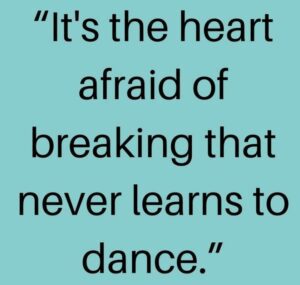 Maybe love is wanting even more for you than you want for yourself… but I am not sure about that.

Because of great love one is courageous. And coaching you is a lot like training tigers to act like pussycats… And as dangerous.

And occasionally this gets revealed somewhat late in the game… for both the client and the coach.

It is a heartbreak for the coach.

But what is really going on?

On the surface it is all going famously, until it doesn’t… 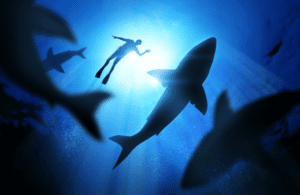 The lone swimmer doesn’t know about the sharks circling. He doesn’t know that he is going to be dinner… He is blissfully unaware that the question is not if he is dinner, but when. And which shark will take the first bite out of him.

And that is the problem with the human condition… not sharks, but shark-like inclinations that are at cross purposes with what the conscious person wants.

I teach many invisible dynamics in my 53 invisibles program, and there are more, more recently discovered dynamics.

The genes that get adjusted in the DNA adjustment, for example, reveal some that thus far have been invisible.

There are six genes involved in that adjustment.

that were supposed to, in normal society, turn off at toddler age… by the time the child goes to kindergarten.

But in today’s society parents make children dependent on them, teaching them that they are entitled to be done for, instead of doing for themselves. And expect the world to keep providing both the doing and the self-image the child made up…

Two genes. One about the doing, being self-sufficient, the other about the self-image.

It turns out that the association between the behavior and the gene is now anchored, and only energetic surgery can remove that association… and even when it is removed, the tendency of the child, living in their minds, is to behave as if that were the only way to be… dependent, and entitled.

In a world of adults a child who is a moocher or a looter doesn’t stand a chance of living a full life, the child can’t be fully realized.

The upbringing that most of us experience gives us mixed messages. On one hand encouraging, on the other hand severely limiting… confusing. So the child decides not to rock the boat, or alternately make the boat sink as often as they can. Both…

And like a pendulum, life alternates between extremes, while nothing gets done, nothing can get accomplished… All inside a narrow ditch, that goes so deep that the child and the grownup child cannot even see reality… the walls of the ditch are so high.

Is this all there is? is the experience… being stuck.

The power always with the other, with the circumstance, and never with you.

No matter how much you throw your weight around, no power. Only force. Forcing, defiance, resistance, lying, pretending, manipulating, but no power.

Without being able to see both the why of things you do and the process of things, the progression. If you don’t have this gene active, you’ll do the shotgun method… where no two actions are designed to build something. You are short sighted. Hooked on immediate gratification, never realizing that everything can build something… Some actions build what you want, others build what you don’t want.

But you cannot see the connection and thus the future and your life is out of your control.

this gene that allows you to take your eyes out of from behind your eyeballs and see what everything looks from a different vantage point.

A crucial capacity without which you are stuck in your self-concern, in your limited perspective, and stuck is stuck.

If you want to get unstuck, this is the crucial capacity. 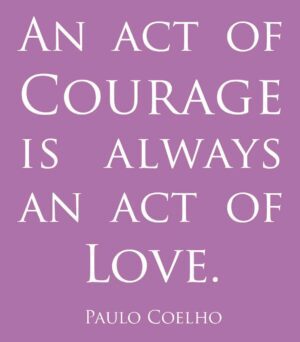 Because as a coach I am not able to cause you to get what you want, while you are diligently working against me, and at cross purposes.

I wish I could be a person who is left cool watching you self-destruct… because you do self-destruct. You know it and I know it.

This is a great video by one of my idols… Alex Hormozi where he addresses some of the way you self-limit, self-destruct. 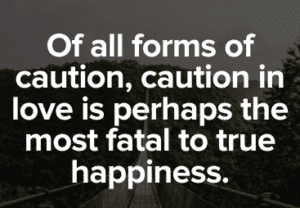 In the challenge I am preparing: I intend to take you to a place where you can get clear or clearer what it is you REALLY want. We are at the first step. It is due by Tuesday February 15, the assignment is to log all your activities so you can see what the picture shows: what you are up to in reality.

Even logging for three days you can start to see a pattern. The gap.

The gap between what you are really up to, and what you tell yourself you are up to will be revealed… to you. No need to send me your long list… You are the person who needs to see it.

This is everyone, by the way. No matter who you are looking at, their activity log reveals the gap between what they say they are up to and what they are really up to, documented.

The narrower the gap, the more productive, the happier they are.

So everyone benefits from the clarity that list gives them.

I’ll reveal the second part of the challenge on Tuesday. In that next step you can use your newfound clarity so you can either change what you tell yourself you are up to, or change what you do, so the gap can become smaller. 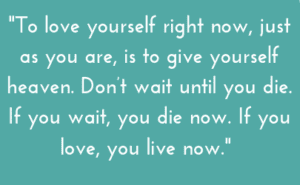 Your integrity, the relationship between your two selves is the most important factor to happiness in life.

Without integrity nothing works, not your health, not your money, not your relationships.

So doing something about raising your integrity level is crucial if you want to have a life that works, a life that you can love.

Email me if you want to be part of the challenge, or just do what you always do: do it in private: so you can deny what you saw. I am OK with that. Are you?

And if you want to understand this integrity thing… and how happiness and fulfillment, and everything depends on it, you can do the integrity workshop…