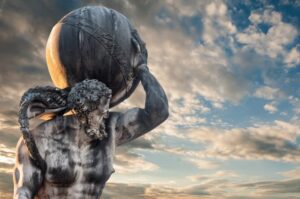 The book ‘The Art of Hunting Humans‘ calls them the Superiors.

The 1000 are the producers of the world… and believe it or not, they got there and stay there by CONSISTENTLY PRACTICING certain ways of being and behaving that are very different from how others behave.

According to muscletesting, they turned on the required genes by practicing those behaviors CONSISTENTLY.

The masses, you, the eight billion, would want someone to turn on the genes for them… but NEVER would consider that genes are not some fork or spoon. Some object lying about. and when you want to eat you can pick them up and use them… the capacities are not even visible, not obviously available unless you initiate the behavior to use them. You need to initiate… from some vision, or demand of yourself… Do you have any demands of yourself?

According to Alex Hormozi’s videos he is aware that without seeing nothing new can happen.

And he is also aware that without looking no seeing can happen, at least not consistently. Like one swallow doesn’t make a spring, a glimpse, won’t alter your behavior.

And without the discipline to consistently act on what you see… ditto.

The role of the environment

And what he also saw, through his own experience, personal and through people he coaches, that if you put yourself into an environment that is not conducive, does not agree, or even negate growth, or anything new, you’ll lose all your advantage, and pretty much everything you have ever achieved with the new faculties you created through consistent hard work.

This is why I warn people against ‘going home for the holidays’… or any gatherings that are like that.

One of the elements of growing is abandoning, leaving behind old beliefs that are kept in existence by speaking.

All beliefs are words… speaking.

The human condition, the condition of the talking monkey is that everything, or nearly everything is through language… for a human. 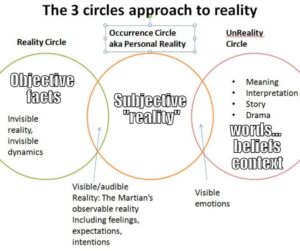 and that is true for everyone… that is the human condition…

Reality is all facts… The cave is all talking. The proportion of the two will give you what you produce results with, what you produce your life with. Some of my students have as little as 1% of their personal reality is facts.

This situation, the human condition, is getting worse worldwide… People see less and less facts, and more an more ‘narrative’ which is all talk.

2. The second part is made of some speaking. Words. Interpretations and the resulting beliefs. About yourself, and about the world.

Many of these words come from the people in your life… life now, or life before… They KNOW how you are… impatient, angry, hasty, someone who can’t do anything right.

And they keep on repeating those words… and unless you distance yourself from them, you are stuck with those beliefs about yourself.

Many more come from you. Yourself. Those are mainly the following myths:

I am
because
is

and your ubiquitous therefores: having to, needing to, wanting to, and should.

All word-created… not reality, not facts. Unreality. Lies. All seemings. All designed to keep you the same, complacent, sheeple, effect… never a cause.

The 1000, on the other hand are the people who were willing to look at all those assumptions and lies that make it impossible for a person to become a producer.

Producer is a category by Ayn Rand… it is not enough to produce something of value… being a producer is an almost god-like way of being: full ownership, creating, and mastering reality.

In the book Atlas Shrugged, two protagonists aren’t producers for most of the 1000-page book. Dagny Taggart, a railroad owner, and Hank Rearde… high producers on their own right, and yet not producers in Ayn Rand’s categorizing, where to be a producer means the person’s goal is his own happiness as the moral purpose of his life, with productive achievement as his noblest activity, and reason as his only absolute.

Only when they can let go of society’s interest as their primary moral purpose when they become a true producer.

Obviously society, made up of moochers and looters, protest to that… as a baby protests when you take away the nipple…

And the ones who are not part of the 1000 are the eight billion… Their I am, because and is… come, not from creation, but from what they can see… what they have always seen… Given by words. Words that they are small, puny, this way and that… not self-defined, not self-created.

So what am I trying to say here?

Before you can be helped by the energies, the DNA adjustment, the capacity activations, you already need to have been attempting, consistently, activating the capacities we are talking about. And for that you need to have some ambition to accomplish something that is only possible if you become bigger, more, better… a different person who can.

What do you see?

If you believe that the world is a magical place, and you can repeat to yourself ‘I am a millionaire‘ and that will eventually make you a millionaire, then that is what you’ll hear. And that is a heap of horse manure, my dear.

Affirmation don’t work unless you already believe them…

I was focusing my attention on my strengths instead of my neediness… I needed a job or I was going to be homeless.

No surprises there, I was hired immediately.

For my brilliance and for my willingness to be a contribution. They needed that.

For the past week or so I have been practicing who to be when I approach a person I want on my Virtual Summit.

I decided that being a fan, an admirer is a good way to be: the expert I want on my summit will love that.

But I didn’t say anything that was a lie: I just put my attention on seeing and saying what I liked, what I appreciated, what was unique about the other.

You’ll see this incongruity about yourself if you are in my new free challenge (Clarity) where that the first leg of the work is: jotting down everything you do in a day, for a week.

Unless you see that your aspirations are not evident in your daily actions, you won’t make any changes.

But without awareness nothing can ever change… you’ll get older but not wiser.

Alex Hormozi trained his attention. He even hired a coach specifically for that.

Is this why he is a millionaire soon to be billionaire and I am nowhere near that?

One of the things that hijacks your attention is the many things you do… what you say you need to do, want to do, should do…

And, of course, being inconsistent. Not getting up and being awake when other people are awake, so you are always interrupted for what they want. You don’t have any time, any energy to pay attention to what matters to you mooooos.

I have a client who set out to grow 1% a week. Doesn’t sound like much, but it is. It can result in almost doubling everything in a year’s time.

But to grow, you need time and energy to do that, exclusively. Not ‘by the way’… but just that… grow.

An hour a day should suffice… but unless you have an uninterrupted hour a day, where you are free, emotionally and physically free to work on growth… it is a pipe dream.

But she has two businesses, a family, and unless she creates an hour or two every single day for growth, she won’t grow 1% a week, she may even shrink.

Because that 1% is overall growth… Every area of life, including you personally, emotionally, intellectually, ambition, attention… EVERYTHING.

If it were easy, people would be growing like a weed… but have you noticed that they don’t?

Unless your environment is favorable to only do the only things that are yours to do… i.e. the 1-2-3 things, literally, you will struggle to keep your attention on what is yours to do…

One of the moves of the Integrity Workshop is to decide what is important to do. what you’ll actually do. instead of having long todo lists of what you could do, would do if you had the time, the money, the opportunity, but don’t do.

The goal is that you end up doing what is yours to do, what will take you to the result you committed to.

And the things you are not going to do can go to a list called ‘incompletions’ to revisit once a month, or so. And either taken out of existence, i.e. killing them, or schedule them, put them on your calendar to a specific day and time and do them.

It’s a fantastic course that has produced quite a few people who started to produce results for the first time in their lives.

Start your journey with the Integrity Workshop

I was 50 years old at the time. I decided to go for it. So I scheduled it. I practiced for it. And I did it. That is how I removed it from my Incomplete Cycles list…

Oh, and it was fun too. Once I got over feeling old and decrepit.