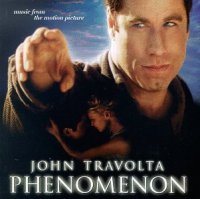 I am a movie buff.

When I was 19, question #40 was ‘movies’ on my high school final exam (in Hungary). I’d always loved movies but I didn’t think I could talk about movies in general, so the day before the oral exams I read a book by a Hungarian filmmaker on movie making. I pulled question #40 at the orals.

After 40 minutes the 3 examiners said that they loved what I said so much that they would want me to talk more, but there were other students waiting…

That statement made my relationship with movies even stronger.

I discovered that I paid attention to the tiny clues most people missed, details that showed depth where other people only saw stories.

I can say that my relationship with movies is very active… and nowadays Source picks the movies I watch, and I get my guidance through movies…

With that said, I watched a 15-year old movie, Phenomenon, last night.

It’s about this ordinary, slightly dumb but very likable guy. The only pub on the only street of his “town” celebrates his birthday. Drunk he walks out to the street, and sees a strong white light. It knocks him out for a few seconds.

By the time he gets back to the pub he wins a chess game without looking… fast transformation.

He is suddenly curious, he has a sudden quickening: goes from dull and shrinking, to sharp and expanding.

The “town” fear him and hate him. He makes them look bad. He speaks of stuff that is beyond them. They are only interested in the scandal part of the story.

Our hero suddenly understand that we are all vibration, we are all energy, and he has a co-creating relationship with stuff…

So far so good. I know exactly what they are talking about: this is how a “normal” human being looks when they are activated. Activated with the activators from the Creator, through me.

What comes after that really angered me. The film makers didn’t have the guts to just allow this guy to be who he could be: they had to find an explanation to what happened to him, and then kill him.

The story they are selling to you is that this guy had a tumor in his brain and that is what caused the quickening.

Being expanding is in your DNA, and once activated (some actions are necessary!) you can start to play with a full deck, and start on a path of winning, growing, feeling good about yourself, all the good stuff that is your birthright.

It’s not as fast as the movie makes you believe, but it works.

The first breakthroughs come in relationships. Why? Because that’s how life began, with relationships, and that is the area where we are most limited.

I have also experienced profound breakthroughs:

For quite a few weeks ego hasn’t said anything like that. And for someone who has struggled with ego all my life, this is the sweetest breakthrough.