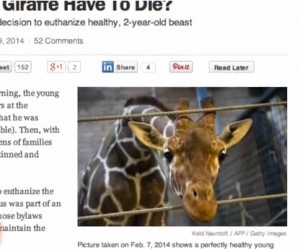 Copenhagen zoo refuses to hand over 18 month giraffe to other zoos, and kills giraffe and feeds it to other animals.

That is the news. Now, obviously, I am not in the popular news business, but without spending my time finding out what exactly happened, I may have some useful things to say to those readers that aspire to become a human being.

Watch the majority. The majority is always wrong. When they go left, go right.

When they are upset, be understanding. It is a much healthier emotion.

Consider that you can’t see the whole picture. Consider, that even if you could, wrong, bad, etc. are human constructs and they are cultural. Consider that God didn’t hire you to be the judge, so let go and don’t get involved.

Consider that emotional impact of rape that touches millions of people every day, with lasting consequences, and those don’t even make a ripple on the majority’s screen: they would have to look at themselves… and that they refuse to do.

Blaming, accusing, pointing fingers is easy. But looking at where you stand, how you allow it to happen, who you are that millions of people, men and women, adult and child get raped every day… it’s not pleasant, it is not easy.

Use this as a spiritual practice and your vibration will begin to rise, because the questions you ask are relevant.

You know, cultures that are closer to life don’t keep every deformed, terminally ill infant alive as a burden to society and family. They don’t keep people alive if they are ready to die.

Let’s allow a zoo make its own decisions, good or bad, so the zoo population can be healthy, and the lions and tigers can get a good meal as well.

Hate me? You are on the wrong website, bub.