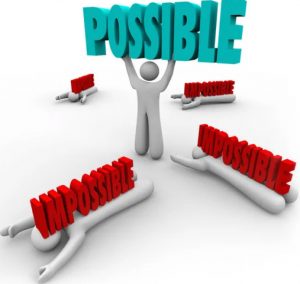 Note: this is a long article… and an article I’ll probably re-write, edit, until it will make sense to everyone… In the meantime it is what it is.

Humans are weird creatures. They will go for the impossible… and snub the possible.

Let’s distinguish possibility, shall we?

We’ll look at what it’s not… although in common parlance, this may not be as clear as it is to me.

Possibility is not an option that you can choose. An option of actions. Like instead of going left we’ll go right. Or instead of fried potatoes we’ll have some spinach, please.

Most of what people do is pick between options. They already exist, so you can just pick.

So possibility is not an option.

Where it points, what it says doesn’t already exist. The path to it is unknown, even if some other people have gone there before… but you have to find the way for yourself.

Possibility is also not what most people think it is: you can’t do many things well at the same time. People say: it’s possible that I could do this and I could do that… But because something is possible doesn’t make it a possibility.

Possibility has a requirement of a desired outcome, or it is not a possibility.

These actions lead to ineffectiveness, accidents, so although they are possible to do, they are not possibilities.

Is it something that you can say: I can, or I may?

Neither. Possibility only promises that if you find a way, a method, then the end result will be something new, and something spectacular… although yet just imagined. Unknown.

If you already have a picture of it, if you know how it looks, then it’s not a possibility. It is a dream. Or a fantasy.

Possibility is not available on the horizontal plane, the plane that is dominated by the mind, Tree of Knowledge, already knowing.

It is on another plane… a plane you know nothing about.

Everything I do, everything I attempt to lead you to, every energy I have created, takes you to the DOOR of possibility. Not through the door: to it.

Even when you do little things like inventing a purpose for your life. It is still just the door.

The door is open, but beyond it is the large unknown and you are pretty much on your own. Just like Israel was for me back in 1982.

I couldn’t imagine life there…

Purpose is one of the possibilities.

Guided by purpose is a possible way to live. To live midwifed by a purpose.

Inventing the purpose is like having sex… no commitment is required. But to have the baby, the life, it needs a midwife. And to bring it up to independence… needs a huge commitment.

The problem with humanity is with our vocabulary. we, like gurus, throw words around, ‘door’ type words with ease… Some people, a very few, go beyond the words, but even when they speak we hear the same old… They speak with their vocabulary and we hear with ours. Same words, totally different meaning.

Wittgenstein said: Whereof one cannot speak, thereof one must be silent.

The gurus, using ordinary language intending to explain what is not ordinary are like surgeons operating without washing their hands. Toxic.

We, humans, are talking monkeys… not more. We were meant to become more, but we got stuck.

Half of our vocabulary means nothing to us, they are just empty and meaningless sounds, designed to impress.

I promise you have no idea what awareness means.

Huh? Yeah, you have no clue.

An animal has more awareness than you. An animal knows how to just look.

You are too busy to do what you always do. Be busy. In your head.

When you do exercises, any exercise, you are ‘blasting a path’ potentially to the beyond. All exercises are like that, but especially physical exercises.

A stationary bike will not take you anywhere, and yet you are pushing those pedals as if they were. You are attempting the impossible… in a way.

What are you doing?

If you were aware, you’d know that you are training yourself to go beyond where lame-ass living wants you.

You are training yourself to get stronger, to get more endurance, to do what will make it possible for you to go through the door towards a possibility.

But if you looked into people’s head, if you listened to what they say they are doing, they say: I am trying to get fit… for what? I am trying to lose weight… who gives a flying fig? No rhyme, no purpose, no future. You are all about having… All ‘having’ is impermanent, and nothing is about what is worth moving towards.

A whole bunch of people, eight billion strong, going nowhere. No meaning, no purpose, stationary, like the bike.

Osho talks about impossibility in his Mustard Seed book, a book I hate, but that is neither here nor there.

He quotes from the ‘gospel of Thomas’ which is either original or not… who knows?

It is said there:

It could be a useful warning for today’s multitasking human…

The part about mounting two horses: you should consider that obvious, but of course you don’t. You multitask… and create an ineffective life.

You can take a word from the bible and another from a curse, and put them together… and we do that, don’t we?

I don’t know what I am saying, because I live in reality. And in reality none of those words mean anything.

But I heard my brother curse and I cringed. In Hungary, judging from my reaction, I lived in the mind where it was all literal and gross.

It really showed me the two places a person can live: In reality vs. In the mind.

Could I have moved to live in reality hadn’t I moved from Hungary to Israel and from Israel to the United States?

I muscletest: and Source says ‘no’.

And although I have the same number of words in my vocabulary in Hungarian and in English, my relationship to the Hungarian words is emotional. They make my stomach tighten, make me elated, they make all kinds of reactions… the English words don’t make me emotional.

In Hungarian I lived in the Valley of the Shadow of Death… There are no being words in Hungarian I even know to use, and for sure saying those words don’t bring about the beingness the same way as an English beingness word does.

In Hungarian I am nothing special…

One more thing. You know I am training people to activate intention for themselves and their lives. I just looked up the Hungarian word for intention. and it was very enlightening… It means to ‘endeavor’ which, in my feelings, is a much better word…

Most English speaker uses want and intend as interchangeable. But they are not if you consider the intend means endeavor… go for it, struggle for it, do it… not just think about it.

The way English speakers have intention, they don’t see themselves go beyond the idea.

The intention I am teaching is to ‘endeavor’… go and do what it takes, even if you don’t know ahead of time what it will take.

Before I sat down to write this article, I saw that there are two kinds of people in the world:

And or course there are people who have both ways, a little bit.

Can the leopard change its spots? No.

Can you change what you use to motivate yourself? Yes.

But, you see, if life is comfortable for you, if you live in the mind, if your vocabulary’s accuracy stays low, if you try to be someone who you are not ‘designed’ to be, you’ll be stuck forever.

When you live in reality everything is a guidance in one way or another.

I am a jump horse… in that analogy.

One of my long time clients must have been thinking he is a jump horse… so he’s been buying programs to accomplish big things. Programs that are the equivalent of a gate, or whatever they call those thing horses jump over in the horse-world. But this client is a trail horse… not bred for jumping.

If you start with your strengths, you can make them superpowers. And be happy, accomplished, realized.

Don’t look at how other people are… look at YOURSELF, and assess your strengths.

You can become the best at anything, if that is what you want, as long as that anything is built on your strengths.

And, of course, becoming the best at anything is a possibility. No one can foresee where it leads to or how it will look. For each individual it is different.

Most of my clients are on the wrong path… they want to become someone they are not.

And that, my dear reader, is impossible.

The Prison Break has its last session this coming week.

…so you can put all your efforts into a path that will go somewhere, instead of going nowhere.

OK, so for now I am going to let you review all the stuff I have about finding your strengths and using them to build a life you can love.

When you sign up to may email list, I’ll instantly send you the link to get the video…

I’ve put it on a page, that will eventually have everything I am willing to give you on finding your strengths and building on them to build a life you can love.