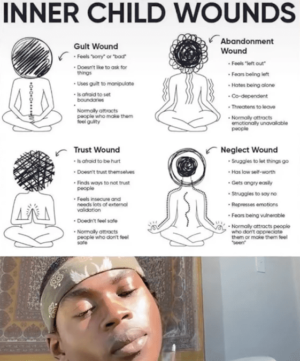 A whole new question is emerging.

Why do you do all the things you do to get better, or more, or different?

Are you doing it to fix something that you consider wrong? To compensate for it?

Or you are doing it to be liked? Well thought of? To belong? To become famous?

Or to make sure you are as good in the eyes of others as you are in your own?

I say: do it for yourself. For your own sake. 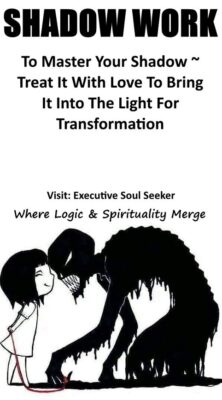 My way to deal with fear was to redirect my energies… Redirect them to discovery, research. To going where I had no idea what I was going to find. The unknown… the unknown and unknowable that justified my fear.

As a child I climbed trees, competed in different sports, learned to do whatever I could learn to do… Cooking, musical instruments, sports, photography, physics, sewing, wood work. Anything to keep myself from being in my body and to feel the irrational fear. Instead I chose to be afraid from something I could name… like the unknown.

All that doing just to make sense of what I was feeling was ultimately instrumental to me. Instrumental to being able to make a living anywhere… And eventually to becoming good at many things and finally uniquely good at one thing. 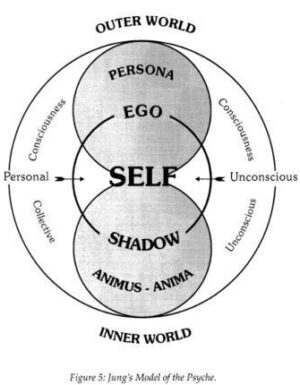 My access to life is kinesthetic… touch, movement, feelings.

When my hands aren’t on the keyboard, I am noticing, I am wringing them… When I go to bed, my hands are still busy… and until I can force them to not move, I can’t fall asleep.

I don’t know what I would be good at if I hadn’t been born an empath. I wonder what would fly the spirit in me.

My father wrote, and he taught. He was quite professorial. The deep thinking wanting to be expressed.

I never heard him have a mundane conversation. Ever.

He got up early, and made breakfast and shined everyone’s shoes… He, I think, also dealt with the demons inside by keeping himself occupied.

What demons? you ask. The human demons everyone deals with.

If you don’t know what I am talking about, then you probably deal with the ‘DEMONS’ by lying, or some other substitutive stuff… 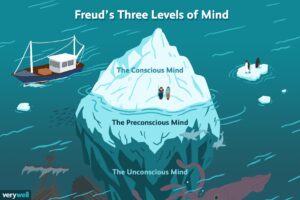 Like Freud said: ‘Life, as we find it, is too hard for us; it brings us too many pains, disappointments and impossible tasks. In order to bear it we cannot dispense with palliative measures…

There are perhaps three such measures: powerful deflections, which cause us to make light of our misery; substitutive satisfactions, which diminish it; and intoxicating substances, which make us insensible to it.‘

You may want to know the source of your misery and you may not. I prefer to know… because then I can go back and revisit it and re-constextualize it…

Then I can look again from a different angle. Or look through a distinction, a filter, a frame? Either way, the misery either disappears or gets deeper, depending on how you looked.

But no matter what is the source, what is the particular flavor of your misery, you are doing something to dull the pain, the misery. And, I say that it is very likely that your bliss is at the exact same place as your misery.

You don’t want to fix the misery. If the spirit is right there… then fixing the misery would also kill the spirit.

I can see quite a few people who kill the spirit this way.

And between you and me: living without spirit doesn’t seem to have helped them.

Werner Erhard used to say: if you peel a person like an onion, layer by layer, you’ll find at the core the desire to have mattered. He is talking about the desire to feel that you have been born for a purpose, not like an accident or a mistake.

If and when this desire for significance is blocked, thwarted, either by you, or by others, you have two paths in front of you: become a teenager forever… or become a criminal. 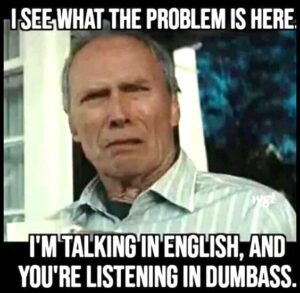 I say YOU, even though you think it’s others.

I am looking at one particular client to see what he has been doing.

If my interpretation is correct, he is trying to fix something about the world, without attending to himself.

If he were willing to consider that there is nothing wrong with the world… as Jim Rohn famously said: don’t wish for it to be easier. Wish for you to be stronger.

The ‘solution’ that works is to point your fingers at yourself and look. What is it that you have power over, and work on that.

There is nothing wrong with you, and yet you are weak, incurious, hesitant, inattentive, etc.

If all your efforts are about hiding, fixing what you say is wrong, lying about it, or pretending… you are putting your energies at what you have no power over. And you end up empty handed. 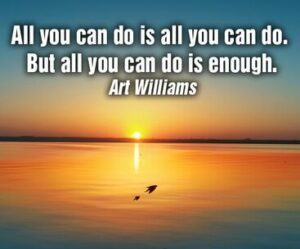 How? You just include it. Allow it to be the way it is. You take it with you on the journey that you choose to fly the spirit. Include the fear, the feeling of being slighted, the resentment, or whatever it is that you are trying to lie about, do away with. What is there. 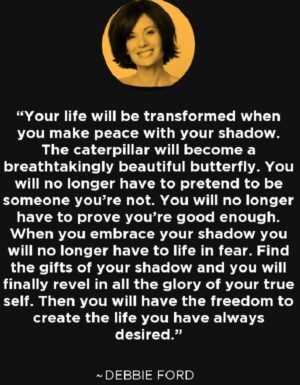 There was a woman, Debbie Ford, now dead, who said that your shadow is your superpower… I am finding out, it was Carl Jung who first said that. But no matter who said that, it is necessarily so…

Your shadow is at the same exact place as your spirit. The brighter the light the darker the shadow it casts. So the shadow won’t disappear… No matter what you do! But if you can own, accept, have room for your shadow, then the spirit (the light) has room to fly.

So albeit the shadow is painful, you may WANT TO find out what exactly is your shadow…

Mine is fear and anger.

I have two clients whose shadow is being floppy. Flip-floppy. Rag-doll. 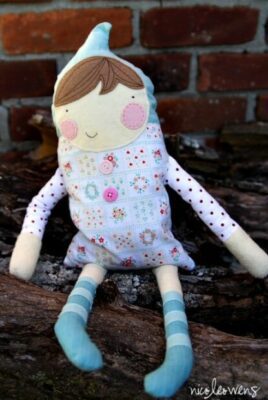 I had a rag doll. That was the only toy I had until my mother bought me a real doll at around age seven.

I abused that rag doll. Yes, I beat it. I gave it what I’d got. And the doll, just like me, took it like a champ. Never complained, never cried.

It knew that all abuse is skin deep. It seemed to have a solid core: a Self. An unchanging and unchangeable core, so it wasn’t concerned with anything outside of it. 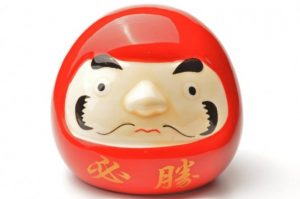 My rag doll didn’t know what that solid core was… and it wasn’t concerned. It had a trust, a faith, that the solid core will, like a keel on a boat, or the weight in the Daruma doll will always help it land on its feet.

And because of that core, or keel, it is not afraid of making choices… because all choices are good… no ‘wrong’ choices.

And once a ragdoll gets that… he is free to fly, free to dance, free to be in the world.

You don’t have to know your core… it is just idle curiosity. Certainty is a myth… and therefore you can’t find it… So make it your core… And keep it certain.

You need to know that you have it… a core, and that it will straighten you out if you get into confusion or trouble.

I have that. I have a certainty that no matter what I’ll do, I’ll be able to handle it. My favorite saying about that is: it’s never been that I haven’t handled what was happening… so I will handle whatever will happen. However I’ll handle it.

And this includes everything. Failure, shame, hunger, death. Everything. Even being kicked out. Or being duped. Or being used. Or being condescended upon.

But knowing what you instinctively do to fly the spirit: that is an important thing to observe and nurture.

One of my clients makes exquisite craft with paper, scissors, and glue. Everywhere else he is dutiful. The spirit flies with her craft.

So, naturally the question arises: how you fly the spirit?

This question cannot be really addressed without looking at where the shadow is the darkest. That is what will clue us in where the spirit is languishing.

Yesterday in the new ‘Find your Self‘ (I haven’t quite decided what to call the program yet) program we did an exercise that I had not done with students before. And to my utter surprise and delight it shed some light deeper… so today I will repeat it.

The Find your Self (or whatever I am going to call it) program first deals with the Shadow. The shadow you compensate for. It is a long program, and intense.

Three 1-hour sessions a week. Even though yesterday we were on the call for two hours… but I want these calls short and sweet in the future.

It needs the Intention energy activated, because without it even if you see something, you’ll deny it. Yeah.

If you want to be part of the program, dirt cheap, I have room for two-three more people.

The purpose is to unstuck you… so you can actually evolve as a person, instead of shrinking.

I’ll have a private conversation with you to see if you are up to something or not. If you are not, I won’t take you. You won’t do the work, because you have no reason to.