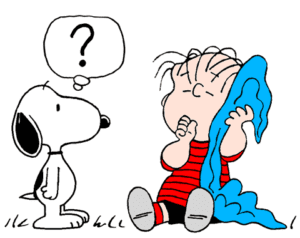 My younger brother, is six years my junior. So I was able to observe him growing up.

His first word was khao… the name of his security blanket. Tattered, pink and blue… and he never let it go until he was 10. Blanket is takaro in Hungarian…

He also had code words for other things. My older brother was duyi, and I was uyi… Make sense, right? It is not what other people call things that is their name, it is what YOU call them.

It bothered me that I didn’t have an independent existence from my older brother for my little brother. 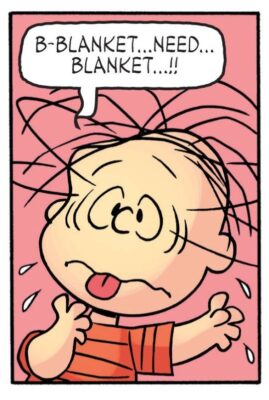 In this article I want to talk about your security blanket that is a lot more than just a piece of fabric.

If humans can’t see the world without words, if humans see the world through words, then words are very important. And they are also our tools to change the world… so we can change our behavior, and ultimately our life experience.

And this is where ‘security blanket’ comes in as the Opponent… opposing change, opposing growth. Even if the situation is going from miserable, powerless, cowardly, to joyful, powerful and confident.

The question, the most important question is: do you? Do you care enough to do what you need to do to have that. Clear skies, confidence, joy. 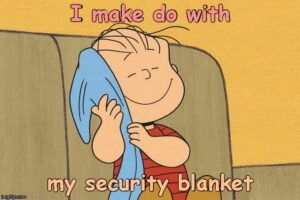 The name ‘security blanket’ gives it away: the known, the familiar, even if it is miserable, is less threatening than the new and wonderful.

‘Better the devil you know than the devil you don’t’ is what we are talking about… human’s unwillingness to take risks, any risk.

In the book ‘Flowers for Algernon’ also a movie Charly the main character, Charly is willing to take the leap. I promise no one who watched the movie noticed that. Because not being willing to grow is hidden from everyone’s view… except from the person who wants you to grow. 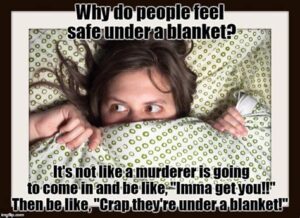 I meet those puzzling sentiments day in and day out: why am I unwilling to grow? says the feeling… No one has ever actually verbalized it to me…

One day some 20 years ago I saw two posters in a chiropractor’s waiting room. One filled me with disgust. The other lifted up my spirits.

The one that disgusted me:

That one said: ‘Keep your face to the sunshine and you cannot see the shadow. It’s what sunflowers do’

What it encourages is horrific. ‘The only thing necessary for the triumph of evil is that good men should do nothing‘

And if you look, (if you don’t even look, you don’t see!) evil is triumphing again.

The one that inspired me

It is a moment to moment decision… that most people never make.

Humanity as a whole has courage deficiency…

To change, to be willing to step out of who you have been into who you want to become, you need to have the mental fortitude, toughness to step into uncertainty. 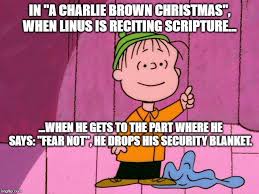 To leave the security blanket, your blankie, behind.

Can courage level be measured?

Is it worth measuring? Source says ‘no’. Why? Because the only courage that matters is the courage I am talking about… stepping into the unknown.

Can that be measured? Yeah.

Why one is worth to measure and the other isn’t?

The difference between courage and courage is what one risks.

The courage it takes to grow is called existential courage.

There is a book called that… Its subtitle says: The antidote to the comfortable coma. Now suddenly you can see it, if you realize that you are in a comfortable coma… can you?

That book and its author is proof positive that talking about something and being something are not connected: the author’s vibration is 100… no existential courage is possible there.

If you can indulge me and go back to the Freud quote AGAIN grrr? lol

‘Life, as we find it, is too hard for us; it brings us too many pains, disappointments and impossible tasks. In order to bear it we cannot dispense with palliative measures… There are perhaps three such measures: powerful deflections, which cause us to make light of our misery; substitutive satisfactions, which diminish it; and intoxicating substances, which make us insensible to it.’ 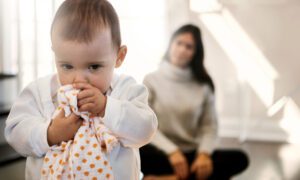 You can find how YOU put yourself into a comfortable coma.

Interestingly being a campaigner, being an activist takes no existential courage. It is still the same coma…

I have that courage in spades…. Why? I guess I have built up to it… through always living on the edge… by choice, even though I was unaware of it being my choice.

So during the decades that I made my changing myself, and yes, decades, I took feedback and used it to turn myself around a tiny bit.

Trimtabbing is the only way to change yourself, by the way.

The common religious and fake methodologies where you wave a magic wand and it changes you all at once are just that: fake.

If it were possible, it would be exactly as scary as you imagine it… and deadly.

What people I coach aren’t able or aren’t willing to see is that it is really a tiny bit to tiny bit process. Like Kaizen.

You can’t change what you can’t see… so the first step, every time, each time, each phase, is to see what is there that makes you and your life stuck.

Your stuck state has a linchpin, always. 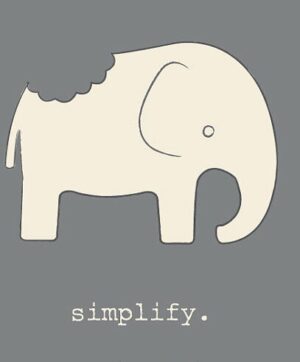 One of my students has a linchpin that says: ‘I need to know the answer.‘ It is as big and as sturdy, albeit stupid, as an elephant. Sorry elephants, I didn’t mean to say that you are stupid. Needing to know the answer is stupid.

And yet, just like you eat an elephant, you do it one bite at a time. You prove it to yourself that even if you don’t know the answer, no judge and jury will condemn you to death. You can make mistakes and it won’t kill you.

The more mistakes you make, tiny mistakes, the more you erode that linchpin… and at some point it will fall away.

And you’ll find yourself in a new comfortable coma position where the next linchpin, likely be: ‘I don’t know what I want…’ and you can do the same ‘poking the box’ method to prove that even if you don’t know what you want, you can try out new things, and maybe even take them to a place where it becomes enjoyable. 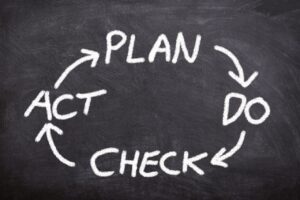 Once you have a sense of what you enjoy, you’ll know what you want… and guess what… you’ll find yourself in the next comfortable coma… with a new linchpin.

This is why it took me decades…

You are in a better position than I was. The methodology wasn’t set… so I would have had to invent it myself… and I am no inventor. So I stumbled on it. The iterative method… That is another name for the trimtabbing, the Kaizen, the small steps method.

You move to a direction and don’t move again, until you’ve tested out the new state… got feedback from life, from others… and then look what you can add, take away, change…

It is called iterative… you get to the ‘end result’ through iterations. 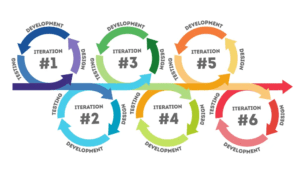 My training as an architect was an iterative method training… three times a week the plan was corrected, nudged, changed, improved… until the end of the semester…

Slightly nerve wrecking, because every iteration looked perfect to my beginner eyes, and I had to let it go so it can get better.

Did every student in my class have it? I just looked, and none of them did…

By the way iteration is from mathematics… of which we had an awful lot in architecture school. And I loved math. 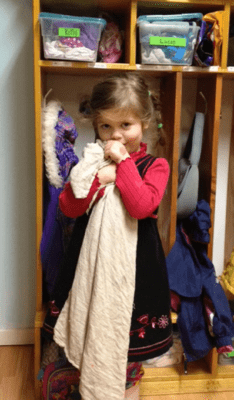 So back to the ‘security blanket’ that could also be called ‘attachment behavior’ where you are attached to some ‘truth’ or rules, or morals, or shoulds, or wrongs that need to be fixed…

Unless you map out what constitutes your world, the backdrop, and pick one thing you consider the linchpin, or pick one thing you see that you can let go of, you’ll be stuck in the comfortable coma… like the other eight billion are.

There are 1000 men and women who have gotten where they are through existential courage and the iterative method.

A turning point can be thrown at you… like losing a limb, or having a brain enhancing process, like in the movie Charly.

And to everyone’s surprise: people remain the same… unless it was them who summoned the courage and took the step.

I once had a t-shirt I had custom made. It said: Fear is an opportunity to summon courage.

To everyone around me I looked fearless. But I have fear like everyone else… strong demanding fear. But I don’t consider it guidance.

I say: if you are not willing to die for a better future you won’t have it. Existential means: you are risking life, you are risking dying. Your ego, your self-image, your delusions, your comfort… dying them.

Once you start in earnest, the spirit in you will start to help you. But in the beginning it is all up to you.

The more dutiful you are, by the way, the less courage you have available…

In tomorrow’s free Office Hours call we’ll look at ‘active’ language and see how you can use it to embark on an iterative journey of becoming all you can become.

Even if your level of existential courage is low or zero, you can start ‘poking the box’.

This is not the first time I’ll be teaching this method, by the way.

In the last session of last year’s Integrity Course I accidentally taught it… I even surprised myself.

Want to get the recording of that?

Without courage there is no integrity. Without integrity courage won’t matter.
You have some options in the shopping cart… so pay attention. Pick what you want and willing to do the work on.

Some ladder quotes for you:

this is an important step, although what I taught yesterday in the ‘Intention to Self’ program, to look from the side, is more important… otherwise you may forget what you are up to, your why.

The rung of a ladder was never meant to rest upon, but only to hold a man’s foot long enough to enable him to put the other somewhat higher.

Hell, this was a guiding light for me more than once in my life… occupations, relationships, books I was writing… A lifesaver.