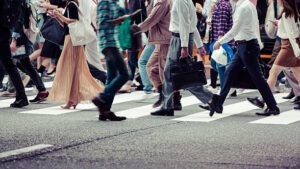 And you act consistent with what you see from where you look from. From the basement, from the street level, the second floor, the penthouse level. 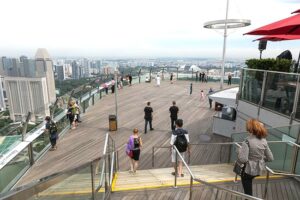 And it is true… vibration shows from where your actions are coming from, what view.

But you could view from the penthouse, but act from the basement… If you don’t believe what you see… Or you don’t think it matters. Because you ‘know better’.

So the definition, talking about vibration, is not complete… It would be more useful to distinguish it… but I am not quite there yet.

So in this article I will look at it from another angle… and we’ll see what we can see from there.

Homo Sapiens vs Human Being

The fundamental difference between a homo sapiens… the evolutionary level where humanity is at, and human being, the next one, is their access to beingness.

A human being can create their beingness at will…

Homo sapiens can only feel or be something that was created by something other than themselves. They have no causal relationship to their feelings or beingness.

Yesterday, in an exercise, I asked the participants to place themselves in an incident they had in the past and feel what they felt then and see what they saw.

None of them could. None.

I, on the other hand had no problem putting myself into the beingness of each participant, one after the other… and see the world through their eyes.

Real empathy doesn’t exist until a person climbed to 600 vibration…  I totally didn’t know this until that failed exercise yesterday.

I say it is causing. The capacity to cause… Anything.

And although I turn that capacity on in the DNA at the beginning of every call, it is, like a musical instrument, It needs mastery, a level of mastery from you to create beingness, aka music.

And like with everything, unless the price you pay is less than the rewards you hope to get, you won’t pay the price.

I have shared that I am ‘told’ that when I die I’ll join a group of dead people who are working on the improved design of humans so the next humanity can reach human being level. Not this one, the next one. The current humanity is humanity #6.

I am ‘told’ that my father is part of the group and can’t wait to see me. lol.

I have been pondering what expertise my father brings to the table. He was an economist. He, with two other dudes, designed the ‘new economy’ for Hungary in 1968, I think. I was in architecture school, and I never benefited.

As you know Hungary was a socialist/communist country. That means that the state owned most of the businesses, and the pay didn’t depend on performance, because the companies weren’t making their own money, they made or lost money for the state.

This ‘new economy’ was built on recognizing  human nature, on recognizing human stinginess: I will only do as little I can for what I can get… But if I am promised more: I may do more.

That is homo sapiens… but I think even human being will be selfish, so their reward will matter. That is where my father’s expertise can come in.

Looking through this reward/attitude vantage point, I see that there will be levels of beingness even on the evolutionary level of human being.

Homo sapiens is not interested in intrinsic value for its own sake.

But I think even human beings will be measured by to what degree they’ll value inner values for their own sake… So human being will have almost as much room to grow as homo sapiens.

Now back to vibration and what it means.

One tool that can take one all the way to human being level is communication.

The power of your word. WORD. Used like a musical instrument.

Word, where you are the cause. Where you wield it as a power tool.

Why having access to power won’t necessarily raise your vibration?

Language, active language can cause. Cause good or cause bad… but it always causes. You can use it like you use a knife.

This explains a lot of gurus’ low vibration: they may be causing but not Life. And likely they are not in sync with Life… they are on their own side… ‘desire to receive for the self alone‘ at the expense of their followers. Using them.

A number of years ago I had lunch with a fearsome seminar leader. She was telling me that she was considering quitting.

Because bad people, corporations, use the power we teach to bad… not the good it was intended.

Because having access to this immense power of creation will help bad people do more bad things to more people. Doing even worse things… doing even more against Life. Like Monsanto. Like the whole military/industrial complex… as they call the bad people who run the world.

But it is true for the ‘education’, medical, legal, lawmaker ‘complex’ as well. All are working, steadily and consistently against Life.

Same thing as with gurus. If these people, these companies told truthfully to the billions of people they abuse, use, people would stop buying the harmful stuff, harmful ideas they are sold.

I am on the side of life… and this always fills me with grief.

I often think of one of my favorite Hungarian poems. Here is my freestyle translation…

No one wants what I have…
No one wants me.
So I don’t have a choice…
I’ll sell my life to the devil.
I’ll rob, I’ll steal, I may even kill if I need to.
And I’ll be caught, I’ll be hanged, and I’ll buried.
And the grass that grows
out of my beautiful heart
will bring death to all.
My beautiful heart… that no one wanted.

I’ve always resonated. No one wanted my beautiful heart either.

What I have had is choice…

Power has no direction. It can kill or it can cause life. It’s a matter of choice where it goes.

When Jozsef Attila wrote those bitter words, his vibration was 100… He was on the side of death, bitter and angry.

If your vibration is that low I won’t commit to train you. You don’t have access to integrity, and to causing. You need to have at least 200 vibration for that.

Can I train YOU? Train you to wield the power of Word? To cause things happen with your Word?

The stronger the relationship between you and your word, the higher your integrity is, the more trainable you are.

The more you are defined by, the more your actions come from what is outside of Self, the less integrity you have. You are reactive, and you probably cannot be trained until you work on raising your integrity, the connection between you and your word.

Now, most people have no idea what integrity is, and therefore they think they can be trained. But to be trained it doesn’t matter what you think, it only matters who you are and what you do.

There is a near unbridgeable gap between your intention, your word and your actions. The bridge is your integrity.

No bridge, no action.

Focus on integrity, building integrity. Don’t EVER assume it is enough.

Build a bridge to success
And to give your integrity building a boost… sign up to the Communication group… and learn stuff I don’t teach anywhere else, get access to audios, videos that if you bought them anywhere, you’d pay hundreds of dollars for it…

I’ll consider that group, and only that group for any future courses…