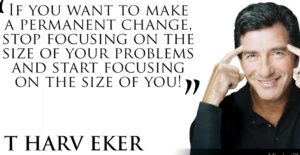 Most people who come to my site want more money. And they want to, maybe, change their inner money game, but there is no such thing.

Unfortunately working on what you want to change is an ineffective approach to changing it. Working on a relationship never worked. for example.

But if you look at the principle… how you do anything is how you do everything, then you can see that you can work on the how of anything and it will effect the ‘how’ of everything.

How you do relationships is how you do money… most of the time, it’s an ugh…

It’s automatic and largely outside of your conscious control.

Money is only one area of life. There are many… and working directly on what you want to increase may be a mistake.

When authorities wanted to reduce crime in NYC in the 80’s, they attended to orderliness and cleanliness, not to crime. It did a good job, they say.

When they built sanitation in London the health of people rose.

So if you want to increase your ability to make more money, you may need to attend to other areas.

The connection between areas is not in the visible. It is on the root level, like sequoias are completely interconnected below the surface and are a unit, like a human.

The connectors are attitude, context, filter, sentence, and the hidden agenda. Maybe more, we’ll just deal with these for now.

All of these are words. Not words that describe them: there you may be completely off, completely misunderstanding or mislabeling things.

Instead we’ll look at the backdrop that has all the words the give rise to attitude, context, filter, sentence and the hidden agenda.

The words, the sentences in the backdrop are your world-view, including your self-view. You can call it mindset, but I won’t. I think my words are better… and therefore your results will be better when we want to change your attitude or behavior.

Attitude is not a very expressive word, and I didn’t get the hang of it until I looked what the word is in Hungarian, my mother tongue.

In Hungarian the words ask: how you stand to it? what is in question? Standing to a person, to a thing to do, to a movement, to a future, to a thing.

The components are your body, the face, and the thing. Are they parallel, directly interfacing? Or are you turning away from it just enough that you can still pretend with one hand to do what there is to do?

Are you turning your back to it? Are you urging it impatiently? Or maybe you are reaching out to it greedily?

Your face: are you expressing disgust, anger, reluctance, fear, being dragged and forced, resignation, superiority, self-pity, or love and cooperation? Maybe eagerness?

All this is expressed in the words… that create the attitude.

‘I hate doing this but it has to get done! ahhhhh‘

I could have said ‘dutiful’ but you wouldn’t see the movie of the action, the body position, the face… because you need to hear the words that are spoken in the head to fully appreciate the state of being.

If you wanted to increase your emotional intelligence, you could experiment with different paces and body positions and find the sentence that is underneath them.

Higher emotional intelligence people can pinpoint the attitudes of people around them and can address and successfully interact with them… as opposed to emotionally blind people who always bumble and are inept.

When you know what someone’s attitude is, you can see that what they do has nothing to do with you, it is all them. And you can now stop fretting about yourself, and can go on about your day.

If and when you don’t, you are bothered. You fight windmills. You fret. And, or course you make wrong moves.

So start practicing. Or if you need to: start learning. How? Where? I don’t know. Maybe I’ll do a class on that…

So that was attitude.

Here is CONTEXT… as essential to emotional intelligence.

It has two parts: the default context… and the created context.

Unless you get conversant and fluent in seeing the default context, your created context will suck.

You’ll see that everyone and their brother try to do away with what is and make something new, the affirmation people, the meditation people, the attraction people, but they are ineffective. If for no other reason: you cannot sweep all dirt under the rug.

So the emphasis will be here again on what is… the context that keep you and your behavior the same.

So what is a context?

According to google: the circumstances that form the setting for an event, statement, or idea, and in terms of which it can be fully understood and assessed. And often the setting is the words that should have been said before what was actually said, so it makes sense.

Often people blurt out half sentences, considering the context obvious. At least in my classes… And then they are reluctant to speak it when I ask them.

That behavior is typical: everyone thinks, mistakenly, that everyone else knows what it is all about.

So we’ll look at context as ‘what it is all about’ because it will be more conversational.

Context, obviously, is words. Sometimes it is expressed in pictures, but humans cannot see anything unless they label it, so yeah… it is always words.

Emotionally not intelligent or not very intelligent people don’t… they don’t know there is a context, and they don’t understand why they are ineffective, why people don’t respect them, why their interactions with things or people go to sh!t.

And things to go sh!t… and it is often because of the lack of context, or the default context.

A person can have a default context to everything, every activity. It is attitude defining.

‘What it is all about’ can be diverse. Here are some examples: ‘I will want it really strongly and the result will show up’ is the attitude of one, maybe more than one of my students. Unfortunately I attract magical thinkers who think energies are magic.

As you can see attitude and context overlap, sometimes 100%.

A filter’s job is to disallow certain elements from going through, from being head or seen. This causes what the filter allows to be overwhelmingly strong in the perception.

The question that can drive up the filter is ‘what are you expecting?’ ‘What are you listening FOR?’

People have a favorite filter… Mine favorite used to be ‘I know and you don’t. Let me tell you…’

It didn’t make me very well loved… just the opposite.

If you dig deeper, you see that I was expecting people to be stupid, or dense, or ignorant. And I was never disappointed… What I never expected is people who think for themselves… And ditto. I was hardly ever disappointed. But more importantly: I was listening for an opportunity to be smarter, superior, and thus deserving to live. I was desperate for that. Because my filter says: I am not worth keeping.

And that takes us to our sentence and the hidden agenda.

The two, more often than not, are connected like Siamese twins.

The sentence is what you said as a conclusion of an upset. An upset that was as early as when you were three. Three years old.

It sounds like the sentence a judge would utter to send a person to jail, to death, to forced labor.

Mine is: I am not worth to keep. I am useless.

Life unfolds to prove the sentence. And it is always underneath the attitude, the filter, the context, and it fuels the agenda.

The agenda is always hidden. The agenda that is visible is a prop. A lie. A dummy.

And that leads to a distinction that I haven’t mentioned earlier but is important: the frame.

The frame is like a rectangle cut out of a sheet of paper so you can look through it. The name of the frame is written above the hole: this/that

Mine used to be smart/stupid.

You see everything in the context the frame gives you. good/bad, worthy/worthless, matter/doesn’t matter.

Nothing else can sneak into the frame, or if it does, you can’t see it, or you consider it irrelevant.

You can’t see 99% of what you could see if you didn’t look through that frame. You can’t see honesty, honor, dignity, courage, beauty, goodness, loyalty, etc. These are intrinsic values.

And surprisingly you cannot see any value. You can’t see because it doesn’t occur in your frame, tasty, or productive, or effort is good… because your eyes are only on what the frame says: either this or that.

If you have an I will/I won’t frame, the how cannot be seen by you. So courageous, consistent, purposeful won’t show up as possibilities in your frame.

And of course, it is the same for every filter… those won’t show up… and this is why you never amount to much… because those are the most important elements of success.

Remember we started this whole conversation stating that you want to be successful, financially for example.

But the words underneath the surface prevent you from doing what you need to do with the right attitude, or from mastering the skills you need to have for success.

So unless you develop the skill to know what is being said under the surface, you won’t be able to say something else to effectively change your chances for success.

All emotions are created by words… and unless you know the words intimately, the words that create ANY emotion, you are ineffective in life.

With money, with relationships, with your health, with fulfillment.

I teach these distinctions and many others in my 53 invisibles course.

It is a lot of videos…

A whole library of invisible dynamics
PS: here is a ‘bonus’ invisible.

Most people relate to life that life, people, actions SHOULD give them what they want. That they should be able to go and get what they want, unopposed by things, difficulty, or other people.

This SHOULD doesn’t want to go away.

It is invisible, and until you can see that there is that darn SHOULD there, like the truth, you won’t even consider managing it.

In the 54th invisible we take it back to an interesting place, that one would not suspect: child sexuality.