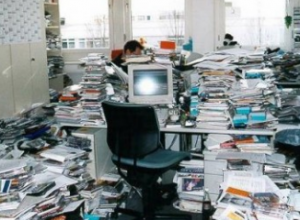 Procrastination is not an issue, it’s a symptom

As you may know, I am leading a twice a week course, called Daily Connection. There is no set curriculum: the goal is to peel away the not-you. The not-self. The false self. Just like Michelangelo chipped away what’s not David…

There are two approaches to coaching people to be their best:

As usual, the idea for the session this morning (classes are Mondays and Thursdays and are open to the public) came from one of the participants: procrastination.

I don’t have an issue with procrastination: I do things when I do them… what I care about, I do often. What I don’t, I do rarely.

But no matter what I did, I could not remember what the topic was, until I sat down by my computer to actually write the slides for the class. That got me curious.

I did some research. I was looking for connection between ADD and procrastination. Then I sat down and meditated.

Human being decided (in the Garden of Eden episode of the Bible) to get its own knowledge of life, make its own judgment: good or evil, and refuse to connect to Source to get guidance.

Every incident that happened since then was interpreted from the limited perspective of the human mind. From the framework of good or evil. Without any uncertainty, without ever questioning if the impression during the incident was accurate. Nope. None of that… no. The 3-year old was as sure as the 57-year old, and as wrong, as misguided, as inaccurate, and as damaging to itself.

Here is what I am saying: in every incident (really every minute of every day) something happens and then you say something about it.

Test this out: you get a bunch of flowers. The first thing you say: these are flowers. These need a vase. Where the heck is the vase. Blah Blah Blah. A whole big story from a simple act of someone bringing some flowers.

You are 7 years old. You raise your hand in class, and answer the question. And your answer was wrong. The children laugh at you. The story includes all the stuff you say about it. The shame. The regret. The decision to never do that again. The decision that maybe you are not as bright as you though you were. All that is in the story. But your story neve actually happened. Only the first part, the first 4 sentences. The rest is your take on it, from the limited perspective of the human mind, looking for the good and the evil. And have you noticed that you always find it?

And it’s invisible to you, because story for human being is like the water for the fish: what water? what story?

Maybe you see it when it’s someone else’s story, but surely you cannot see your own.

This is when procrastination comes to the rescue.

Rescue, you say? I did. I know, it does sound weird.

And if you can’t have power over anything you don’t catch, then you want to know what you are not seeing.

The story you made up when you were little is still running your life. Except that it doesn’t feel like a story, it feels like the truth.

The Dianetics people call it your engram. Landmark calls it your racket. I will call it your story, because I lack imagination.

Let’s see how your procrastination can show you (often) what was the exact story that you made up.

Let’s see how this play out in an example case: the person in this case is a male, and was about 4-5 years old at the time of the incident.

He lived in North Country. Very cold, lots of snow. He loved playing in the snow. It took quite a bit of time to get him dressed in all those layers of clothes, and almost as long to undress him.

While out, playing in the snow, he felt that he had to pee. He calculated that even if he manages to get to his house in time, he would never get out of his clothes and to the bathroom soon enough, so he decided to pee in his pants. His parents were mortified. He said he didn’t feel that he had to pee. He did this every day, all winter… His parents concluded that he wasn’t very bright.

Today he has a difficult time to have any bodily sensation and his opinion about himself is that he is not bright enough.

So, being my student, I ask him to go to his inner guidance system and feel if his decision would work for him or against him. He can’t do it. In addition to that he has a real hard time getting started on the project he has dreamed about for about 30 years: having a successful business.

The procrastination on that project lead us to the original decisions that he could not remember and he could not therefore tame.

Let’s see another example: this person is me. I only do laundry three times a year. Looking at the procrastination I found the early incident where I decided that I was treated the way I was treated because I was dirty. Today I have issues with my hygiene, my laundry, my house, anything that involves dirty or cleaning.

I told you these examples in a socially acceptable manner: the original incidents always involve some real emotionally jarring content… that’s why it’s so difficult to pin them down.

Once you have the original incident, it is relatively easy to use one of the 2-3 effective taming methods, so you can have anything you ever wanted, be anything, do anything, accomplish anything, without ever changing anything.

4 thoughts on “How Is Procrastination Helpful to You? Really Helpful! I am not Kidding! UPDATED”