Daylight savings time is just another way government and the powers that be indoctrinate you to cut yourself off from nature and follow the rule of the many.

Being cut off from your inner wisdom has come about gradually. Some were rules of your Mother… who didn’t know any better. Who was told that all humans were created equal… but your sense of language, your ability to think, don’t sufficiently distinguish between equal and same. It may be true that all humans deserve the same opportunities, the same treatment when they made a mistake, the same rights to do things. That is the meaning of equal. Pretty much the meaning of no prejudice can be justified…

But same means identical, and that is so far off the truth that it is staggering.

I was born prematurely with two pounds body weight. I had stomach and belly ache till about 6 months ago because I wanted to eat same as everyone else, and my body could not handle it. I need to eat differently. Not different things, but differently. No sandwiches, to stews, no soups for me. No vegetable medleys. Or I have to pay the price with belly ache.

John followed the wisdom that when you can, sleep… to make up for sleep deprivation. He is now struggling with low grade bipolar.

Your inner wisdom, the part of you that is suppressed by the “wisdom” of others, governments, parents, friends, newspapers, TV personalities, gurus, teachers, is the part of you that could keep you intelligent, and well, and happy, and successful, if it weren’t overridden by the b.s. touted as truth, but is low-grade poison.

I, for one, will keep my bedroom clock running on normal, natural time, so I don’t get all messed up only to get messed up again in November.

By the way, if you think that discrimination is gone from the world, look at Japan. I have recently found out why the movie “Departures” was such a big deal. In Japan people who work with the dead are considered the pariah, the untouchable, the lowest caste of society.

It’s a beautiful movie, I have watched it many times, because it is so wonderful. You can watch it in the subscribers area if you want.

The main character of the movie becomes an Expanding Human Being because he is willing to follow his inner guidance, that doesn’t make any sense to the people around him. Watch it. you’ll love it. 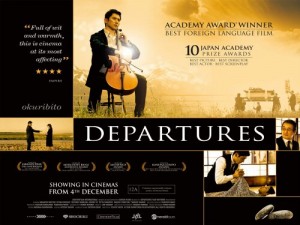