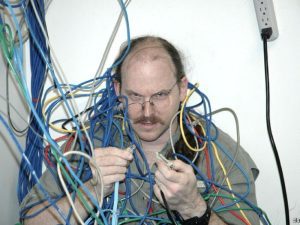 Now that I am aware, awake to this whole issue of judgmentalness, I am starting to see how people are now judging…

Judgment is wholly inside the black and white paradigm, Robert Hartman called it the ‘systemic judgment’ paradigm.

In that paradigm something is either wrong or right, and there is no cure…

Here is what, repeating from the title, a teacher of mine says about a mindset… in his case in marketing.

He says it is a bad wiring… but what do you with bad wiring? 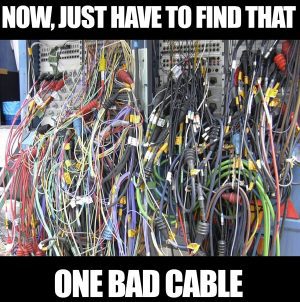 You untangle the wires and reconnect them correctly. That you cannot do inside the ‘systemic judgment’ paradigm, because there it is impossible. Same with mental/emotional hangups… If you have a hangup you can look at it, and change your mind given enough proof that what you have been thinking wasn’t a good match to how things are in reality.

Judging is not the only result of bad wiring. Another one is not assuming the boss position in your life.

I don’t mean bossing people around. That is also bad wiring. 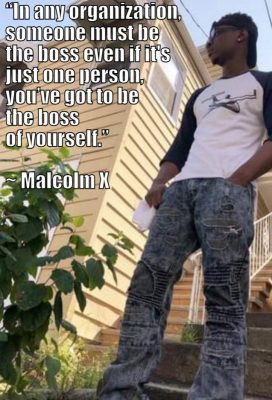 No, being self-possessed… self-directed, self-determined.

Knowing what is your priority, and holding to it steadfast, even when other people try to tell you that their priority is more important than your priority.

This whole conversation is what I had yesterday with Bonnie in our Friday podcast call. 90 minutes of chock full of nuts.

Why is so vital, so important for you to be the boss? To be the one who calls the shot?

And then the only recourse you have available for yourself is judging. Complaining. and self-hate, even depression.

Becoming a person, becoming the boss is a process and will probably take a long time, because it has many aspects, many phases, and each needs to be practiced and made innate separately.

Obviously I am not saying: be a boss over other people, unless you are actually their boss. But if you are, don’t be a buddy, don’t be a pal… it is bad business to do that.

One of the most important distinctions of being a boss is ‘having‘.

Whatever wants to boss you around is a ‘thing’ that you could have power over if you just mastered having.

Having needs you to have a little distance from it, and a little freedom from it, or you have handed your power over to it.

And even though we all have power over stuff, potentially, but we don’t take it.

You literally refuse to take the power, the steering wheel, the controls and then you complain, gossip, judge, weep, and have no life, no Self, no joy, no nothing.

All because you don’t learn the distinction ‘having it’ and don’t fully practice it in life.

Resisting: who has the power?

You may think that resisting gives you power, but what has power in the moment of your resisting? The thing you are resisting. You cannot just walk away from it… it hold you right there, resisting it.

And you may think that avoiding gives you power, but just like with resisting, you are hooked.

You justify? Who has the power?

And you may justify, explain, but sorry, you didn’t exercised your power, and explaining it won’t make it so.

Why is there a distance needed between what wants to call the shot and your eyes? When the thing is close to you, when you are maybe even in the midst of it, you cannot be the boss… you are the effect…

To be the boss distance is needed. Emotional, intellectual, physical distance.

Just put your palm close to your eyes… You can’t even see it, and it becomes scary.

Fear: who is the boss?

Are you the boss or fear is the boss? It depends on the distance. If fear and you are close, entangled, then fear has the power.

Same with hunger, same with other urges, and this lack of clarity, lack of distance makes you a chump, a thing, a hapless object moved by things other than yourself.

Even if you have words that make it sound like you are choosing… you aren’t.

You want to… who is the boss?

If any of those tricky words are there before the actual verb, they choose, they are the boss, not you.

If you are more intelligent than a sack of potatoes, you can hear the begging with the first, and the power with the second.

I used to be, and to some degree I am still like you.

I used to lose it when I was on the phone and there was a call waiting. Of course, I didn’t know what was missing. And I don’t remember anyone teaching me how to be the boss, how to call the shot.

A call waiting is an exercise in shot calling… stay with the original call, or switch to the incoming?

So is the service provider’s issue: they are on the phone and someone shows up in their waiting room. Stay on the phone or hang up and run to the client, patient, or whatever they call the new person.

Or let’s look at the exercise of getting up in the morning.

And then the morning comes, and the bed is so warm. And you could think the day through… Who or what is going to choose?

Or you say: I am getting up, and there you are, your feet are on the floor, and you are up.

I practice this every morning.

In fact this was the first thing EVER I managed to be boss with.

You can’t run before you can crawl. Who is boss?

You see, this is why I said it will take long if and when you take it on.

I muscletested the food list for two people between last night and this morning.

Both are extremely restrictive, because their health numbers show significant health issues…

Obviously with their current level of ownership, ownership of themselves and their behavior the food list will not be honored. And their health will further deteriorate.

By the way, the situation is quite normal, I think. At least for me.

I need to completely overhaul my food list every 120 days, because something new is starting to fail… But, of course, I am old…

And what was healing me 120 days earlier may be harmful now… Why? Because some things changed.

I used to be Keto… and at a point it made me feel very bad. I muscletested and suddenly I was not allowed to eat ANY animal proteins. Now I can eat some fish, occasionally, some cheese, some eggs… But really not much.

So I have learned to cook Hungarian vegetable dishes… they are very tasty and don’t pretend to be anything other than vegetables.

Making a vegan dish look and taste like meat? Who is the boss?

Not like the so-called vegan dishes that pretend to be hamburger, or chicken, or something animal based.

This is, again, a ‘who is the boss’ issue. If you are vegan but make pretend meat dishes, then you have zero power, and you are a chump, a putz, a puppet on a string.

Why? Because you have a big because, instead of being cause yourself.

Because? Who is the boss?

Inside you suffer because inside you are a victim. Ugh.

You can now get the single call I had with Bonnie yesterday (221028) and learn what this whole ‘who is the boss?’ thing is. You’ll get it when she finally gets it.

And, of course, you can also subscribe, and pay next to nothing for the call… It is you who should decide, not your money. Not your greed. No… you. You’ll experience that you have probably never chosen anything, never in your whole life. That is why you feel powerless, because you haven’t chose to live from your power.

And why? Because you never learned that you could. Never learn how to. Because all humans are born with the need to learn everything… it is not a born in faculty… not at all. And society, your family, your workplace insists on you being an object, easy to manage, easy to use, easy to ignore.

OK, here is the buy button for the call…

Learn how to be the boss in your life

Don’t forget we have a workshop today at 11 am EDT: Integrity Live. We’ll distinguish a big part of why you don’t have a Self, only an identity… something you decided, mistakenly. Something that sucks all the joy, all the aliveness from your life… unless you see the damage it’s doing to your and your life.

And this coming Tuesday at 2 pm EDT we’ll look at all that judging you do, and I’ll teach you the way to grow out of it… so you can start living in a bigger world, where you can be a lot happier. Free to be yourself. Finally. If you are in Europe, the time difference will be an hour less, I think!