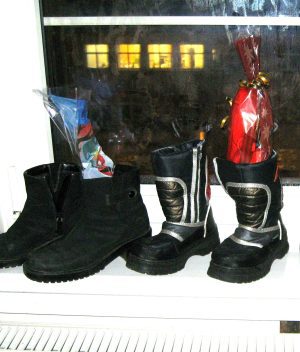 Santa Klaus’s name is Mikulás in Hungary, and of course Mikulas is Saint Nicholas, and his day is December 6. So today it is gift giving day in Hungary, mostly candy and nuts and red apples… as the song goes… in Hungarian.

When people come to me to have their food list muscletested, they rarely think that the food list will ask them to go back a couple of generations to a time when eating was different: you had to buy ice to have an icebox… You gave away half of your venison, or it would rot on you. You stored up goodwill for other times by sharing when it was plenty.

I am old enough to remember those times. 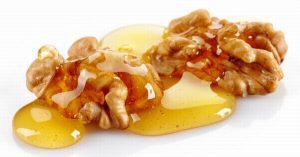 My favorite candy was burned sugar with nuts… yummm.

You pour sugar in a pan, heat it, when it starts to melt you ad the nuts and you keep the whole thing heating until it becomes brownish…

Caramel is another word for burned sugar… 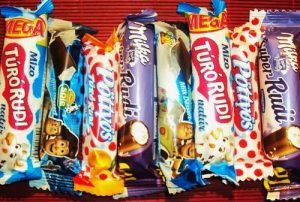 I think I hadn’t tasted real chocolate until 1956. I was nine, and Hungary was attacked from the inside… and we had no food. We lived walking distance from many embassies, including the Austrian embassy, and they were giving out pasta and chocolate. Hadn’t eaten pasta, hadn’t eaten chocolate.

But we had preserves, among them strawberry preserves. For a reason I can’t remember I ate a whole jar and became catatonic from it… My little brother hid in the kitchen cabinet too, he was three, and ate something, so he fell asleep there.

When the shooting came too close for comfort, we all went to the basement.

On November 4, twelve days after the first gunshots… my father came back. His beard grew out, so I didn’t recognize him. I fainted from fright when I opened the door and this man with hair on his face was standing there.

When it all calmed down, school re-started.

There was a big change: suddenly there was a class: Religion.

Most of Hungary is Catholic. I stood up at the beginning of the class and excused myself. Roamed the empty halls and felt hate for them and sorry for myself.

Yeah, that was a long time ago. As vivid as if it were today.

I am Jewish. Not because I really know what that means… but I have a concept… an identity, a self-image. A sense of belonging stronger than family, stronger than country.

I made up, probably, that being a Jew means that I am kinda chosen… Chosen to strive to become exceptional to deserve to have been chosen.

So, unlike most people I know who have decided that they are special, my sense, my meaning is to do what makes me deserve that chosenness.

So for me someone who decided that they are special, therefore they don’t have to do anything, be anyone, measure up to anything is as alien as Christianity itself. It.makes.no.sense.

Being superior with nothing to back it up? That is being a fraud.

99% of humanity is a fraudster… They have a self-image that is higher than what they have deserved to view themselves. By their actions, by their behavior, by their values, by their whole being.

But it is a lose-lose proposition. That self-image holds you back, because you now allowed to do what would earn you the privilege to view yourself as high as your self-image, because then everyone would know! And to boot, you have impostor syndrome, because you actually KNOW you are lying.

My hunch is people don’t call their politicians on it, because the politician is just like them…

So what is one to do if one is interested in integrity where they can love themselves and they can live a life they love?

So in a way it is a fixing… because your self-image is wrong. It doesn’t serve you, and that is really bad. 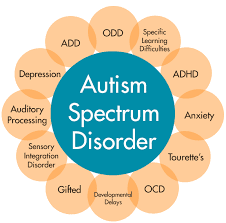 I am autistic. On the spectrum, definitely dyslexic. Probably also Asperger’s… or was it Tourette’s? because I could never manage to not curse… and I hear Asperger’s have that. And I am also awkward…

So I have given myself permission to be awkward, to be like a bumbling idiot. And laugh.

Does your self-image allow you to be whatever you want to be? Are you free to be yourself?

I have clients who undeservedly behave like a superior person to others, correct them, teach them, judge them. And instead of becoming someone themselves, they want to change the other… while they themselves only have a fake sense of superiority, not real.

Superior means: above others. Better in some way than others. Alternatively the higher-ness may come from position or rank, not quality.

The attitude of overly high opinion of oneself is called supercilious… and it can be also viewed as condescending, patronizing, haughty and disdainful… Now you get more of what the ‘victim’ of a superior self-image person gets.

In some cultures women are encouraged to feel superior, and act superior. To abuse and control men.

So it is a big problem. The women fancy themselves deserving… For no real reason.

A good 10% of women feel superior, consider themselves superior to their partners.

The interesting thing is: they don’t feel good about themselves…

So somehow their real Self knows they are not deservedly doing any of that. And they lack real intimacy, they lack partnership, and without that being happy, fulfilled is not possible. Not at all.

I used to be like that. Demanding, controlling, and abusive.

I felt entitled, because I felt a victim, abused myself. Not by the same people… in the past.

So I passed it on. Like the person whose boss yells at him, he goes home and kicks the dog… Like that.

Entitlement is a zero-sum game energy, the energy that wants you to come out as a winner… where you have rigged the game.

In a real game only what someone brings talent, effort, skill to the game is what allows them to win.

Entitlement says: I have already won because I am entitled… and no talent, no effort, no skill is necessary.

People with a superior attitude are slackers… even if they pretend to be a whirlwind of activity… it is a smokescreen.

I can track it by their cell-hydration, by the way. Somehow their pretense shows itself clearly there. Their real self punishes them… I think. Just a thought… although muscletest says ‘yes’.

Anyway, changing a self-image to something that will allow a person to behave normally… because normal is missing, is not easy.

By normal I mean healthy. In flow with life. In a ways that the Hillel lines say: If I am not for me, who is for me? i.e. you attend to what you need, instead of hoping, waiting, that someone else will. If I am only for myself, who am I? i.e. you don’t put someone down so you can feel above, so you can feel good about yourself. And if not now, when? And you do it as consistently as possible.

That is what I call ‘normal’.

9% of the time I am not normal. What am I? I tend to be my worthless self in those 9%. When I am not happy. When I don’t enjoy being alive.

The goal is to be ‘normal’… that is where happiness, joy, accomplishment, satisfaction, fulfillment, and togetherness are possible.

You have two identities… One is the one you decided when you were about three years old. It is a variation of worthless, depending on your personal and soul correction bend.

The other is to fix it. All the other ones, the fixing ones are abusive in one way or another. Desire to receive for the self alone.

Whether it is ‘I am talented’, or ‘I am pretty’, or ‘I am perfect’, or ‘I am special’ or ‘I am funny’ these are entitlements… and are designed to take something that doesn’t belong to you, something you didn’t earn. And design to actually discourage you from earning your keep, earning you a life worth living.

That discouragement is my main concern… by the way. That never doing anything much of what would earn you a life worth living.

Because ultimately at the end, that is the only thing that matters. Did you live a life worth living?

This Saturday at 11 am we’ll endeavor finding a suitable and potent new self-image for you… on the way to becoming ‘normal’.

The self-image is made with words.

Here is an example: ‘I have the energy to do what is mine to do‘ is a self-image. This is for those who claim that they can’t, or don’t have the energy or the time. You can see that by claiming they can’t… they are really referring to the original ‘worthless’ as still the dominant factor.

‘I can become better‘… ‘It’s a process. It takes as long as it takes‘

As you see, self-image and worldview are intimately connected…

Underneath the inflated self-image is an inaccurate worldview that makes it impossible to be ‘normal’.

So the goal is to adjust the self-image, incrementally, iteratively, to get as close to ‘normal’ as possible. Because normal is the key to the good life: health, wealth, love and happiness.

If you think you are happy to try your hand on becoming normal, this workshop may be for you.

Invent your way to happiness
PS: My ‘What’s Missing?’ workshop is another similar methodology that can, over time, lead to the same place. So if you don’t want to come to a live paid call, you can just follow along the What’s Missing or What’s the Truth About You calls… and start, hopefully, invent new self-image that can take you all the way to normal.