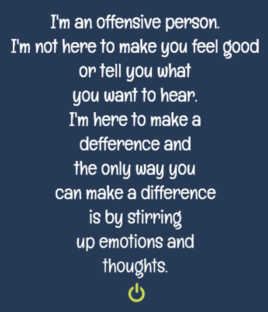 Summary: Now that I have lost my main source of income, I am back to the planning stage. I am back to finding out how to reach people that want what I have to offer: Energy remedies for peace of mind, freedom, power, and are willing to work for it at the same time, instead of waiting for a miracle or a pill or a magic bullet.

I am not often confronted. Being confronted always means that something or someone has breached the separation between your hidden self and your fake self.

You hide the stuff that you don’t think will work in the world, that will not buy you the image or goodies you want, the affection, appreciation, the job, the friends, the money. 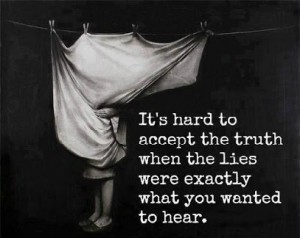 What you hide is big, what you cover it up with is a thin veneer.

Most people have an unwritten agreement that “I won’t call you on it if you don’t call me on it”… and on the “it” they mean your b.s.

It takes a lot of work to hold it together. The fake identity is hollow, and it gives you a hollow life. The below feels threatening, like the thinly veiled magma of a volcano. You walk around it as in on egg shells, to not awaken the monsters below.

Now, knowing what I know about humans, what they are hiding, this is much ado about nothing. What people hide, what they are covering up is an emotionally charge mess of trivial stuff, unfinished business, bad things you did, mistakes you have made, things you did wrong. Because of the emotional charge about it, it does feel and it often acts much like magma… Most of the stuff you hide is not even true. It never was. Not in the least.

When your depth and your surface are the same, it is called authenticity. Through and through the same. Rare, indeed. The more authentic you are, the more work you have done through revealing and taking responsibility for what you have been hiding, for what happened. The more authentic you are the higher your vibration goes. That is a constant and ongoing work for someone who wants to raise their vibration.

When you are hiding stuff, it uses up most of your energies, and your brilliance.

You struggle through life, whether it’s a visible struggle or not, you are working with your hands tied behind your back.

Your brain cells are busy

If I ask you who you are, you are in trouble. That question triggers a rumbling of the lava below the surface: you try to avoid that question.

So, when you look who you are, you really don’t know. No identity, no sense of self.

Now, here is the article that acted as a confront to me this morning: 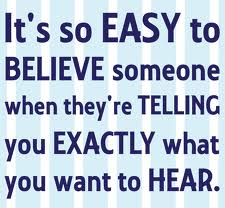 People will direct their attention to whatever gives them a sense of identity, purpose and adventure.

You must always remember this when crafting advertising. (Roy Williams is an advertising guru)

A grandmother adores her grandchildren because they give her identity… purpose… and adventure.

Do you know what a rock collector gets from his rock collection? Identity, purpose and adventure.

Each of us – every one of us – is on a treasure hunt. The differences between us are found primarily in the things we value. When a person doesn’t value what we value, we think a little less of them. They are obviously shallow, stupid, deceptive or evil.

Those who live below or above the search for identity are effectively immune to advertising. The first group can’t afford what you’re selling and the second group doesn’t care. These people are rarely prospective customers.

Businesses exist to meet those needs, satisfy those hungers and fulfill those dreams.

We make and spend money primarily to discover who we are.

This would be sad
if it wasn’t so much fun.

Roy H. Williams creates advertising addressed to people’s surface… and he is spectacular at it. I “play” to people’s REAL desire, and — HERE IS THE CONFRONT! — may not be talking to the people, may not be reaching the people who are ready to become an Expanding Human Being. That is what the Soul wants, and not what the surface, the identity…

Here are some of my raw observations:

Giving people what they want is what makes money. But it has no integrity for me. It would make me inauthentic.

People who were looking to find money, health or smarts aren’t interested in doing the work that is needed to raise their vibration… not until they have handled the lack first. Catch 22.

Which means that unless I find something that fills what people want, I won’t make money.

If I can give them something that they need and want, I can have a customer for life… but what is it?

People love to go to retreats, even if they are confronting, because they have bonding, they see that they are not alone, and they do the release of the magma pressure in like company.

When they leave the retreat they are smarter, healthier, and can make more money, for a little while. When it gets bad again, they go to another retreat, so they can be cleaned out a little bit again.

But it doesn’t raise their vibration, because it is like cleaning your house a little bit every once in a while: the nasty stuff is still there under and inside.

If you care about me, at all, please share with me how you got to my site, and what it is that you’d have liked to find, instead of what you did… You can email me if it is more comfortable, sophie at yourvibration.com

I really would like a lot of feedback this time. Thank you.

5 thoughts on “Are you my ideal customer? If you are, how did you find my site?”