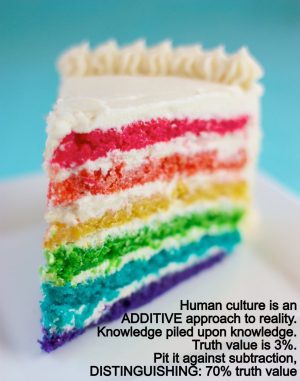 At or after your original incident, you invented yourself first.

In fact, most people invented themselves many times… creating themselves as a layer cake.

I am not a baker. My mother didn’t have a working oven until I was about 10… maybe that’s why I never warmed to cookies and cakes.

But I am a brick mason… and bricks are laid much like the layers of a cake. If the previous layer was crooked, the wall will be crooked, and maybe it will even fall down.

The created self is crooked. Each layer tells a story that doesn’t quite fit with the other layers.

…resulting in erratic, inconsistent behavior, and unexplainable bouts of sadness, guilt, and confusion.

This is due to the way those layers of identity were invented. Additive, instead of subtractive ‘manufacturing’.

Luckily it is never too late to have a happy childhood.

It is never too late to create a new self. A self that is stable, clear, coherent and congruent. That has inner integrity.

So how do you do it?

With the subtractive method, aka inversion, aka the strait and narrow. We have called it previously the Michelangelo method, also the Anna Karenina Method…

Alas, although those poetic names sounded very good, no one, literally no one considered it a DOING job… everyone was waiting for miracles and magic.

The nature of reality is that miracles and magic are caused. Caused with restriction.

…while the 1000 gained their power through restriction, subtraction. Restriction that they are performing day in and day out, joyfully.

You want their results, but you don’t want the restriction?

If that is you, don’t waste your precious time reading this article: it will bother you… so don’t. 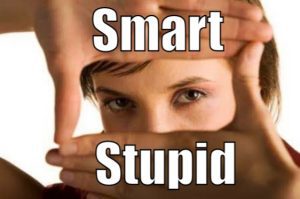 Here is one of my first restrictive, subtractive moves I’d like you to emulate. I did it back in 1996. It resulted in removing my frame of reference to everything: smart/stupid.

I declared that I was stupid. Not to make myself stupid, like in the additive method, but to remove both stupid and trying to fix stupid. The frame.

I did that to remove my previous frame through which I looked at everyone, including myself: smart/stupid. I tried to be smart, despised everything and everyone stupid. I was miserable AND widely hated.

After declared my intention to remove the smart/stupid frame,

Did the declaration remove the frame?

No. I still had to and still have to remove it every time I look through it. Nothing is automatic. If you thought declarations create miracles, you are probably wretched, because they don’t. You do. With work. With restriction.

Restriction in the moment sounds like ‘no. I am not going there. I am not doing that.’

That no is sober. No passion, no argument. No. It is a sober statement I obey. And occasionally I don’t. 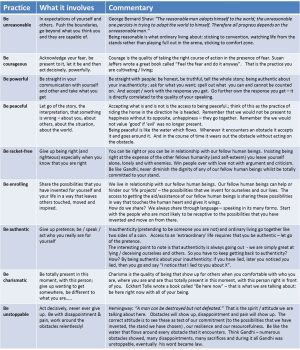 The second restrictive move came a few years after. I am sharing it because the language of it is so different.

I said: ‘There is no way I am going to be anything less than magnificent!‘

Did I mean I was magnificent? No. I was going to be guided by not doing anything less than magnificent.

So what is magnificent?

It is all the extraordinary ways of being.

Being late, being barely on time, justifying, explaining, blaming, avoiding responsibility, just doing what I was paid to do, telling the truth, taking care of things and people… these are all ordinary ways of doing life. I won’t go there.

Between you and me, I placed the bar miles above Ben Franklin’s… I am somewhat successful at what I have set out for myself…

Your congruence is, after having buildt your crooked layer cake self is maximum 10%.

Which means 90% or more incongruent… 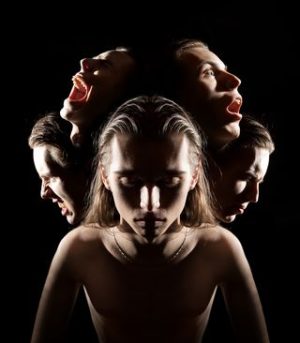 If you often find yourself doing things, thinking things, saying things, behaving like you had multiple personalities, this is the reason.

One moment you beat yourself up. The next you beat someone else up. You are funny and then you are down in the dumps. Ugh. 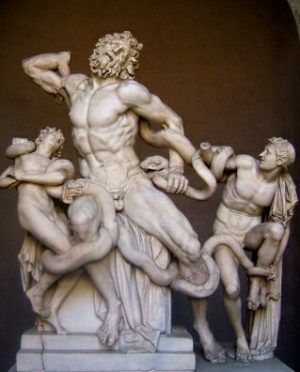 Michelangelo was a rare specimen of a human. He was able to visualize a sculpture in a block of marble, and then he painstakingly removed all the stone that wasn’t what he envisioned.

Unfortunately an ordinary human cannot do that. Instead they do the layer cake method… no rhyme, no reason. Reactive. Additive.

Even science is like that… our science. Adding stuff… 10% truth value!

If you are interested in the ‘take away’ method of becoming the best you can become, your first job will be to remove your main issue, your main frame. Mine was ‘smart/stupid’.

We did that in a recent workshop.

And set out to weed it out. Like I did. 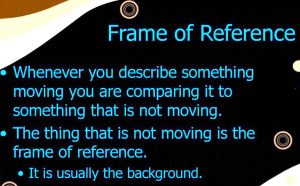 Until you weed it out, you can’t see anything other than your frame of reference.

That is how you know you are succeeding.

If what you continue to see is still all about you, and all inside that frame, you’ll know that you are not succeeding.

For example, if you are in the 67 coaching program, your reports will be talking about only what belongs to the frame, and not much of what is being said in the audio.

That is one of the brilliant uses of that program: monitoring yourself and your frames.

PS: To summarize, the method asks you to remove something, instead of add something.

It is a challenge, but it is worth learning to win at it.

That is the method… and because it is based on a sound principle, it can take you to health, wealth, love and fulfillment… a life well lived… coherent, a life lived with integrity.

PPS: Subtractive moves are powered with HATE. Hate is your jet engine. All human culture is powered by the propeller: desire.