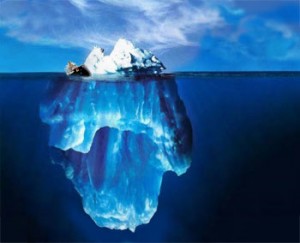 Why Am I Miserable? Why You Are Miserable? The Most Binding Agreements Are The Ones You Never Made

I had a session with a client. The conversation went to one of my ‘favorite’ topics: why wives stop wanting intimacy after the children are born.

This is a big issue for men, and destroys many marriages.

The topic, the issue, reveals the tip of a significant iceberg.

You recall from your studies (I hope) that icebergs are those big chunks of ice, the shape of a pyramid, where only the tip of that pyramid shows above the water level, the rest of it is underwater.

If I remember correctly, hitting one of those is what sunk the Titanic.

With most things in life, the invisible part is what wreaks havoc, unless there is an awareness.

Law of Attraction teachers teach about that. Transformational coaches cause transformation by simply revealing that. Medical mediums, medical intuitives cause an opportunity for healing by simply seeing what’s hidden.

This article is an exploration for my book on the unexamined life. Living an examined life gives you the power of the Original Design, where you safely and skillfully navigate the waters of reality, where you actually live like the Powerful Creator you are, instead of languishing and creating what you don’t want.

The following is an exploration of the machinery underneath one of my behaviors that has robbed me of being able to be in relationships and have power. It is exploring the machine: most of what is being said is said by the machine… so listen, please, that way. OK?

I had an interesting experience last Saturday: I was on a webinar with a client/coach of mine. I observed her being just as friendly and just as warm with all the people on the call, as she has been with me. I felt a pang of jealousy, and it felt bad.

I started to pay attention, enrolled Source in looking with me (you can never have enough help!) and what was there, underneath: I claimed this person, and she is mine. WTF!

Not only that, I also saw that I expect people to claim me, and if they don’t, I know they don’t love me.

Not like there were any conditions, no. Often I didn’t like the other person. Often we didn’t have a good time. Often they were abusive, etc. But the machine didn’t care: I claimed them, they claimed me, and we were stuck in a relationship that didn’t work.

Now, listen up: the next phase was: I stopped doing the things I liked to do. I stopped pursuing my goals. I stopped having friends. I started to turn myself completely over to this person. I was claimed, and that is what a claimed person does!

When I eventually came out of these “relationships” I was alone, no friends, no goals, no money…

Now, let’s return to the client and the wife who doesn’t want intimacy.

It goes like this: we live in a monogamous society. It is not the natural way: men, at some point, decided that it gives them more power if they combine their fortune with the wife’s family’s fortune, and create a clan.

It’s OK, I am not knocking it, but you need to know that it didn’t come from our higher, or even our lower nature, it came from an economic consideration.

When a woman needs to choose between her children or her husband, that choice is not by nature and not by design: it reveals a cultural conversation, that is like an immersed iceberg: you can only be claimed by one party, not two. A version of monogamy, I suppose.

But if this iceberg were revealed, and women saw what is the rule that is running the show, I bet they would choose continued intimacy, partnership, warmth with their husbands and taking care of the children as compatible, and healthy, side by side activities, or commitments, not as an either one or the other choice.