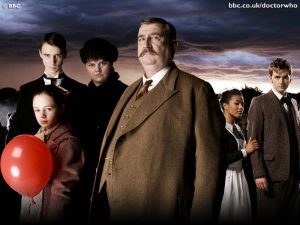 At any moment what you do, what you think, what you say either comes from the inside, your core, or the outside…

And depending on the source of the action, thought, you are either true to yourself, or true to something else.

There was a two-part episode of Doctor Who that I watched some years ago, the episode ‘Human Nature’. Watch it if you can.

So… in that episode, the Doctor (actor David Tennant) is under pressure from The Family. So he decides to become ‘human’ and hide his Self and purpose. His sidekick is Martha. Her job is to keep him safe and to remind him, when it is time to return to who he really is.

What is special about this double episode is that we see the same unit, person… from the outside. In one part the Self is in control, in the other the periphery. And we can see the change, almost instantly the switch. Masterful directing, good acting.

If we go back to the warship analogy of the book ‘The Art of Hunting Humans‘, in one part you see the captain… and then you see the crew, and then back again.

Depending on how you look at everything (your worldview), you’ll look at stories, other people’s lives, in life and on the screen the same way. And likely you see the life Doctor Who was going to live as a human as superior to his captain driven life: to save humanity and the Earth.

He would have a lover, a job. He would be respectable. To everyone’s eyes: he would belong. Right?

While he would be cut off from his core, his Self, his purpose, and would become mortal: a dog wagged by the tail.

A country lead by the hangers on, each argue for their self-interest.

What would happen if we created a movie with a person who in one part is being himself, and in the next being the dog that is wagged by the tail, and then back again, paralleling the Doctor Who story? Would you be able to see the difference? Would you favor one part to the other?

The other very remarkable and astute thing was about that episode was that the David Tennant character wasn’t conscious of any of it. At all.

And that is very important: when your vibration is low, when your intellect is lagging, the only thing you notice, if anything, is physical or emotional. That maybe you don’t quite enjoy work that day. That maybe your back and shoulders ache because you were eagerly leaning forward to suck the morrow out of whatever you were doing.

But mostly you don’t know. You are unaware. But why?

Because until you consciously choose to be the captain, and hear all the voices. The voices vying for your attention, vying for dominance. but regardless you do what you are called to do from the inside. Until then you are a passenger in your life, not the driver.

A passenger is taken wherever the vehicle goes. And all they are aware, if at all, is where they went, what they feel, and their thoughts. No matter what.

So the most missing piece to experience life differently in the two states is the conscious choosing to drive or not.

Doctor Who locked away his Self when he was hiding as a human.
You never realized that you have a Self… so it has been as hidden as if it didn’t exist.

You and eight billion others.

What cuts you off, very effectively, and maybe even cleanly from your Self is who you think you are. Your Precious I. Your persona.

In my call with Bonnie on Friday, the podcast, I share two ways two people are doing the Prison Break (67 steps), depending on their persona. Two extremes.

If they were travelers,

So how would one be, if not the persona drove their vehicle, including how they do the program?

The purpose of the program is to take you around, and widen your big picture. To expose you to how other people, your betters think, and do things. To make your thinking, your rigid worldview more malleable. More humble. Able to learn. Make you more flexible.

The more you see the more dots seeing creates in your brain. And the more chance you have for a coherent and informed worldview. A worldview for success, happiness, fulfillment. Because all those many dots can be connected to give you a clearer view of everything.

Most people, when they start, have no, or hardly any connectable dots.

Using Paris as the city, neither of them noticed that the buildings are all the same style by the same architect (Mansard). That the bohemian quarter by the Seine is fake as a two dollar bill. That you can hear the old songs by harmonica in your head. You wouldn’t know that the soul of the city is gone… nothing is French about it.

It’s not an accident that Source was forcing me to watch the Inspector Morse episode where the tour bus visits Oxford. the two kinds of tourists were perfectly shown: one is a stickler for details, the other not seeing anything. Recognize the two archetypes?

Until you do what you do from the purpose and the vision your Self wants to fulfill, you are a reluctant tourist in a tour bus. ‘Are we there yet?”What’s for dinner?‘

So if your life WERE a bus, and it would be full of democratic voices. Some bullies, some weaklings, what would be your battle plan to gain access to the steering wheel?

About 90% or more of all the time the driver is the self-concern. Concern for the protection of the precious I, the false self.

Making sure that you (the false you!) are right, that you look good, that you avoids any domination, that you wins every moment.

And if anyone tells you otherwise, then you argue, justify, explain, or claim that you couldn’t help it. Because that is the way you are.

To recognize the false self, and take back the driving you need to develop awareness. Self-awareness.

What you have, the level of self-awareness is self-blindness. And because the fake self, the false self is driving your life, to get to drive, you need to know the current driver… or you won’t.

The easiest way to ease into this self-study, studying the false self, is through soul correction.

If you look back at the tourists visiting Paris, their behavior is entirely consistent with their soul correction. The eager beaver’s soul correction is ‘Forget Thyself’, and the laconic ‘this is enough’ person’s is a ‘Sexual Energy’.

Soul correction, performing it, is moment to moment… and doesn’t last. It is difficult… but necessary if you want to live a life really worth living.

I am now offering a new program: Soul Correction Coaching… in email. It includes a brief 1-0n-1 with you being on video. Your body and your behavior are often the first things to adjust. To be able to coach you, I need to see you.