I just had a client, he just left. During the conversation I kept on returning to his relationship with his wife. At some point I was clear what course of action he needs to take for his health.

I started to tell him… As usual, I was listening for the echo. The echo tells me whether I am getting through to him or not. I heard no echo.

Although he came to me, although he tried to, he didn’t trust what I had to say to the degree that he could even contemplate following the instructions.

The only thing that alters it is action. Actions that come from outside of that world.

Every action that comes from inside the world, perpetuate the world. Justifies the world.

When I say that instructions to do something that don’t make sense have a chance to enlarge your world, allow for the changes you crave.

But how are you going to do the thing that doesn’t make sense? After all, if you live like

1. you need to understand what you are doing
2. you need to see what will happen
3. it needs to make sense to you

All the changes in my world have come from actions that didn’t make sense to me. 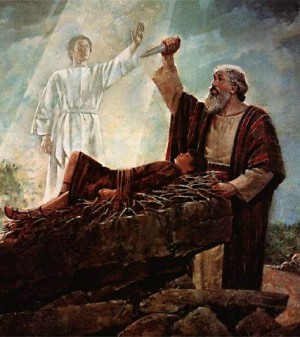 Kabbalists (people who are expert at interpreting the texts of Kabbalah as if it were a code: the meaning below the meaning) say that the incident in the Bible about God asking Abraham to sacrifice his son Isaac is to illustrate this conundrum.

It doesn’t make sense to do what God asked you to do. But unless you do it, you’ll stay where you are…

If you know the story, Abraham travels to the altar where sacrifices are done, binds his beloved son to the altar, and raises his knife to strike, when an “angel” grabs his hand and averts the sacrifice.

If you believe this story as fact, historical or other, I have an oceanfront property to sell you in Montana.

But if you are like me, able to get the true meaning of what happened, you can see that Abraham was instructed to do an action that didn’t make sense from his own world, but made all the sense from where the instruction giver looks from. Abraham suspended everything that was real for me, for a moment, and did what he was instructed to do. The result: Abraham went from this old guy to the father of a huge family, all the Jews.

His world got bigger, much bigger, and from their he could see context, and connections, and truth in a whole different way.

The bigger the “sacrifice” the bigger world it creates.

Every result you have ever produced through my teaching came from suspending you disbelief for a second, and taking an action that was outside of sensible, outside of sane, outside of makes sense to you.

Every breakthrough program operates under this principle, with mixed success. Firewalking is a good example that illustrate why it may work, and why it normally doesn’t work.

A company and assistants prepare a walk of some length covered with hot coals. You are instructed to walk without hesitation, without stumbling, fast over it.

There is a crowd and you don’t like the look of it. But everyone seems to be doing it, so you do it. You get through it with a few minor burns.

Now, if you do what most people do, you’ll start to explain it from inside your world, and you will be able to: there is no magic to the exercise. You will stay the same, in spite of the action that didn’t make sense.

If you, on the other hand, come off it with a “WTF? I didn’t know I can do it?” or some flavor of that, then firewalking will start to enlarge your world, and you’ll be more willing to follow instructions to do nonsensical things next time.

You may know that I was participating with Landmark Education for 26 years, and I cut my teeth there.

Nothing they ever ask there makes sense. Not at all.

To the degree that a participants followed instructions, to that same degree their world became bigger.

On the other hand, if they had any explanation that made sense of the instructions, it stopped working.

Your mind wants to explain it. It wants to reduce it to something that makes sense in your small world. And it stops working.

Your job is to get your head out of your arse, and just do it. What do you have to lose? Your chains? Your prison?

1 thought on “How to grow your world at will? Expand it…”