Yesterday I wrote about seeing reason, seeing the causal relationship between things.

I confess that it is a hard thing to see. Not just me, but everyone. Cause is in the invisible realm of reality… it is there, but it is rarely seen.

The Butterfly Effect comes to mind, that says through a string of invisible cause and effect happenings, a butterfly flapping its wings in Japan will cause a tornado in Arkansas. According to Wikipedia: Butterfly effect: In chaos theory, the butterfly effect is the sensitive dependence on initial conditions in which a small change in one state of a deterministic nonlinear system can result in large differences in a later state.

So it is not easy. But… and this is what this article is about, most people lack even the curiosity necessary to see causal relationships: they don’t care.

If you don’t have a capacity, you also lack the capacity to see what would it entail to exercise that capacity.

END_OF_DOCUMENT_TOKEN_TO_BE_REPLACED 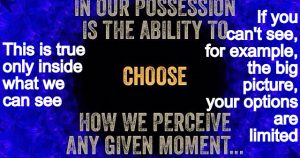 It is starting to dawn on me that the intellectual action of seeing the forest, in spite of the individual trees is not something everyone has been able to do.

Some people, when they are asked to say what is the forest, in our conversations: what is the principle, what is the context, they use jargon… like integrity, or responsibility, the word.

But remembering hearing it doesn’t mean that they actually saw it.

Seeing the forest for the trees is 90% from the DNA capacity: Seeing the big picture, and 10% habit.

After courage, it is the second most missing capacity in humanity.

When activated, it adds 20 points to your IQ.